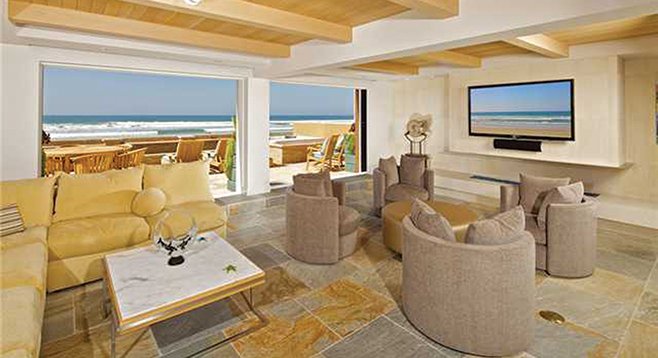 35 feet of ocean frontage in the heart of Del Mar

The property at 2016 Ocean Front Drive includes three bedrooms and five baths within 3061 square feet of living space on a 3920-square-foot lot. While that may seem small, especially given the whopping $17,500,000 asking price, location is everything. The home sits less than a mile from both the front gates of the Del Mar Thoroughbred Club and upscale shopping and dining in the downtown Del Mar Village area. 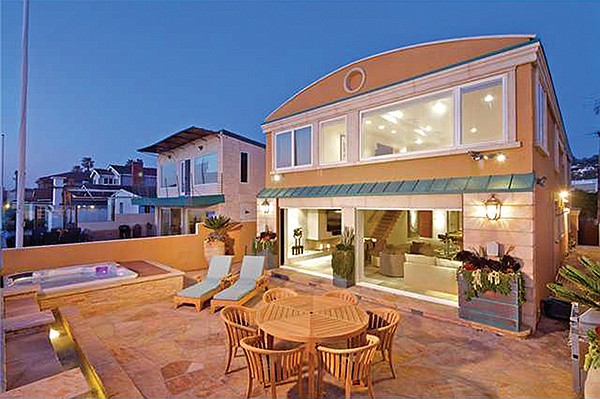 Thirty-five feet of ocean frontage in the heart of Del Mar are included, with a large outdoor deck, lighted water features, and a spa wedged against the seawall along the property’s western edge. An outdoor shower with intricate custom tile work provides a place to rinse off beach salt and sand before heading indoors.

Once there, two large window walls retract into the ceiling, lending an indoor/outdoor air to the downstairs great room. A white granite and limestone fireplace can help warm the space. The kitchen and living room both feature exposed wood-beam ceilings and quartzite flooring.

The kitchen features Caesarstone counters, a marble backsplash, and an “expansive island trimmed in white oak and surrounded by the ultimate in high-end stainless appliances.”

Upstairs, the home has a cozier living/home theater space, and three bedroom suites. The master includes a study area, with a large desk and countertop occupying the otherwise window-filled western wall.

“Whether savoring dazzling views of the Pacific coastline in the privacy of your sumptuous master suite or hosting the party of the summer, it doesn’t get any better than this,” concludes the listing.

Public records indicate the owners of the property are W. David Sykes, CEO of a digital sales and marketing firm, and Lori Sykes, a real-estate salesperson who is also acting as the listing agent of the property.

The home, which records show was built in 1960, last sold in 1996 for $1.625 million. It’s apparent, however, that extensive upgrades have been made since then.

The most recent attempt to sell dates to mid-April, when the home was put up for sale seeking offers between $15.5 million and $17.5 million, a price that remains unchanged to date.

Sounds like they're expecting a Malibu "movie colony" price for this place. Don't hold your breath, Sykes.

Nah, a place this size in the Colony would go $20million easily, probably closer to $25million. Del Mar just doesn't have the cachet the the Colony does