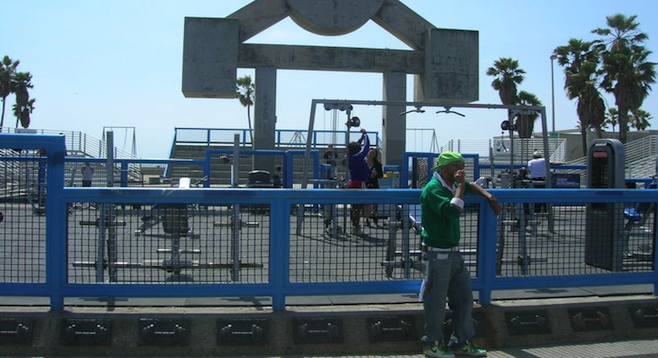 (Venice Beach, that is.)

A shirtless hippie with long, flowing hair and an orange tan gives me a wink as he floats by on his bicycle. After a few minutes, a large man carrying a CD player and headphones tries to get me to listen to his demo tape. Later I'm serenaded by a bearded guitarist wearing rollerblades and a turban. 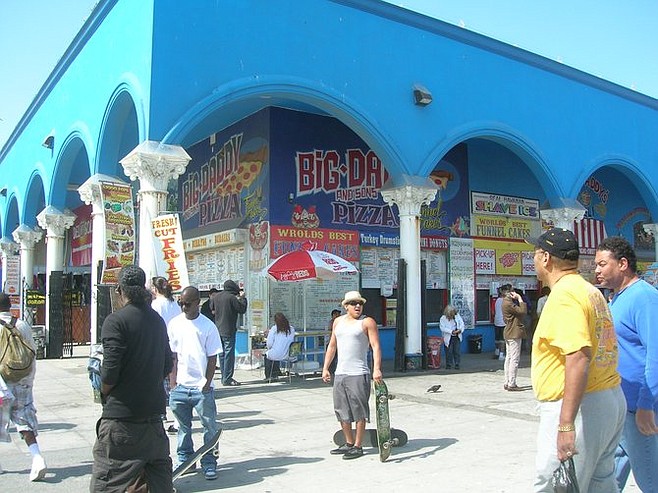 Skaters on the Venice Beach boardwalk.

Founded in 1905 by tobacco mogul Abbot Kinney, Venice of America, as it was originally called, was conceived as a beach resort town. Kinney drained the marshes and built the canals that gave the place its name. Over the years, the neighborhood has kept its unique flavor, resisting (though not always successfully) the growing gentrification.

This is the first stop on my day trip from San Diego with my brother and sister. My siblings had never been to Venice before and wanted to see what all the fuss was about.

Not everything we heard was positive. Many called it a tourist trap. Some called it a dump. But Venice Beach has never billed itself as paradise – the grit is part of its charm. If you just want a tan, there are better places to do that. If you want something different, well, Venice has that in spades.

What really sets it apart are the street performers, and they come in all stripes. We sit down on a grassy patch under a palm tree, munching on our chicken tenders, as we watch breakdancers, fire-breathers and knife jugglers put on a show. 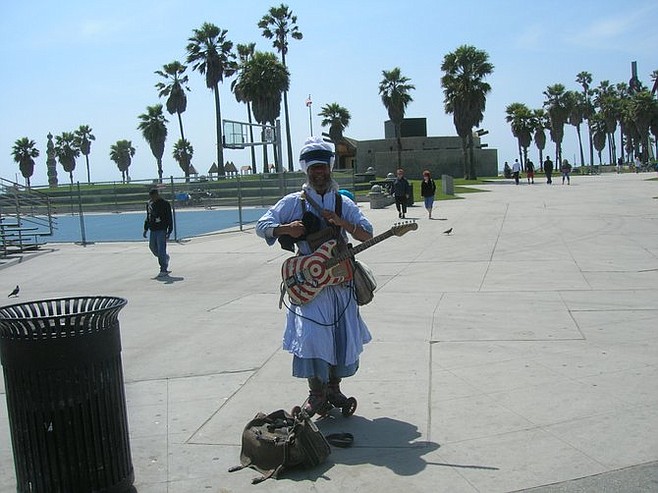 The most iconic busker is Harry Perry, the aforementioned rollerblading guitarist who is to Venice Beach as Mickey Mouse is to Disneyland. Perry, whose face has been baked bronze by the California sun, has been performing on the boardwalk since 1973. He sounds like a West Coast David Bowie.

Film buffs will appreciate the long list of movies that have been shot here. The beach has been used as a location since the early 1900s. The basketball scene from White Men Can't Jump was filmed here. As was Lords of Dogtown, American History X and Speed. Even Buster Keaton once walked these immaculate shores.

Muscle Beach, of course, is the bodybuilding Mecca. Marked by a huge concrete barbell, this outdoor weightlifting pen has hosted such big names as Arnold Schwarzenegger and Franco Columbu. Decades ago, these iron gods prowled the shores, sculpting their massive bodies to the delight of gawkers. For $10, you can get a day pass to work out where the greats once did.

The neighborhood has long been associated with skateboarding. In the 1970s, the sport flourished in Santa Monica and Venice, spearheaded by talented young skateboarders such the legendary Z-Boys. The 16,000-square-foot Venice Skate Park, which opened in 2009, sits right next to to the beach and is open to anyone up for navigating its twists and turns. 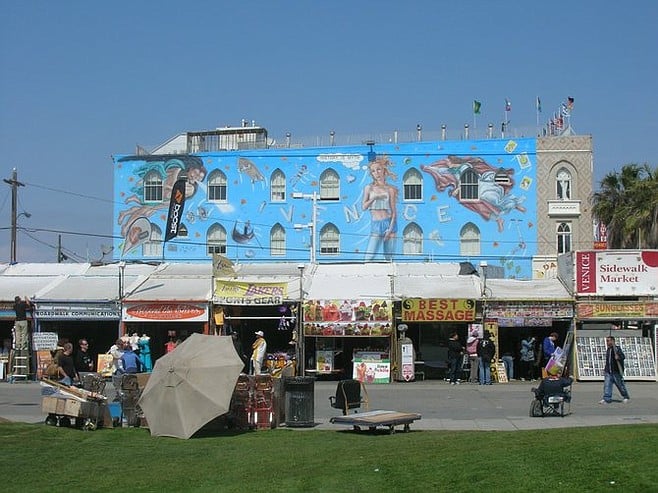 Venice isn't a place known for its art, and that's a shame. Beautiful murals dot the area, adding color and life to an otherwise drab cityscape. Look out for Venice Reconstituted, a reinterpretation of Boticelli's Venus of the Half Shell by muralist Rip Cronk at 25 Windward Avenue. The most stunning is the 50-foot-tall Touch of Venice mural located on the eastern side of the same building. It was painted by the artist Jonas Never in honor of the landmark Orson Welles film The Touch of Evil that was shot in the area.

Good food isn't something you have to worry about here. The Sidewalk Cafe on Ocean Front Walk has a huge selection of burgers and sandwiches, and the Venice Ale House a little further up north on the boardwalk serves great seafood. I recommend something unhealthy and dripping with grease. Eating a salad here just doesn't feel right.

We've reached the last performer of the day. He pulls a couple of guys from the crowd and dances with them for a few minutes. For the finale, he puts on a Batman mask and is lifted up by volunteers as the Batman theme music swells in the background. My siblings are unimpressed, but I'm laughing and so is the crowd. Only in this little corner of the world could something like this work.

At its best, Venice Beach is a unique slice of Americana that can't be duplicated anywhere else.

My fav memory of Venice Beach: the vast array of medical marijuana dispensaries and "health clinics" that flourish along Ocean Front Walk. I rented a bike in Venice and headed for Santa Monica, seeing these businesses all along the way. Some even had "Doctors" in scrubs with a stethoscope hanging from their necks waving at passersby with prescription pads in their hands! That place is wild! 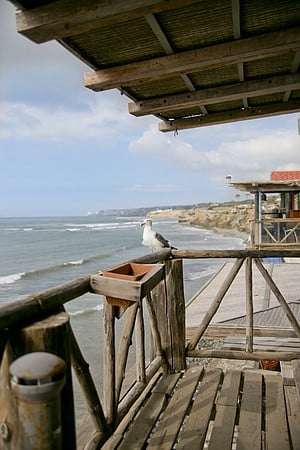