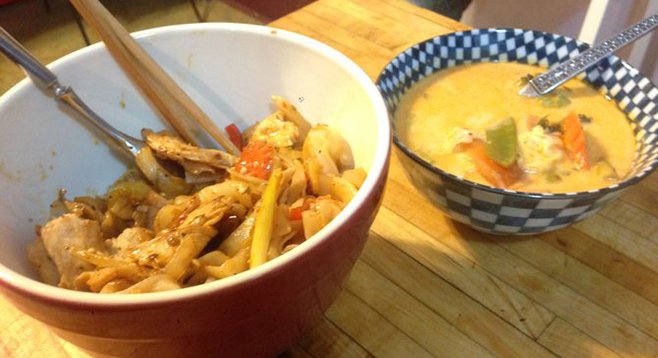 The web at my fingertips, Thai at my front door

Is it possible to make delivery even more convenient?

One perk of writing for Feast! is that I get to eat out a lot. But to look at it another way, I have to eat out a lot. Like anyone else, I have those nights that follow long days, when simply reaching the comfort of my living room feels like a major accomplishment. Those nights, I just want to stay in and eat dinner while marathon-watching the latest trendy serial drama. I want delivery.

This week I had such a night, reinforced by the perfect storm of an empty fridge and a bare pantry. (This storm seems to frequently hit my kitchen.) Somebody had told me about a local online delivery service called BringItToMe.com, so I bit.

The site takes your zip code and gives back a selection of participating restaurants willing to drive assorted food to your home, anything from from sandwiches to sushi. I picked Lotus Thai, triggering one very obvious and important question: is there really a point to this? I've ordered from Lotus before, and they've delivered to my home, all without the help of any web site.

I suppose this is where it gets subjective. Because having ordered from Lotus over the phone, I also know there's a 50/50 chance they get the order wrong. I'm sure there are legitimate explanations for this: poor connection, loud restaurant, occasional language difficulties, people who answer the phones at restaurants typically aren't paid enough to care about anything resembling accuracy.

Ordering online let me choose exactly what I wanted and even add special requests, including how spicy I wanted my drunken noodles. And Lotus did get it right this time, for a mere 4-or-5-dollar convenience charge, not including tip.

Actually, when it comes to tipping, the site makes it really easy to pay your tip amount in advance, offering to auto-calculate a 15-, 18-, or 20-percent gratuity — because it's totally a good idea to decide how much to tip before your food ever arrives.

So the cost of ordering adds up. Don't worry, though, you can make it a "Green" order for a zero dollar charge. And by that, they mean you won't get any napkins or utensils. Your order will arrive in whatever container the restaurant uses. Lotus gives you #5 plastic containers, which fortunately the city now does recycle. Green enough, considering.

Ultimately, bringittome.com provides a platform for restaurants to add online ordering, which is good. But taking a 3-to-4-dollar cut from the consumer seems a little much to me. Necessary to the business model, perhaps, but considering the site merely acts as a middleman for the lazy among us, I find it hard to recommend. Ultimately, picking up the phone doesn't qualify as such a hardship that I'd pay any premium to avoid it.

As for Lotus Thai downtown — it's not knocking anybody out with its Thai and dim sum offerings, but not offending anyone, either. The chicken pad see ew was a little citrusy for my taste, but adequate for $11. At $16 plus tip for delivery, I would pass every time.