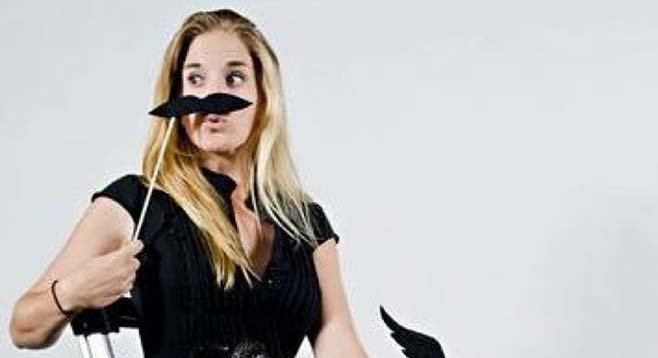 After meeting Samantha Ginn twice, I’m left with the impression that at the end of a long day, when the rest of us drink beer, snap at our children, or numb our brains on reruns of Buffy the Vampire Slayer, Ginn skips through sunny meadows, sings with bluebirds, and feeds deer by hand.

I don’t remember who made the introduction, but I do remember that it took place in the lobby at Moxie Theater following Ginn’s opening night performance in Hickorydickory, in which she played the role of a woman stuck eternally at 17. I also remember that during our brief conversation, the blonde 5-foot-8 actress leaned in toward me, asked questions, and offered sincere interest in my answers as if meeting me were the most fascinating thing to happen to her all week. This, while others at the after-party hovered close by waiting to talk to her.

A year later, when I approached Ginn and reminded her of our first meeting, she let loose a great big “Oh, yeah!” of recognition, and said, “You have babies, right? Twins?”

I don’t, but I was impressed that she tried.

The next time we met was at the public school in Solana Beach where Ginn teaches developmentally disabled pre-schoolers. I watched while she sat on the floor in front of three tiny students in three tiny chairs. One at a time, she had her students match a laminated heart to one of the same color hanging on a nearby white-board-on-wheels. The youngest and most enthusiastic of the bunch got so excited by the activity that, on returning to her chair, instead of sitting, she happily threw it in Ginn’s direction.

After Ginn ducked and recovered from the surprise, she gently took the girl by the hand and said in a singsong voice, “Ooops, you dropped your chair. Come pick it up.”

“Sam is her idol,” one of the other teachers said of the little girl. “Every day after school when her mom picks her up, she cries and tries to throw herself out of her car seat to get back to Sam.”

When the girl was seated again, Ginn seamlessly moved into a series of exercises using the Following Directions Fun Deck. One at a time, she helped the children draw a card from the deck and then led the group in following the instructions on the card. Pretend to brush your hair. Pretend to catch rain in your mouth. Pretend you’re playing the drums. Ginn exaggerated every move, laughed loud, and praised the children enthusiastically.

After ten minutes, I was exhausted on her behalf.

“Is she always like this?” I asked Mary, my chaperone.

“Always,” Mary responded. “Sam’s got the energy of ten people.”

By our third meeting, I’m determined to dig deeper and find Ginn’s dark side.

We’re sitting at one of the outside tables at Bourbon Street on a Sunday afternoon. The day’s first run of San Diego, I Love You 2.0, the play she co-wrote as a member of the theater company Circle Circle Dot Dot, is set to begin in an hour. I’m hoping when I lean in to establish a sense of intimacy and say, “I just can’t believe anyone’s that good all the time,” she’ll confess to smoking cigarettes in the bathroom at the school or keying the cars of theater critics.

Instead, she dips her head shyly and says, “Oh, my gosh. Thank you.”

While we talk, the cast and crew of San Diego, I Love You, 2.0 bustle around our table, getting ready for the first of the day’s six shows. The play is a site-specific production that takes its audience on a guide-led tour to neighborhood locations, where they witness the evolution of a relationship. Ginn wrote half of the scenes, some parts of which are based on her parents.

Ginn founded Circle Circle dot dot in 2011 with eight other people. The group now has ten members. Their mission is to create community-based theater using stories and interviews they collect from local community members. One of Ginn’s upcoming projects is to write a play based on people with special needs. She has already begun collecting stories.

For her, this would be a perfect combining of what she calls her “two passions.” Her weekly schedule (up at 7:30, work til 3:30, home briefly, rehearsal by 5:00, home by 11:00 and bed by midnight; and rehearsals, performances, and line memorization on weekends) reflects a comparable amount of time dedicated to both.

Ginn began acting around age 12, when a diagnosis of Osgood Schlatter disease (which affects the knees) diverted her dream of being a professional athlete (because she was ordered not to run for a year) and landed her in a play at Christian Youth Theater in Carlsbad. She continued to audition and perform through her teenage years at La Costa Canyon High School and went on to become a drama major at Sonoma State.

“I’ve been working really hard in this town, and I’ve been rejected [for the well-paid roles] for years,” she says. “That’s something that’s really hard for girls in this town. Sometimes we’ll just get rejected, rejected, and it just takes one role for people to see you.”

A few months later, Moxie cast Ginn in the role of the eternally-stuck-at-17 Cari Lee in Hickorydickory, a character she fell in love with when she read the script.

“When I got to the part where Cari Lee entered a clock shop and she was this honest, hilarious, 17-year-old girl who would talk in a Darth Vader voice and openly talk about her flatulence, I knew it was a part I had to play,” Ginn says. “She was a girl who said what was on her mind. No filter.”

It was the kind of role that allowed Ginn to be as wild and outspoken as she wants to be but rarely is in real life.

At this point in our conversation, Ginn admits that, yes, maybe her...goodness does have its drawbacks.

“I never want to hurt anybody’s feelings. I always want to do the right thing, so sometimes it can drive me crazy,” she says. “The only time I don’t have anxiety is when I’m onstage. It’s gone. I don’t have to worry about a thing. It’s part of the reason I love being onstage: I can be completely free and not a worry in the world.”

The role of Cari Lee also earned Ginn an award from San Diego Theatre Critics Circle. More importantly, today she doesn’t have to fight so hard for opportunities to do the work she loves.

“This past year, I was booked for a year, and that’s my goal, to be constantly working,” she says. “The next show I’m going to be in is Miss Firecracker Contest at New Village Arts. I was thankful that I got cast in that role a year ago.”

This time, the theater came to her.

“That’s the goal,” she says. “Not having to audition is a dream come true.”

In the meantime, she’s also performing in Edgar and Annabel/Far Away at Ion Theatre. These projects, plus the full days she puts in at the preschool, and she ends up with her up-at-the-crack-of-dawn-back-to-bed-at-midnight schedule.

Hoping I’ve achieved enough intimacy between us to warrant some dirty revelations, I return to the question of how she does it and what she does to unwind. Her list includes meditation and walks on the beach, and I stifle a yawn. But she throws me a bone when I ask if she ever just full-on crashes and if so, what does it look like?

“There are days when I do crash,” she says. “That looks like me in a fetal position in my bed — listening to Enya.”

We have a good laugh, and I’m left wondering if it’s the truth or if she’s just being funny. That’s the other thing about Ginn: besides being wholesome and nice and good, she’s funny.

Her mom thinks so, too. Twila Ginn joins us for a chat before her tour guide walks her around University Heights where, for the first time, she’ll get to hear lines from her actual life — “I only leave with the people I came with” — spoken by actors in the play. Ginn’s boyfriend of three years, Evan, also sits with us, and between the three of them, their laughter makes our party rather raucous.

“We did see it coming. We always knew it,” Twila says of her daughter’s life as a professional performer. “She was always very funny and kept us laughing all the time.”

Ginn and her mother reminisce about the performances Little Samantha put on in the garage of their New Jersey home back when she had a bowl cut and looked, in her own words, like a “little manchild.”

“The roller-skating one had lighting and it had costumes, it had special effects,” Twila says. “She sold tickets to all our friends, had them sitting in certain spots, you name it. And at the time, Starlight Express [the 1984 rock musical by Andrew Lloyd Webber] was really popular, so I think some of those songs were involved.”

When Twila begins to praise her daughter for different roles she’s done, covering ground back as far as age 13, when she played an old lady in Bye Bye Birdie, and as recently as last December’s Scrooge in Rouge, Evan points out Samantha’s discomfort.

“Her sensitivity is coming out, I can see it,” Evan says.

He hunches his shoulders, ducks his head, and clasps his hands together. He uses a bashful voice to mimic his girlfriend. “Gah. I’m getting compliments.”

“Well, when I first met Sam, she couldn’t take a compliment. She would freeze or whatever the comparable vocal gesture is. I would be, like, ‘Oh, you look really nice,’ and she’d go” [here he ducks his head, hunches his shoulders], “Gah. Thanks.’”

Earlier in our conversation, before the others joined us, Samantha said, “So, my goal is to create the best work I can but also be the best person I can. But it’s tricky sometimes because...”

And here, she paused. “Well, I don’t want to tell you that.”

I thought, Oh, here comes the big reveal. I got a little bit excited when she went on, even though she asked for it to be off the record.

I assumed she didn’t want me to discuss the fact that she turned down a smaller part to take a bigger part until she said, “So I didn’t go.”

To the callback. She didn’t go to the callback for the bigger part because, for her, it was a matter of integrity.

So, why, at first, did she want it off the record? I asked. Because it sounded too much like bragging about her humility.

And from what I’m now gathering from her people, this was a thought process so very her.

Currently, Evan says Samantha doesn’t know when it’s time to stop working so hard to make others comfortable and to “be cocky sometimes.”

“She’s super-friendly with everyone at auditions,” he says, “even everyone that she’s competing against.”

“I’ve met some of my best friends at auditions,” she says.

He nods in affirmation.

I suggest that she might not make a great reality-show competitor. Aren’t they always saying, “I didn’t come here to make friends”?

“I auditioned for a reality show once,” Ginn says. “Real World. They sat us around in a circle. And the casting director said, ‘I want everyone to go around and tell us your first impression of everyone.’ And everyone right away was talking crap about each other. It came to me, and they were, like, ‘What do you think about everyone?’ I’m, like, ‘Well, I don’t know them, so. . .’”