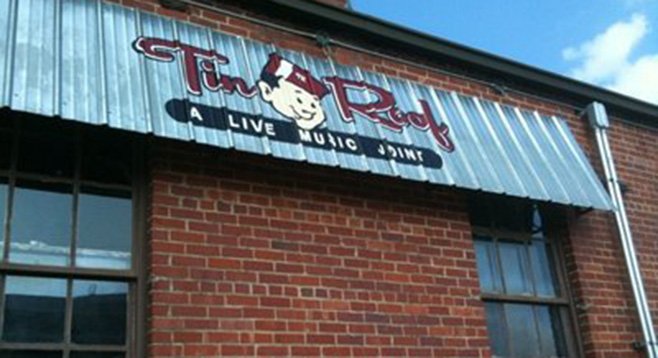 Just as the success of the Moonshine Flats country bar downtown seems to signal a turnaround in the live-music scene, word is that the Gaslamp will get another live venue in late May or June.

Being built in the 11,000- square-foot space on G Street that formerly housed Rock Bottom is the Tin Roof. It will be the first West Coast outlet for the bar/restaurant/nightspot that boasts of its “laid-back feel and live entertainment.”

The local outlet will join Tin Roofs open in Cincinnatti, Charlotte, Indianapolis, Nashville, and six other cities. The chain says two other Tin Roofs will open in Baltimore and Nashville at the same time as San Diego’s.

Known to many patrons as “the Roof,” the first one opened in 1996 in Atlanta. That outlet moved to Nashville and other outlets were added in 2006.

The music/food/bar format reminds some of the House of Blues chain. But that isn’t necessarily a good comparison, says Mike Harris, who will serve as entertainment liaison for the local club. He says the local House of Blues’ 1100-capacity is much larger (Tin Roof will be in the 400–600 range) and that HoB is more of a music venue known primarily for its major-name headliners.

“People don’t necessarily come to the Tin Roof for the act,” says Harris. “They come here for the casual vibe. We’re different than an actual venue. We’ll have TVs and sports.”

But that is not to say major headliners won’t be coming. He notes that Darius Rucker, Blues Traveler, Colbie Callait, and Little Big Town have all played on Tin Roof stages. “Kenny Chesney even came in and played once.”

Harris says San Diego’s Tin Roof will have live music five to seven nights a week, including rock, country, and blues. “We might have an ’80s cover band or have a local indie band. We’ll be all over the map. I’ve heard from my friends that it seems like live music might be catching another wind.”