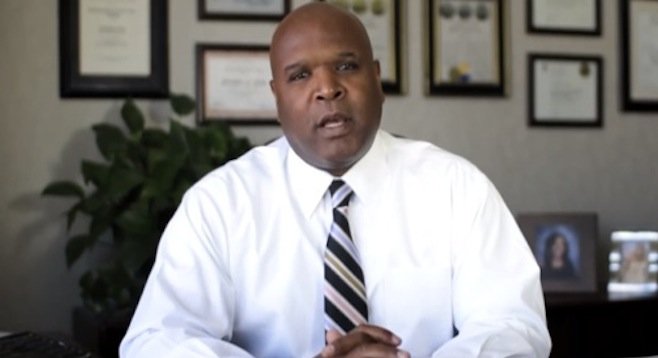 Interviewed in his downtown C Street office Monday afternoon, Gray said he had decided not to accept the appointment because the role could create interest conflicts stemming from his profession as an insurance-industry specialist and broker.

Campaign contribution filings show that since 2011 Gray has given a total of $12,916 to municipal political campaigns and causes, including $4250 to Faulconer's 2014 mayoral committee and $6516 to the GOP Lincoln Club, which masterminded a series of hit-piece assaults against Republican-turned-Democrat Nathan Fletcher and Democrat David Alvarez, credited by many local political experts as a key factor in Faulconer's victory earlier this year.

Gray is a past leader of the group's membership committee.

In his March 14 memo announcing Gray’s appointment, the mayor wrote: "It is my pleasure to appoint Mr. Douglas E. Gray to the Civil Service Commission. Mr. Gray has successfully founded and run several businesses in San Diego specializing in the insurance arena. He has been consistently recognized for his integrity, intellect, and ability to deliver results.

"Mr. Gray has been active in the community for many years and sits on multiple boards in a volunteer capacity.

"I look forward to working with Mr. Gray and am confident he will bring common sense leadership to the Civil Service Commission."

"Member of the Week"

According to a video posted online by the Lincoln Club, Gray is president of a firm called Q & A Insurance Compliance Specialist, which he says "provides insurance compliance verification services" for "municipalities, utilities, and school districts throughout the state of California."

A client list posted on Gray's company website includes Sempra, Southern California Edison, Culver City, and Turner Construction, which has been a major seeker of city work. In addition to that employment, Gray said he also sells data-breach policies through a separate firm.

"The reason that I joined the Lincoln Club was it gives me an ability to get off the sidelines, and to get actively involved in the political, economic, and business issues that face our region," Gray says on the video. "As chairman of the membership committee, I urge you to consider joining and helping being part of that voice."

State insurance licensing records posted online show that regulators revoked Gray’s sales license in 1990. A February 2004 entry says, "Conditions and restrictions on respondent's licenses and licensing rights are hereby removed." Gray said that he could not remember details of the actions because they occurred years ago.

We have a call into the mayor's office for more details of Gray's withdrawal and his replacement appointee.