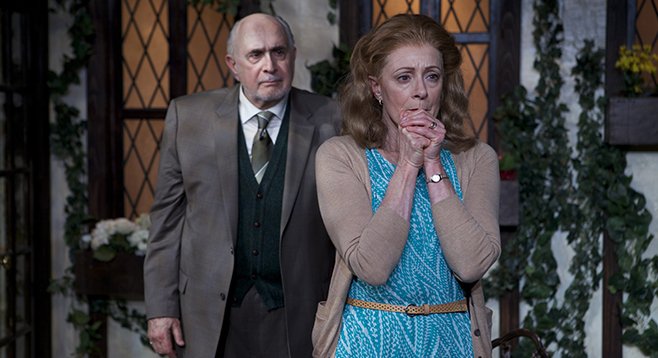 Lionel Goldstein’s world-premiere drama has some creaky dramaturgy and overuses a trick so much that, in the first 30 or so minutes, it was tempting to phase out and do character studies of various spectators.

Eighty-year-old man, thick foreign accent, comes to Jane Stirling’s home in Berkshire, England. He marvels at the interior, and marvels and marvels. He’s never been to Britain, he says, but somehow knows her — how, not clear — and has brought something important but won’t say what it is.

After a year, in audience-time, and much fussy traipsing around Marty Burnett’s beautifully detailed set, we learn he’s Gustsav Frolich, a Viennese Jew who spent three years in Bergen-Belsen, the Nazi concentration camp in Northern Germany. He also reveals, after more traipsing, he knew Jane’s birth father during World War II. 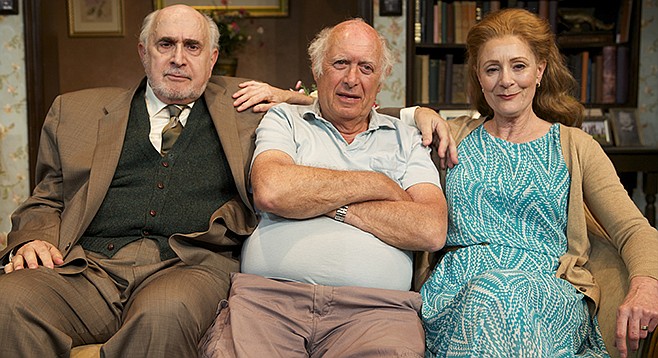 As Gustav “bears witness” to the Holocaust — a story that can never be told enough — he talks of British men that might have been Jane’s father. This one? “No.” That one? “No.” Him? “No,” again.

The persistent stall tactics kill whatever dramatic or comic effect these devices might have had. The overriding impression: our author is toying with us Big Time.

Then the drama wakes up. Connections surface, a surprising number, in fact, and put human faces on a rarely told story: the British Palestine Mandate (begun in 1922, the League of Nations had England “administer to non-self-governing” Palestine and Jordan) and the birth of the Nation of Israel in 1948.

Though his surname means “cheerful” in German, Gustav’s wracked with “survivor guilt” (as the sole member of his family to escape the Holocaust). He committed an unthinkable act. Neither the pressures of the times, nor the forces of history, can justify a crime too grave to beg for forgiveness.

Settled, quiet Jane’s contemplating a change. After 38 years she will remodel part of the house. Gustav's life-changing news alters her sense of the truth.

Rosina Reynolds and Apollo Dukakis are a finely-matched pair as Jane and Gustav. Jane’s no “Guardian-reading, BBC-listening” Israel-basher. In fact she’s much more informed than she first appears. Reynolds deftly changes our initial impression; Jane’s intelligence blooms like the flowers in her sheltered garden. As do her emotions.

Dukakis probably does as well as one can trying to make the first 30-ish minutes not sound like a formal lecture (but the writing does). And when the time comes, he delivers ultimate revelations with deeply felt conviction.

Though Matt Novotny’s lighting shades toward the darkish, Alina Bokovikova’s costumes reveal character in a telling way: the clothing’s out of date; Jane’s maybe 30 years; Gustav’s, 60.