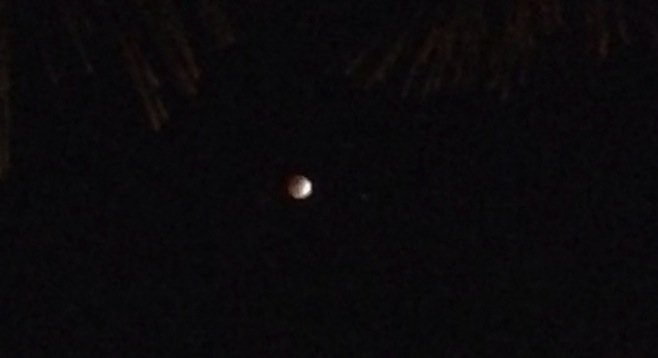 Final verdict on blood moon? Whatever.

Note: you can’t take a good picture of the moon with your iPhone.

I watched April 15’s much-hyped “blood moon” in two phases. I don’t understand the science behind the blood moon but the entire internet said that it was something that happened rarely. I was determined to stay up and see it. I am tired of seeing pictures in the morning of the beautiful things that happened while I was asleep.

At around 8:00 p.m., I told the husband we would be watching a lunar eclipse. I even hyped it up, spitting out weird science that probably didn’t make any sense, but he was tired and only half listening, so he nodded with his hand up — a sign to shush because he and the television were having a moment. He was asleep on the couch by 10.

At around 10:52, I poked him and said, “Wake up — we have to go see the moon.” I think he forgot what he agreed to, and he stared at me blankly, lumbered around, put some shoes on, and oafed his way out the door behind me. He was pretty annoyed once he realized we weren’t just going to watch it from the front of our apartment building but instead walk to the park three blocks away and watch it from an open field.

Husband grumbled and moaned the entire walk to the park entrance, peaking before the eclipse did with, “This is stupid.” At that point, I more or less threw the keys at him and uninvited him from my moon party. He apologized, blamed his petulance on constipation, and stayed.

I sat at the base of a tree, head tilted toward the sky, willing my iPhone to take a picture that would make people regret sleeping through “blood moon” after I posted it on Facebook the next day. (Note: you can’t take a good picture of the moon with your iPhone.)

Husband stood next to me, knees level with my head, his face aglow with the light from his phone. There were a surprising number of people in the park, too. Only one other couple was there looking at the moon, and they looked like they had prepared for a sleepover party at Balboa Park, because they were in PJs, slippers, and wrapped in those quilts that are supposed to look like a grandma made them but are really the work of some poorly paid child in Bangladesh.

It was weird being in the park at that hour because I saw so many people doing other things unrelated to trying to watch an eclipse. There were couples walking around, dogs being played with, people doing solo runs, and kids who probably should have been at home but were instead at the park kicking a ball around.

Anyway, the Husband and I lasted about ten minutes during blood moon: Phase I. His boredom or anger or disinterest or maybe even built-up poop pain was palpable. Between his anger/boredom/IBS and my basic disappointment with how long an eclipse seemed to take, we headed back to the house. Husband took off his pants and headed to bed, telling me to wake him up when I was going back because I was going back. I sat on the couch and read while fighting the urge to cave in to my adult worries about waking up for work.

Sitting on that couch, I was pretty sure that the stupid moon would probably be entirely anticlimactic and that I would look up at it in awe while wondering why the fuck I thought it would be so interesting. BUT, I wanted the opportunity to be disappointed. The ability to feel disappointment is the ability to experience something. Sure, it stems from a hope or a dream being stomped on or rended in two, but still, at least tomorrow I would know that the blood moon was not worth staying up for until 1:00 a.m. Even if the blood moon was the most boring event to have ever been viewed, I would still tell everyone on Facebook that it was amazing and chastise them for not being so in love with the world around them that they chose sleep instead of the opportunity to watch the Earth pass over the moon.

At about 11:55, I went back outside. I didn’t bother to wake up Husband. I walked back to the park and noticed a cop car parked outside the entrance. I thought, Shit, they do enforce those stupid nighttime park rules. But, as I walked closer to the cop car, I noticed a lot of people were walking toward the park and the cop wasn’t saying a word to anyone.

I walked back to the spot where Husband and I had sat earlier and was surprised to see a large group of people scattered throughout the area — some with telescopes set up, some with blankets thrown around on the grass, a few with cameras sitting atop tripods. People on bikes, people holding hands, groups of guys with brown paper bags in the shape of beer cans in their hand. Being relatively new to San Diego, I have gotten used to doing a lot of things alone, just from lack of knowing anyone out here. It’s funny that I went to watch Blood Moon: Phase 2 alone and I actually felt incredibly UN-alone.

People offered drinks from backpacks, snacks from Ziploc bags, extra blankets. They chatted about our cool neighborhood. For having done less research than I normally would have done, I did really well on the whole neighborhood-choosing thing. Golden Hill has quickly made itself precious to me.

At some point, I realized I was there to see an eclipse and looked up at the sky. The moon was almost completely blotted out, and the blackness was slowly creeping across its face. I wouldn’t so much call it blood-colored, but the hue that rested on the part of the moon that had yet to fade to black was more of a rusty color. I think I saw Mars, too, or at least I noted that the brightly shining dot to the upper right of the moon was Mars. I could be wrong, but if I repeat this story, I will firmly declare that it was Mars.

Final verdict on blood moon? Whatever. However, I am glad I stayed up to watch it. I guess if I was more into science, the viewing would have appealed to me more. I kind of like it better when the moon is full and bright and so big that it looks like it is crashing to Earth and Will Smith is going to have to save us. An eclipse is sort of depressing, if I think about it too much and think about it in a metaphorical sense instead of a literal one. I guess this is why I am not a scientist.

As one of the dudes you saw brown-bagging a tall can of carrot juice, I can attest to the fact that, while spectacular in its own right, the event hardly lived up to its name. I was more blown away by the sheer number of blood moon puns my friends could come up with to keep us laughing throughout the long process. Also, had zero success trying to capture an image on my Canon T3i with kit lens and no tripod. Alas.

I would not have guessed carrot juice. Also, I feel better now about my crappy iPhone pics. And this event was overhyped. Agreed haha if you want to share the puns, it is appreciated

Yes, that was Mars. It was beautiful.