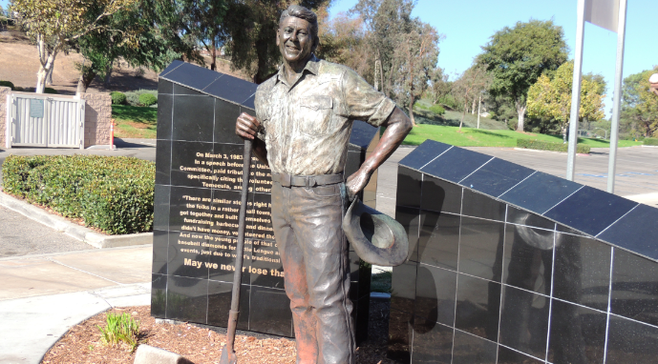 Citizens from around the nation have so far donated $5000 to repair Temecula’s Ronald Reagan statue, which was discovered charred by flames at the Ronald Reagan Sports Park on September 20.

Fire officials and the sheriff’s department are still investigating the case, according to CalFire.

“Obviously, it was the objective of the arsonist to do some harm to the statue,” said Perry Peters, who oversees the nonprofit that raised funds for the nearly $100,000 bronze-plated statue. The damage also melted off the adhesive to about 24 tiles on a nearby monument, which has since been repaired.

The monument is inscribed with parts of a speech Reagan gave to the U.S. Olympic Committee in 1983. During that speech, he mentioned “the rather small town Temecula” and praised the people for building their sports park without government assistance before the town became a city. The park was later renamed after Ronald Reagan in 2004.

The damage discolored the statue, and the cost to restore it by sandblasting is about $4000, according to Peters. But by September 25, the nonprofit Friends of Ronald Reagan Sports Park had already received about $1000 in excess of that cost.

“[Donations] have come from all over the country, about 15 to 20 different states, including Alaska,” Peters said. The additional money received will help fund a security system.

On September 25, Karen Nilsson and her father drove to the park to see the statue after they heard it had been burned. “I’m just sad. I don’t want to see Temecula become a place of tagging or arson,” Nilsson said.

The now–black and burnt-orange colored sculpture used to have a yellow work shirt and denim-colored jeans.

“He’s gone from the blue colors to the sepia look,” Nilsson said.

The president’s sculpture is one of two phases of statuary slated for the park, Peters said: completed plans include a family of four depicted building the park, which will symbolize the efforts of donors and volunteers who helped build it.

“We have a lot of spirit here,” Peters said, and added that the burning of Reagan’s statue “is an insult to all the nonprofits here.”

CalFire asks anyone with information about the incident to call their arson hotline at 800-633-2836.

The arsonist might have improved the statue, which sounds dreadful as described. The pigeons express my opinion of statues of "great" men, and Ronald Reagan.

That hat might be a great place for birdseed.