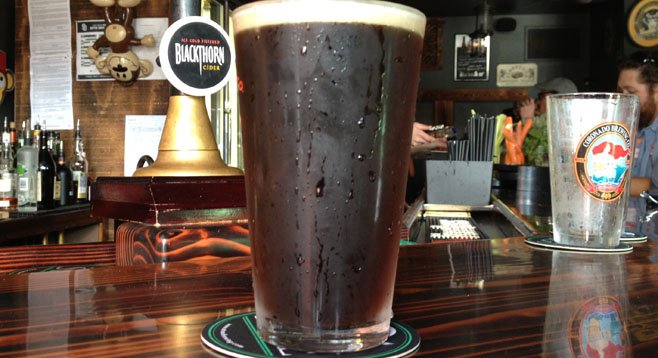 Even as a devout Christian, there’s something very intriguing about a beer that labels itself as “satanic.” Especially when said devil’s brew is served up in dark, cavernous lair juxtaposed almost ironically by stain glass windows touting beer like a false idol. It’s all in fun, of course, so there’s no need for any Catholic guilt when giving in to Monkey Paw Satanic Chimp.

This red ale is currently on-tap at Monkey Paw Pub & Brewery (805 16th Street, East Village), the previously described craft beer church-slash-dungeon, and though it sounds like the type of beer that would have tons of bite and attitude to spare, it’s one of the brewpub’s mellowest, least imposing beers to-date.

In San Diego, the words “red ale” conjure expectations of pronounced piney hops against a malt bill ranging from caramely to dry and burnt. That’s because the majority of local red ales—Green Flash Hop Head Red, Port Shark Attack, Manzanita Rustic Horizon Red—veer the imperial route, going with big alcohol and oodles of hops. Trying to balance out all those Alpha acids leads to an extreme malt profile.

Satanic Chimp is a different story altogether. The hops come across like a stifled cough on a Sunday service, letting the malts take the front pew. Instead of caramel, the beer is chocolaty, yet light-bodied enough to be drinkable and thirst-quenching. And, at six percent alcohol-by-volume, several can be enjoyed in the same session. Just maybe stop at two if that whole six-six-six thing is an issue for you.

Good to have a Stout-looking and Devil-named beer weigh in at 6% and be mellow. Makes me wonder if we could get commoners to drink more stout and ale if we mellowed them some. But then, we do drink beer for its flavor, right? Dr. John Kitchin, Brewmaster (retired)