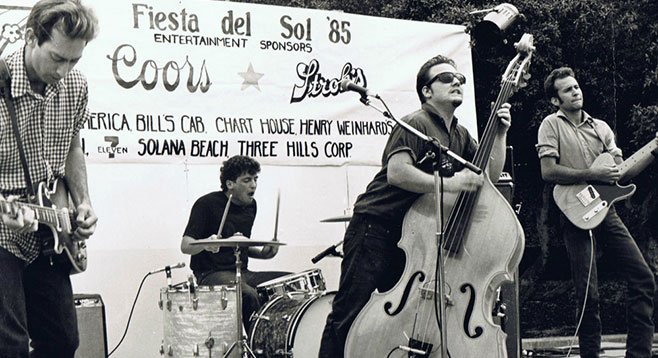 “I go by the stage name Jackslacks, taken from the 1957 Sparkletones hit ‘Black Slacks,’” says rockabilly drummer/singer Chris Giorgio, whose newest music offers a slightly jazzy take on the early ’80s sound he pioneered with roots rockers Forbidden Pigs, fronted by Billy Bacon. Playing Tex-Mex covers and originals, “Billy and Pete [Conway, guitarist] had only recently graduated from St. Augustine High School in North Park. I myself [was] a recent transplant from Long Island and sporting my new Pig stage moniker Long Island Link. Just a three-piece outfit, featuring an old American Telecaster guitar, Kay upright bass, and vintage Ludwig drum kit.... Our monthly fanzine newsletter was appropriately titled ‘Slop,’ which humorously lent itself to both our band name and some of our earliest performances.”

Forbidden Pigs were signed, split, reunited, and still occasionally play, long after Giorgio moved on to co-found Hot Rod Lincoln and later launch a solo career with his 2002 rockabilly album Rock & Roll Dinosaur, produced by Stray Cat Lee Rocker and featuring Billy Bacon. Giorgio still embraces his Forbidden roots on the new Jackslacks EP Farm Jazz, just released on the indie label Shield of Love and including the track “Don’t Mind Me.” “That song was actually co-written with my ex-Pig mate Billy Bacon, who unfortunately suffers from rheumatoid arthritis and is unable to gig much anymore,” says Giorgio. “It was cool to work with him again after so many years.”

Roots music is a basic, straight-ahead form of rock and roll that combines elements from many different original American genres. “It was late 1984,” Giorgio recalls, “when the influential and essential San Diego roots music scene started to take off at Bodies...the Bacchanal in Kearny Mesa. On any given night, you could catch up-and-coming local acts like the Beat Farmers, the Paladins, Mojo Nixon and Skip Roper, Outriders, and Forbidden Pigs.

“Black leather jackets, pointed-toe shoes, and greased up pompadours were suddenly back in style. It was loud, crude, messy, and one hell of a good time.”

One of my favorite roots rock bands!