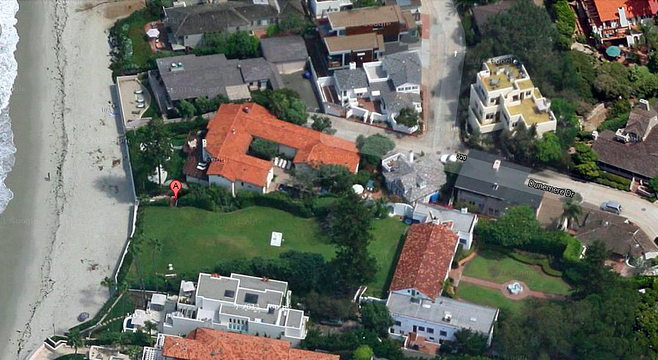 An appeal before the California Coastal Commission meeting on September 11 in Eureka against the planned larger home by Mitt and Ann Romney has been postponed. Architect and longtime La Jolla resident Anthony A. Ciani filed his original appeal on July 24, claiming the proposed “McMansion” on the Romneys' .41-acre beachfront lot is illegal under city and state laws and coastal usage policies.

The couple's goal is to demolish their 3009-square-foot house at 311 Dunemere Drive and replace it with an 11,062-square-foot home. Ciani told the Reader that “Romney postponed, not me, which only gives me more time to build my case.” He added that it's not personal. “This is not about Romney; it's about what's right. The issues rule, and I hope Romney's prominence will spotlight the importance of these issues.”

The La Jolla Community Planning Association previously voted to approve the Romney house project. But, Ciani says, “the Romneys claim they own the beach out to the mean high tide line and are using that area to enhance the size of their proposed new house.” Ciani argues that the La Jolla Land Use Plan shows the beach to be “dedicated” or “owned in fee by the City.”

Alexander Llerandi, a program analyst with the California Coastal Commission, told the Reader in an email that “at this time the item has not been formally scheduled for another hearing.” But Ciani said he expects Romney's team to “pack the room with supporters” at the October meeting in San Diego at the Crowne Plaza hotel.

Jill Esterbrooks, spokesperson for District 1 city councilmember Sherri Lightner, who represents La Jolla, said by phone that Lightner “will let the process work its way through.” The Romneys are represented by San Diego attorney and registered lobbyist Matthew Peterson, who specializes in real estate matters. Peterson did not immediately respond to a request for comment.

David: Interesting story. Are you going to attend the October meeting, so others don't have to? Why would a couple with adult progeny need more than a 3k square foot home? I mean, hey, they've got the ocean and a good sized house. One would think it a proper size for the area and use.

I do plan to attend the October hearing. For the rich and famous it's isn't about what they "need" but rather what they desire. It's an ego thing, and about displaying their wealth to others. And they do what's necessary to circumvent laws and rules that the rest of us have to follow.

Dwb: I look forward to your report.

I didn't do one, as it got such major media coverage elsewhere.

I only have one comment on Romney. Leave. Leave San Diego you jerk. We don't want you here. We don't want your selfish politics leaking into our lives. You lost the election and the 47% want you to leave. You are unwelcome and we will smile, but always hate you. Go back to Utah. Take your magic underwear and your freakish cult religion with you. Romney, you are not welcome here. GO AWAY.

Wow, how do you REALLY feel?

I think I'd rather live next door to the Romneys than to Ponzi. What an outburst! Seems like the kind of guy who might use a hand grenade to settle a neighbor dispute.

Anybody else tired of people identifying themselves by percentages. "I'm the 99%," We 47%." May as well say, "We the self-branded sheep of America."

By the way, if you are the 47%, you want guys like Romney around. Because he's part of the 5% that pay 85% of the taxes that buy the government freebies you 47% love so much..

As CNNMoney reported, "Romney paid 14% effective tax rate in 2011." I believe it was reported that Mitt's secretary paid a much higher rate. The Reader's Dorian Hargrove previously reported that Romney paid several $thousands to lobbyists/attorneys to push his house project through city approval. Romney will be paying more as he defends his point of view [or his new house cutting off the view!] before the California Coastal Commission.

The 47% was from an infamous remark by Romney. So it is okay to identify everyone else by percentages? That doesn't tire you out?

Dwbat: Thanks for the fact check. When I mentioned the 14% to a friend who, like the secretary, pays more, and asked if he were going to figure out how to pay less, he merely stated, "Well, gotta pay for services somehow." Now there's a civilized attitude.

Romney's people appear to be going off a standard version of "riparian rights" as generally recognized in real estate law. However, if the City's laws are more stringent than generally applied as concerns beach frontage, that could be one argument against expansion. Even the general principle has a "reasonableness of use" clause, which can be fairly broadly interpreted...it'll be interesting to see how this plays out, to say the least.

Yes, it will be quite a battle. Ciani also intends to raise other legal issues in October at the hearing.

Ciani informed me today that he has written to City Attorney Jan Goldsmith, Interim Mayor Todd Gloria and City Council President Pro Tem Lightner, asking for an investigation into who actually owns the beach area outside Romney's home. The Coastal Commission staff is apparently relying on City information that is incorrect about that ownership, Ciana says. His letter said in part: "I am not opposed to development on the waterfront, but I believe every one deserves equal treatment under the law, and it appears that this is an illegal taking of the public's land for private purposes, without just compensation, without proper permits and/or other legal administrative and legal actions."

I forgot to mention there will be live streaming of the meeting. Go to: www.coastal.ca.gov/ at 8:30 on the 11th.

LATE UPDATE: The CA Coastal Comm. just voted 7 to 4 this morning, to approve the Romney project.

Looks like the CA Coastal Commission is caving right, left and down the middle.

Anyone see the article about the 35 year old member of the commission who said he had attended many Comic-Cons--looks like they just ignored all the issues with the expanded convention center. While I am tempted to say, "What a bunch of idiots!", I am sure the story is larger than that.

From their two San Diego recent decisions, the Coastal Commission seems to be acting much like the CA Public Utility Commission: serving the rich and power elite instead of the people and the public interest.

DW: perhaps now would be a good time to ask the Governor to review his appointments thereto. Thanks for this reminder, I will send in my email....you never can tell.

I was surprised when the Coastal Commission staff recommendation (denying the convention center expansion) was overruled. Something sounds a little fishy, just like with the Romney decision. A house cleaning at that Commission and the CA PUC is needed.

It doesn't matter now how non-residents think. The Romneys now get to tear down their old "shack" and build a new mansion next year.

LATEST UPDATE: Romney attorney Matthew Peterson emailed that he had a 45-minute phone conversation with Ciani. Peterson said they "were able to work thru many issues." He added: "I assured him that we will not include the word 'passive' in the dedication and that alleviated his concern re public access." Peterson also mentioned "the potential to increase lifeguard presence at the beach. Mr. Ciani thought that was a great idea."

DW: it sounds interesting. No doubt Mr. Ciani would want those assurances committed to paper, and flesh out what "potential to increase" means:)

Construction is not expected to start until Spring, so there's time for any such agreements to be put in writing. I think the lawyer's reaching out to Ciani was tactful, and could be useful in future situations in La Jolla.