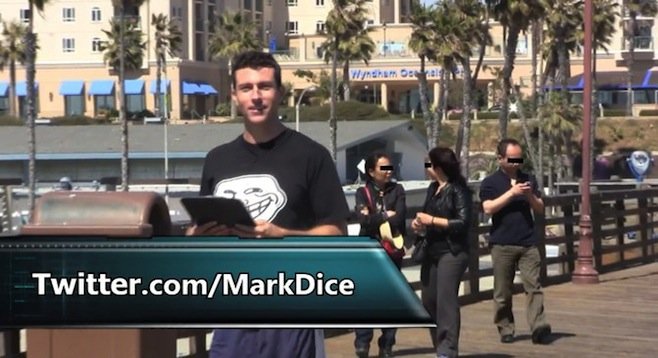 One has to admire someone with a set of cast iron balls. Local video satirist Mark Dice can use his to chime the hour.

It’s a sunny day in San Diego (duh) and you decide to take a midday stroll along the Oceanside Pier. A well-groomed man in his mid-30s walks up with clipboard in hand requesting that you sign a petition asking “the City Council to increase the Orwellian police state.”

It’s not a trick question, like, “When a plane crashes over the ocean where do you bury the survivors?” In case you didn’t get the gag the first time around, the gent reiterates, “We want to model it after the Nazi Germany–style police state just to keep everybody safe.” 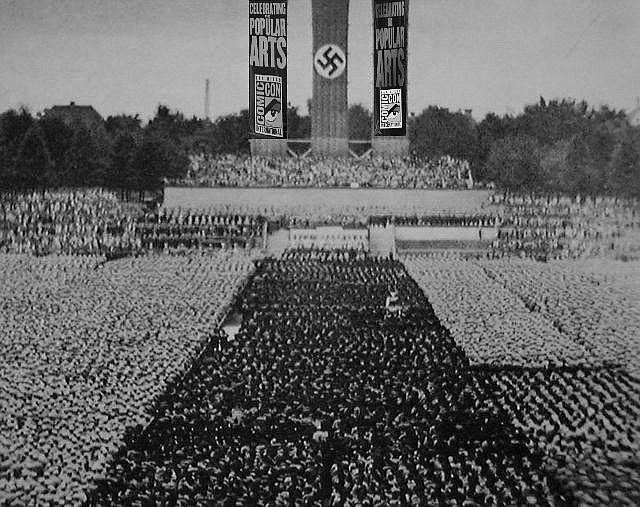 Today Oceanside, tomorrow Comic Con! We must not allow this to happen!

I can understand not getting the reference to George Orwell. Many of those interviewed look like they quit reading for life after a high school English teacher forced them to plow through Animal Farm. But Nazi? Who doesn’t know from Nazis?

After one guy gladly scrawls his name above the line, Dice turns to the camera and in astonishment asks, “Am I not making myself clear?”

In defense of those who actually signed the petition — and there were many — it was a sunny day and maybe they thought Dice was inquiring if it was so bright that they could not see.

WTF kind of sun-baked idiots live among us? A friend observed that many of the people interviewed in Oceanside looked to be touristy types. If that’s the case, and this is what’s vacationing in San Diego, I suggest we close our borders yesterday!

So far we have terrible mistakes without thinking, soon it could be tragic.

Perhaps this is the level of disconnect The Sweetwater Crew of Thieves (Brand, Cartmill, McCann and Ricasa) are counting on. Wouldn't it be great to prove them wrong?

easrlaker - similarity in Sweetwater, City and Feds, I'd say.

eastlaker - It will be great to prove them wrong, especially after another school board meeting last night denying the public and the teacher's rights to input, creating an atmosphere exclusive to fairness, again.

I think I just signed up to be a Jehovah’s Witness. Dafuq, you only live once.