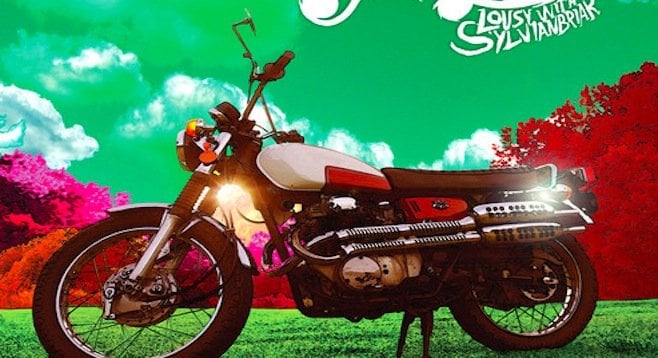 Lousy With Sylvianbriar, by of Montreal

Two decades and 12 albums later, of Montreal mastermind Kevin Barnes has decided to throw back to the band’s earliest sounds. Lousy With Sylvianbriar steps back from the synth-soaked songs of Paralytic Stalks and Hissing Fauna to deliver a solid folk-rock album.

From the band that gave us “Wraith Pinned to the Mist and Other Games” (Google it), “Fugitive Air” opens the album and right away you know you are in for a change. Barnes always had a bit of a David Bowie bent, but here he delivers a Ziggy Stardust-meets-Gram Parsons sound, a strange alt-country that is present throughout the collection.

“Obsidian Currents” is Barnes in full-fledged Bowie voice, and it’s as sultry and entrancing as ever. The Bob Dylan influences on “Belle Glade Missionaries” may be a little too spot on; it can come off as a bit trite, but after a few listens you can appreciate the attempt to grasp that mid-‘60s Dylan vibe in a modern way. “Amphibian Days” plays along with the back-to-basics motif of the album, complete with steel guitar and Flying Burrito Brother harmonies.

The album ends as brash as it began with “Imbecile Rages.” I think Barnes wants to nail it into his fan base that he can reinvent himself with each record while keeping constant of Montreal's select indie-rock sound. At this point in his artistic life, Barnes deserves to produce whatever he wants — thankfully, Sylvianbriar is a standout piece of work in the band's canon.