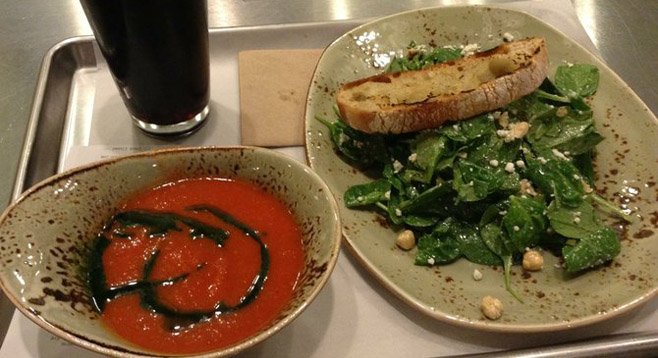 Green surprise at the Greyhound

Trotting down Broadway around nine at night, heading to the brick hotel where the Greyhound Depot used to be, at First Avenue. Used to be a pretty shabby corner, too. But recently I'd seen signs saying the corner space was up for grabs. 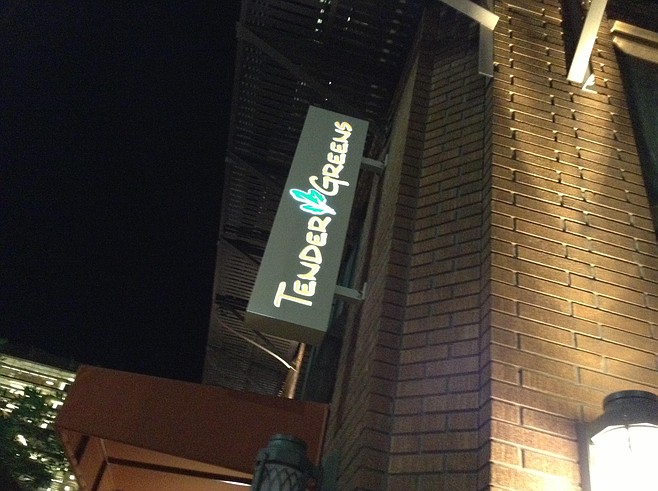 Happens I'm hungry, so have to stop. "Tender Greens," it says.

"We've been open three months," says the cashier gal Giulia. "With a 'G,'" she says. "Italian. We're also at Liberty Station and UTC."

And, turns out, in Orange County and LA and the Bay Area.

Guess I'm the only one who didn't know. So it's a California chain. But I forgive them because you can see they're into making healthy stuff without going over the top, like it ain't good unless it tastes totally bland.

Got to hurry because they're closing in five minutes. What I like about the menu is it's divided into clearly-priced sections. Like, Big Salads ($11), Hot Stuff ($11), Simple Salads ($6), and Comfort Soups ($4). 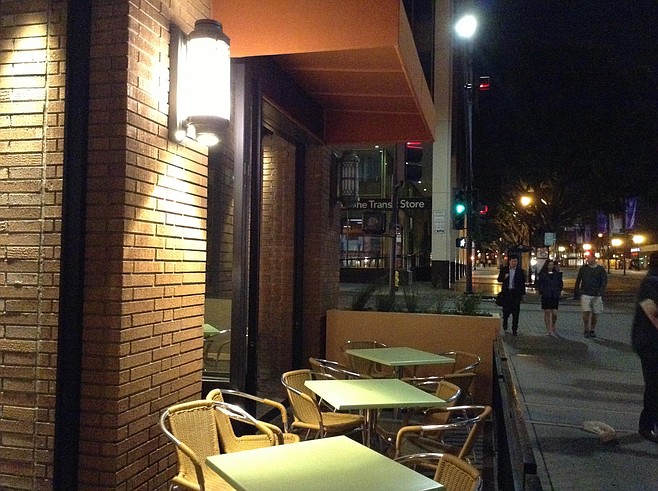 The Hot Stuff goes from steak to chipotle barbecue chicken to albacore to grilled and roasted veggies.

D'aaah...moment of decision... okay. Ask for the $6 baby spinach salad (because it has goat cheese and, wow, hazelnuts), and the roasted roma tomato soup, and what thu heck, I see they have Stone Smoked Porter on draft for $6. That too. Total comes to more than I meant to spend, $17.28.

But, have to say, it's worth it. This guy Sadi rings me up and brings over my tray lickety-split. And for starters, what beautiful plates and bowls. Total ceramic art in themselves. The tomato soup is great, Tuscany-style, I'd say, with basil, for sure, plus a swirl of dark winey vinaigrette. And you get a chunk of garlicky toasted and oiled baguette to dunk in it.

But have to say, the salad and those hazelnuts are totally delish, and you know it's doing you a ton of good.

So is the Stone Porter. A least a feller sure starts to feel good.

And what I like: Giulia says if you're low on funds, it's cool to come in and order any of the Hot Stuff meats without any sides, like the steak or the albacore, and just pay five bucks. "That gets you your protein," she says. "Or a plate of veggies for $5, or a plate of mash for $3." 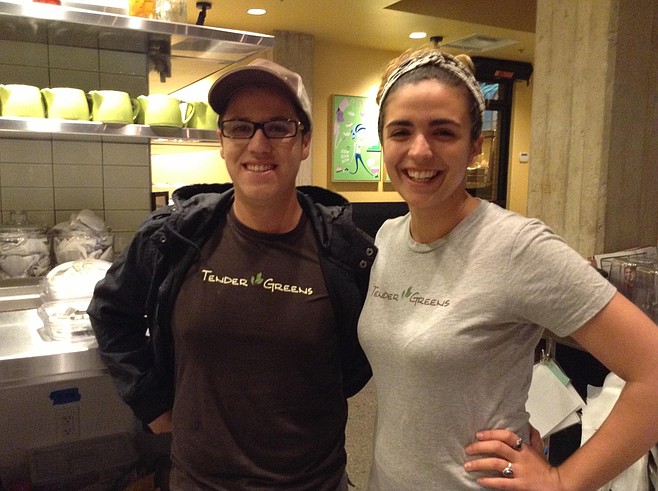 And no, they won't give you a hard time, just ordering one item.

Seems these guys are really next-generation greenies. No big deal, but they sound serious about Farm-to-Fork. They get veggies from like Suzie's Farm in IB, and other organics. they swear their albacore is caught wild, and "sustainably managed." I'll trust them on that. Their chicken is all free-range, beef is "open prairie, no hormones or antibiotics," and they're into local beer. You've got to hope they mean it.

They do vegan too, of course.

So okay, this li'l supper's been a little rushed. But overall, great surprise. From shabby corner to bright green café.

Wow. Has the future arrived already?