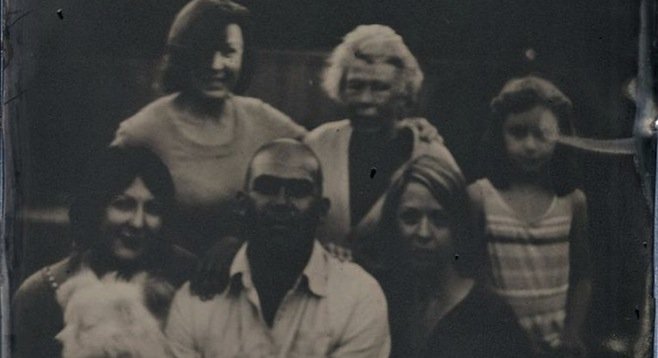 At first glance, the colorless photos don’t appear to be anything out of the ordinary.

Weathered and faded around the edges, the collection looks like something you might find in an unmarked shoebox at the end of an estate sale.

But as you flip through the images, you realize that this isn’t your average family photo album.

In fact, each portrait depicts a different family, and – even more puzzling – each portrait includes the same bald man sitting stoically among the parents, children, aunts, and house pets. 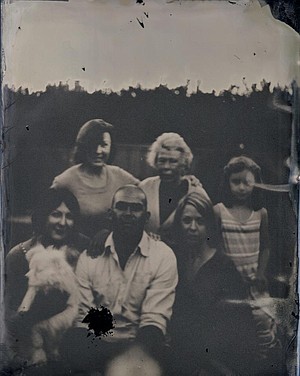 “If I’d posed with friends and people I already knew, it would’ve been too comfortable and there wouldn’t have been any pressure or fear of failing; had something gone wrong, everyone would understand and we could just reschedule,” says photographer Omar Lopez, who will be showing his RELÁMPAGO series on Friday, October 4 at Mariposa (Chapo Márquez 158, Colonia Federal, Tijuana) from 4 to 10 p.m.

“The excitement of working with people I’d never met before and making these fantastic scenarios with them was a tremendous fuel.”

Lopez created the series of pretend family portraits using tintypes, a 160-year-old process that produces images on a thin sheet of iron.

Exposure times for Lopez’s 25 tintypes varied from 2 to 20 seconds.

“Stuck frozen in these fabricated moments I would look around and catch myself thinking for a second, ‘what if this was my family?’ Given the nature of the project and the amount of effort and energy on the part of me and every stranger to precisely pretend to be a family for a portrait – the question/thought is unavoidable. Then the situation is heightened by having to stand still together for an abnormal amount of time for a picture. I never asked directly. I left it to mystery. But I imagine everyone who worked with me – for however very briefly – also had the same thought.”

As RELÁMPAGO hinges on a fictitious photo-narrative, Lopez implores the distinction between “fantasy” and “pretend.”

“Fantasy implies a desire a longing, a wish – it has a focus, a distinct aim; Pretending is rooted in the act itself. The heart of this project lies in Pretend’s open-endedness – exploration without obligation or commitment. For me, Pretending does a loop and reinforces everything else that is Real. I wonder if it did the same for everyone else I met.”

“Then, when I had the process down, I still had the problem of, well, what the hell am I going to do with it?” Lopez recalls.

“I batted around a lot of ideas over a lot of coffee with my friend, artist Alberto Caro. I didn’t want to just do a big portrait project. Though collodion produces such a gorgeous look and feel, I feel like there are lots of other very talented people out there who can create portraits, straight portraiture, much better than me. My strengths and what I have to contribute are something else. I started taking stock of everything I had available to work with, it occurred to me that my motorcycle was one of my biggest tools. It sparked a lot of conversation with strangers wherever I went. Ah... people, strangers, another big passion of mine. Alberto joked about me posing in a portrait with the family that was sitting next to us so that people would look at the picture and think, ‘who the hell is this ugly beast posing with these decent people?’ Little by little, things clicked until I arrived at the entire idea for RELÁMPAGO. I created something that involves a collection of my passions, from the materials I had available.”

Not at all fazed by his recent introduction to tintypes, Lopez embraces photography through the eyes of a first-timer.

“I collect old photos of strangers. Even more than the image quality or the smell of the paper or the mysteries in the story of the pictures, my favorite quality is their beautiful amateurism. Amateurism is their strength. They have a palpable intent. Things might be too dark or too bright or close or smack in the middle and there’s no rule of thirds and sometimes things are too far away or people are chopped off or at a bad angle and you have to put the image close to your eyes and look for things. Not being professionals with an audience to produce for, the people who made these pictures were trying to capture something for themselves. Beauty comes when you recognize and appreciate that your role will always be to experience these photos as a mystery and that the true and complete meaning of the photo will always and only belong only to these lost people. This is the unschooled earnestness I found myself recreating. Strangely working backwards, naturally composing things by habit and then uncomposing them – placing subjects directly in the center or far away, slightly crooked – always aware of how easy it would be to produce a trite image, something fabricated too perfectly, like neatly pre-torn jeans.”

Making use of the qualities and inherent imperfections of tintype imagery, Lopez exposes the distance between his self in the photo and his self in reality.

“I combined this with a staged unimportance – both in composition and image size – to create the desired effect of believability. I shot in 4x5 instead of a larger format because – though I can’t deny that shooting in a larger format would’ve been costlier and a bigger burden to haul around – a bigger picture just would’ve ruined the believability of the image. A large format tintype is just too stunning. It would’ve focused too much attention on the image as an object itself instead of the intended story in it. To work, the images had to be something, but just as important, they had to be nothing – they had to be something you could throw away.”

This object-lesson in disposability and innovation is underscored by one of spontaneity, trust, and artistic accountability.

“Tintypes are so elemental, basic, & instant, that they really communicate magic to people,” Lopez continues.

“After all the work for RELÁMPAGO, they are still magic to me. When people see firsthand, right on the spot, the vulnerability and chance involved in creating every single plate, I feel like it puts us on equal footing. I’m asking people who don’t know me at all to be a little weird with me and to give me their trust, so my relying on this alchemical process and having to perform on the spot makes me accountable to them, vulnerable, and makes me really feel the pressure of not only having to deliver, but to sometimes accept mistakes and to do it in front of an audience.”

If the medium is, indeed, the message (or at least a significant part of it), than the direction of RELÁMPAGO couldn’t be any more in accord with tintype’s legacy. 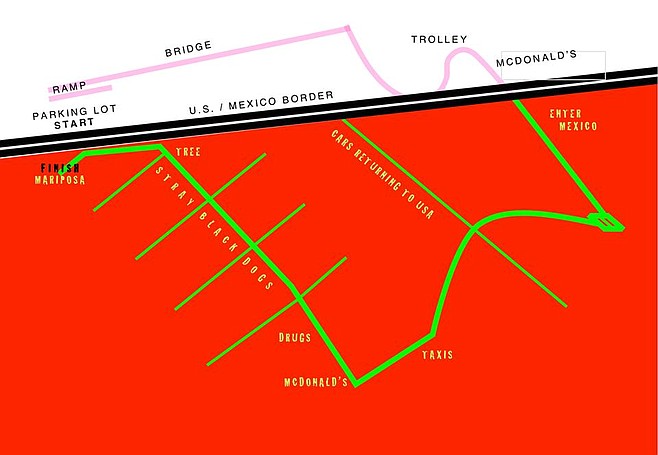 “Wet-plate fotography carries a tradition of mobility, adventure, exploration, engagement. In horse-drawn caravans or with giant backpacks, wet-plate fotographers set off to document the Civil War, the Crimean War, and the unknown Great American West. In lieu of a horse, my motorcycle hauls my equipment and materials, and instead of wars, I am documenting people."