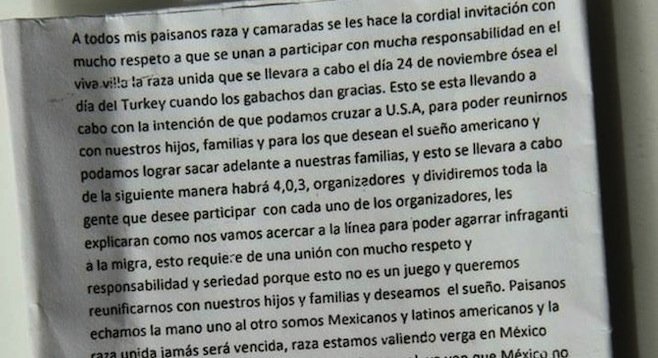 Authorities are searching for who’s responsible for the attempt at a mass illegal border crossing on Sunday, November 24. At least 100 migrants tried to cross the border à la Cheech Marin in the film Born in East LA.

For a couple of weeks before the incident, anonymous flyers and notes were reputedly passed among people living in the Bordo area and those who visit Padre Chava's soup kitchen in Tijuana.

The note asked for people to respectfully gather in the soup kitchen a day before Sunday, when, according to the writer, Americans celebrate Thanksgiving. According to the note, there would be organizers to guide people on a route where they could cross the border without being noticed by “la migra." The note went on to insult the Mexican government and its current president, the increase in taxes, and the selling of Mexico's oil company, Pemex. The note ends with inspirational sentence that the goal could be accomplished — "Si se puede." 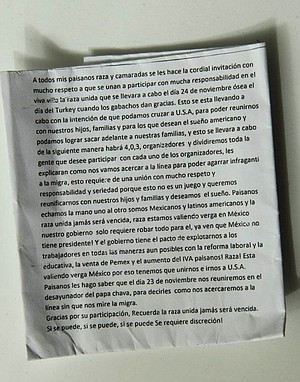 On the day of the crossing, there were no organizers and no apparent plan. The people gathered and marched toward the border until they encountered Border Patrol officers who had no clue of what was happening.

Three documentary filmmakers, under the name Uk Bálaam Productions, were on the scene; their video, published in Milenio news, has been posted on the internet.

It is easy to assume that the filmmakers started the movement to get better material, but, in a public statement, they have distanced themselves from what happened. They say they had no idea what was going to happen on November 24 — they went to film the Bordo like they do almost every weekend.

In the statement, they remind people that they have been documenting life in Bordo for more than a year and that their intention is not to cover illegal immigration or attempts to jump the border. They claim to have been filming and following four individuals that live in the improvised houses on the river known as “ñongos.”