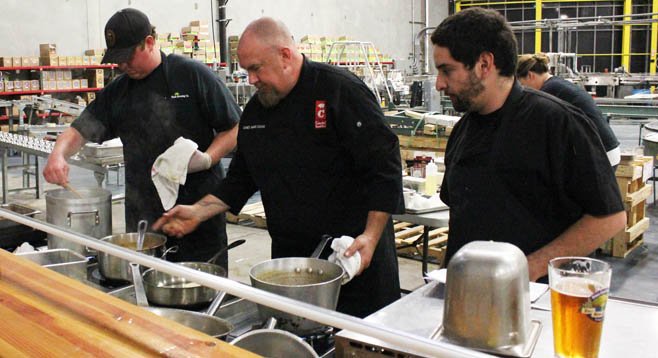 Mira Mesa brewery teaming to make most of spacious environs

Nowadays, just about every brewery uses their tasting space to hold special events that explore craft beer to a deeper degree than the basic sampler flight. Some, take things to the next level in a number of big ways, and since moving into a much larger facility in 2011, Green Flash Brewing Company (6550 Mira Mesa Boulevard, Mira Mesa) is among the most innovative of the event-planning class.

Green Flash is home to numerous beer and charity festivals throughout the year and regularly holds grand-scale beer release events, educational gatherings, movie screenings, and a host of other happenings, all of which are complete in their conception and execution. One of the best examples is the company’s Supper Club dinners, wherein the crew at Green Flash invites the culinary staff from popular restaurants to cook in or around their tasting room.

The mission is simple, to craft five courses that show off the style and cuisine of the guest eatery and also pair up nicely with Green Flash beers. I have left both of the previous Supper Club dinners I’ve attended feeling not only full (but not stuffed, which is quite nice), but impressed by the length the events and tasting room staff went to stand out in a town awash in beer-pairing dinners.

For starters, the food is on point. Green Flash’s tasting room manager and certified Cicerone Dave Adams works closely with each restaurant, often selecting the venue in the first place. It’s more than a quick tasting—the guy spends serious time going through dish development to make sure the right beer is selected...and it shows. Additionally, Green Flash brewmaster Chuck Silva is a foodie with a penchant for cooking and pairing, which gives him the ability to not only stand by but help explain the marrying methodologies involved.

The dinners in which I partook involved chef/proprietor Hanis Cavin of North Park’s Carnitas’ Snack Shack and executive chef Mike Kessler of Craft & Commerce in Little Italy. Both are hot properties, particularly among fans of artisanal products, and both showed well. Cavin stayed true to himself, putting forth three dishes incorporating pork, but departed admirably with vegetarian offerings—a foraged mushroom risotto and shortbread with lemon curd and nasturtium flower marmalade. The latter went well with Green Flash’s Great American Beer Festival award-winning Trippel thanks to its flowery Belgian yeast character and the fact it has a maltier profile than most tripels. On the entrée front, the pairing was straightforward — Green Flash Double Stout served in the glass and used as the main ingredient in a rich, chocolaty braising liquid for pork shanks that, as expected, were cooked to perfection.

Craft & Commerce composed a comparable menu with arguably more harmonious pairings. Insanely memorable was dessert, which served as a teaching moment; a beer-and-food-pairing 101 of sorts. Most of the diners probably had no idea how well blue cheese goes with barley wine, but after having C&C’s buttery fig and Stilton-adorned Eccles cake in the same gulp as Green Flash’s (collaboration with Cigar City Brewing) Candela Rye Barleywine, they’re likely never to forget. Also highly successful was a curry-laden Peruvian-style sweet corn cake cut beautifully by a session IPA brewed exclusively with Citra hops.

So why tell you about this now…after the fact? (Just like you, I find zero value in articles about things that have happened and will never take place again.) Green Flash’s next Supper Club dinner will take place on December 16. This time around, the menu will be presented by an interesting trio — Pizza Port owner (and proven mobile cook) Vince Marsaglia, Samantha Parker from Flying Pig Pub & Kitchen in Oceanside, and Toronado chef Nate Soroko. Tickets are currently for sale.