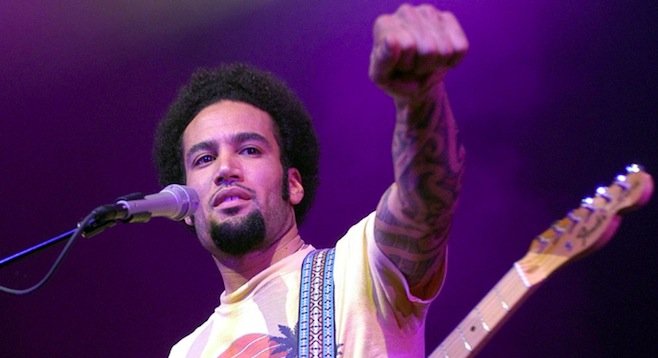 Ben Harper gets personal at the Copley

Ever wish you could host one of your favorite musicians in your living room, interacting and listening to your favorite songs? Ben Harper turned his show at the Copley into just such an event, dishing out life experiences and thoughts on such subjects as love and the meaning of life.

For example, a life story involving couch surfing and struggles in his early days led to Harper showing up late to do a show at the Mint in L.A. (an incongruously situated but cool place, if I may digress), where he witnessed the opening act, Mazzy Star, doing “Fade Into You.” The story led to Harper playing a beat-down-looking upright piano to cover that song. Chilling.

It was such an intimate, personal show, that Harper even pulled his mom onstage to perform two songs with him, not to mention bringing out Charlie Musselwhite and his golden harp for three songs as well.

Opening with “Welcome to the Cruel World” on his lap-steel guitar, Harper mesmerized the joyous audience, burning them down with his soulful solo performance. Who would have thought that after witnessing numerous incarnations of Ben Harper, just himself and his music would be the best rendition yet?

He's such a fantastic and talented musician, I enjoyed his band Fistful of Mercy's song Father's Song, I really think it's an amazing and very sweet and perfectly made one. Such musicians like him is a great inspiration as he is not in his twenties and even thirties and he is on stage for many many years, but he keeps on releasing new and awesome songs over and over again.