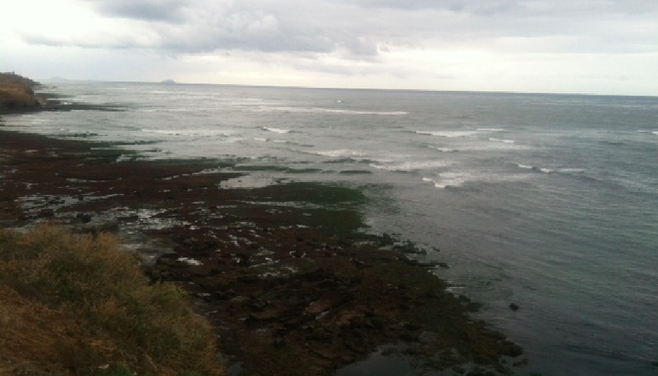 On Memorial Day, May 27, at 8:30 a.m., San Diego police responded to a citizen’s call at Sunset Cliffs Natural Park. Early-morning surfers were surprised to find a low-tide rave taking place in a sea cave on the beach.

An estimated 75 to 100 people gathered at the site. There was a portable generator, strobe lights, and music. Surfers didn’t mind the party so much as the broken beer bottles on the trails; also, the cans, bottles, and litter on the beach.

Several tents had been erected on the cliff bluff and people were sleeping out in the open in sleeping bags. People slept in the middle of the trails, and there was a small fire pit there also. People had urinated on the trail and along the cliff bluff.

A local gave warning to the violators before calling police; the offenders had time to clean up the area and break down their camping gear. Three police officers responded to the call and made contact with the campers. No citations were written because the camping gear had been stowed away. At the request of surfers who stood by, the ravers and campers cleaned up their trash. 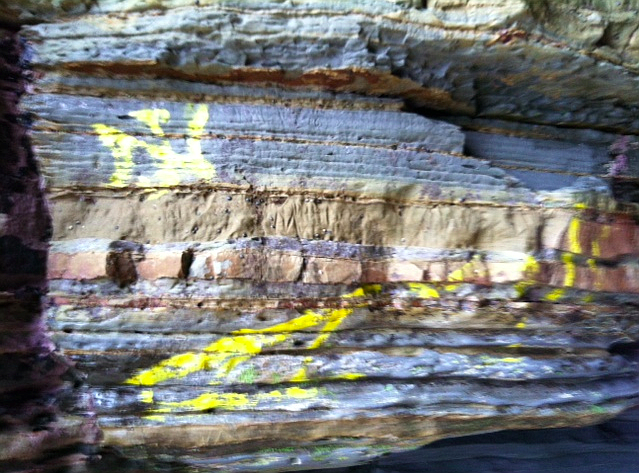 Graffiti inside a cave

The police officers made the point that they will respond to calls at Sunset Cliffs Natural Park and that they want to hear about such illegal activities.

Since the 2008 beach booze ban at city beaches, Sunset Cliffs Natural Park has become a hangout for taggers, suspected gang members, and others looking for an unenforced area to party. There has been a significant increase in graffiti, broken glass, and empty alcohol containers at the beaches.

The "ravers" were not the ones who had the fire or left litter and beer bottles. This group is not ravers they are very conscious partyers. there was about 20 that stayed behind to the wee hours making sure every last piece of litter was cleaned up as well as every beer bottle. There were many other people, not involved in the cave who were lighting fires and throwing beer bottles off the cliff who were not associated with the people throwing the cave party. This group of "ravers' do not litter and stick to a strong environmental code of "Leave no Trace"

I've been down to Sunset Cliffs Nautral park a fair number times, and every time I've found it trashed. I've even seen a couch once. How people got a couch down there, I'll never understand - but that's besides the point. Whoever wrote this article not only should reconsider their career in journalism, but apologize to the San Diego Reader for publishing such ill researched "facts". You can tell this is a slander piece with little attention paid to any real journalism practices. I guess the reader must not have an editor, or perhaps an incredibly incompetent one. The picture of the graphiti trying to draw a line between this party and that piece of graphiti is utter rubbish. That piece of graphiti has been in that same spot for years, and will remain there until someone stops publishing flippant articles and picks up a scrub brush and does something about it. The only fact in actual article is the fact that 0 citations were issued - shouldn't that really speak for itself? Why does the author of this article have to take up an effort that the law deems unnecessary? To me it sounds like the author has more of a problem with the party or party patrons themselves and should keep such petty issues out of a public publication. I personally will no longer read the reader and will instruct friends and family to do the same. Until this journalist is fired, I simply cannot take them seriously anymore.

Perhaps the cops couldn't easily distinguish among the ravers, partyers, campers, and litterers, if I have the story straight, and so were unable to assign blame one way or the other by category.

Allow me to help you. The first issue I see is that the opening two sentences of this article create a false connection. The rave happened the night of the 25th. There were definitely some surprised surfers that morning but no police were called. I know because I was present from start to bitter end. Police may have been called to the beach on the morning of May 27th but they wouldn't have found a rave. Any police response was for a different group of people on a different day.

This is an important distinction.

The facts regarding the “cave rave” are: No police responded to the event. The area was left very clean. The graffiti picture you use in your article is from a different location and time. No one camped there. Everyone left the area in the morning. No one made a fire pit. No one I saw had glass. People were told to bring cans. Public urination…well yeah…you got to pee somewhere.

Mr. Olson, I see you have written a few other “Neighborhood News” articles for this website. From reading them I gather that you are a surfer who lives in the area. I understand why you would be territorial and I understand why you would write an article that paints the local surfers as mistreated heroes fending off a drunken hoard. But you are never going to graduate to writing real news unless you get your facts straight. This shouldn’t be a sounding board for things that piss you off.

The cave rave was one incident that happened at Sunset Cliffs that weekend. It sounds like there were many others. I understand if the rave needs to be part of your story but your headline should read: Sunset Cliffs Attracts Memorial Weekend Parties Causes local wannabe journalist to write terrible article

Whether you agree with the article or not, let's set the record straight. These idiot candy ravers shouldn't have been there in the first place. This is public land, it's not their own personal stomping ground to do as they please. Spare me the line, "these ravers don't litter". Even if they didn't bring one ounce of litter to the table, the Cliffs and it's natural inhabitants don't need strobe lights, loud music and people stomping all over.

Oh and now you won't patronize the Reader anymore and you'll tell the two people you call "friends" to do the same. I'm sure the Reader is so worried about losing your input. It's a free paper, dumbass. But you've been to the Cliffs a fair numbers of times and it's always been trashed. I'm sure you've done your part though and tried to clean it up, right ? No, you just sit on your ass and bitch.