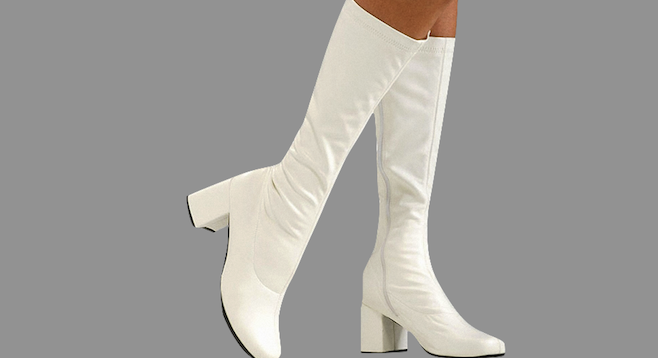 Back in the ’60’s, ’70s, there was a big statue of a go-go girl on a sign in Mission Valley/Grantville that was visible from the 8. I seem to remember that she was all dressed up (or not!) to suit the season and that it was a hoot to see. What happened to her? Where’s she dancing now?

Nothing lasts forever, and that’s particularly true for fiberglass and nightclubs. The go-go girl who danced atop a sign pole at the Box Office nightclub in Mission Valley (from about 1965 onward) came down years ago after a long and storied tenure. She’s either destroyed or lost in storage somewhere, but in her day she was famous for her changing outfits, which she never would have gotten if not for Dr. Tamzon Feeney, DO.

Back when Doc Feeney was a teenage candy-striper at Mercy Hospital, she passed by the go-go girl on her way to volunteer. Fifty years later, she still remembers the day she turned to her mom and said, “that’s the ugliest thing I’ve ever seen.”

It turns out the young Tamzon and her friends thought the go-go girl had a mug too ugly for words. Working with her mom, teenage Tamzon hatched a plot to get the go-go girl pulled down. Under cover of darkness, her and her cadre of teenage activists managed to get a tarp strung up to cover the scantily clad dancer. They stapled a “Teens Against Immorality” sign to the tarp and alerted the news media. Their thought was that making it a morality crusade would play out a lot better with the press than just saying, “that girl has an ugly face.”

They were right. In no time flat, their story blew up on the AP newswire across the country. Everybody wanted to congratulate forthright Miss Feeney. Some people even gave her and the Teens Against Immorality enough cash to fund their “campaign.” They learned that the Alcoholic Beverage Commission could revoke the liquor license of a business displaying “offensive” advertising. A couple of thousand signatures later, the Box Office faced a choice, either pull down the girl or go swiftly out of business without a liquor license.

At the 11th hour, someone from the Box Office proposed a compromise. “What if we cover her up?” The teens, by that point enjoying themselves and their fame enormously, acquiesced to that request and the go-go girl ended up wearing a muumuu, the first of her many costumes over the 20-odd years that she danced above Mission Valley.

The whole affair turned out pretty well for everybody. The future Dr. Feeney got to enjoy a taste of fame, the Box Office got some serious PR, and the go-go girl’s legend grew and grew. There’s a little irony in the fact that the statue’s face, the ugliness of which initially offended the future Dr. Feeney, was seldom obscured by her costumes. Since it turned into a lot of fun, she didn’t care as much in the end.