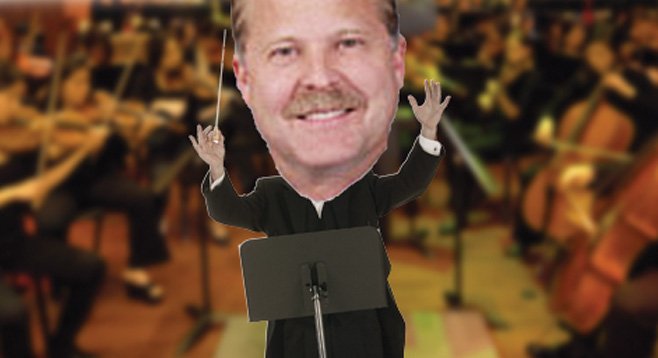 Anyone who doubts the politically incestuous nature of San Diego’s old money — still playing a big role at city hall these days — has only to review the family connections of the Evans clan, owners of the Bahia hotel, Catamaran hotel, and the Lodge at Torrey Pines, all benefiting from leases of public land. Republican Bill Evans — treasurer of the hotel district trying to force Democratic mayor Bob Filner to sign a contract negotiated by GOP ex-mayor Jerry Sanders, a key beneficiary of Evans’s family largesse — is the son of the late William D. Evans, who obtained lucrative rights from the city council to build the Bahia way back in 1952, more than 60 years ago.

The elder Evans died after a heart attack on Easter weekend in 1984, leaving the family business to his wife Anne, daughter of Lucille and Roy M. Ledford, a wealthy Republican physician. The Ledfords lived in one of Point Loma’s most elegantly appointed mansions, where the couple held major political fundraisers, including a particularly memorable one in the 1970s for ex–movie actor and GOP U.S. senator George Murphy. Besides oversized campaign events, the sprawling residence was the scene of an annual Easter-egg roll, featuring as many as 500 children, according to Lucille’s April 1970 obituary in the San Diego Union.

Their son, Roy M. Ledford, Jr., known as Merl, became a doctor and went into practice with his father. He had five children, one of whom is Richard Ledford, today one of the most wired influence peddlers at city hall. A former top aide to Republican mayor Susan Golding, Ledford now plies the lobbying trade on behalf of a host of clients, including, according to a March 19 disclosure filing, the San Diego Symphony, of whom his grandparents were particularly fond. Ledford’s task is to “Secure a long term use of the Marina Park South,” on San Diego’s port-controlled bayfront “for utilization by the Symphony Summer Pops Series.” There is no mention about the potential terms of that deal.

On a less cultural front, Ledford is also at work for giant trash-hauler Republic Services, Inc., “to secure the award of contracts for recycling and waste disposal at the San Diego Convention Center Corporation and the San Diego Regional Airport Authority.” In addition, Ledford’s influence is being deployed on behalf of San Francisco’s High Flying Foods and Procurement Concepts, Inc., both for “fulfilling concession contracts awarded by the San Diego Airport Authority Board of Directors.” As it happens, the chairman of the airport authority’s board, appointed by Jerry Sanders, is Robert H. Gleason, chief financial officer of Evans Hotels, which is run by Bill Evans, Richard Ledford’s first cousin.

A wondrous scheme of connectedness. A friend of mine wants to make a cartoon diagram of all the ways movers and shakers in this town are connected by blood or common interests in service to themselves. And this is a perfect example. (My personal fave is very rich and civil visionary Malin Burnham whose son-in-law owns all the ACE parking lots in town.)

Thanks, Matt. You are the bomb. Thanks for the picture of the orchestrator. Please consider asking the question of the guy who is the Italian-American League director in Little Italy: Are you in the mafia? Their banners down there celebrate Basilone, but that was 1945. Thank you for mentioning 1952. I was born then, and 1970, graduated high school. Directing you to 1961, in between, all it is was a wreck off Palos Verdes called The Dominator. A wreck in the sand might stay there 1,000 years. You can put that in. Oh, right (scrolling up), I laughed when reading the late William D. Evans dies of a heart attack on Easter, we just having finished one. Has a buffet at the Hilton, so, the eating, etc. Black's Beach was awesome. I was like a blue sail marlin. I was there for you, peace, graduating UCSD in 1984. Okay, Easter, located, right. Notice how greedy given a holy DAY, now it's a weekend. Look how much worse I CURSE GOD and KILL GOD and THE BLOOD OF GOD is to our, "I swear to God". That's weak. Sacrebleu.