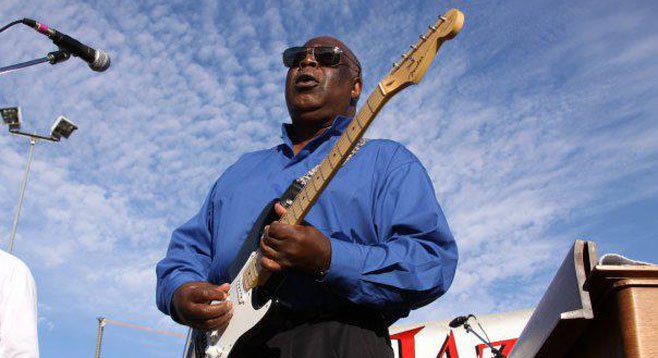 “You gotta have a passion for it. That’s got to be number one. Number two? You got to be willing to pay your dues by practicing day and night.” We meet up for lunch, Bill Magee, a mutual friend named Lane Rider, and I. Over corned beef and chicken soup, I get a blues lesson from the gravel-voiced guitarist and bandleader. “The first six months, everybody’s gonna tell you to shut up and stop making that noise, that you ain’t never gonna ever make no music. But you gotta not listen to that.” What you have to listen to, he says, are other blues musicians. “Influences. What’ll happen is you’re gonna pick up some of their sounds, but you’re gonna start to make some of your own sounds, too.”

Magee, who will turn 70 soon, claims to be a veteran of such classic bands as James Brown’s Famous Flames. Part of the Bill Magee experience are the apocryphal tales he spins about gigs with royalty: BB King, Muddy, Jimi Hendrix, and so on. But his own guitar chops cannot be disputed.

Magee says he practices for hours a day.“I watch football. That game’s gonna last four hours. I have my guitar in my hand the whole time. I can watch television and practice at the same time.”

To this day, Magee refuses to make a pre-show set list. “I learned that way back. When you make a set list, you’re pre-judging your audience. How you gonna be at home and know your audience?”

What does Bill Magee disdain in a fellow blues traveler? “Someone playin’ a whole lot of notes,” he says. “BB [King] could hit but one note and make the hair on the back of your neck stand up.”