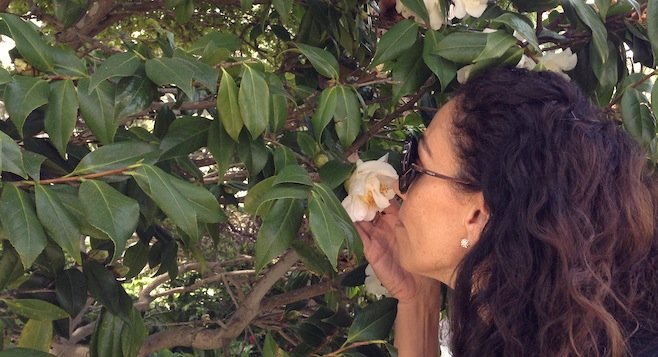 My sister and I clinked glasses filled with chilled wine (hers a straw-colored chardonnay, mine a blushing rosé) and then leaned back in our chairs with stoned smiles. My eyes wandered the expanse of Jane’s mane — a frizzy, puffed-out version of her long, dark, natural ringlets. “Is my hair as messed up as yours?” I asked. Jane nodded slowly, her lazy smile turning up slightly at the corners to reveal her amusement. “Whatever,” I said and took a sip. “I don’t care — no spa visit is complete without a good scalp massage.”

Jane had just ascended another rung of the Big Pharma ladder, and I had just taken on another project in my bid to take over the world. Neither of us could remember the last time we’d taken a day off. As has been our custom, we used Jane’s birthday as an excuse to take a break and indulge in a bit of pampering. First, we received skin treatments (facial and massage) at Indigo Salon in Hillcrest, and then we walked through Balboa Park and landed at the Prado. On the way, my usually frenetic and distracted sister was so relaxed and in the moment, she stopped to smell a flower.

While waiting for the check to arrive, the reality of all of the work that awaited me at home was more sobering than espresso. I often tell people that when you work from home, you can never go home from work. These days, I recognize that having too much work is a good problem to have, but my awareness and gratitude doesn’t always serve to make my seven-day workweeks any less tiring.

When my sparkling spa glow began to fade into a dull shade of worry, Jane offered, “How ’bout, instead of dropping you off at home, you come with me? I’ve got to run a few errands with the girls — fun stuff — I need to get things for Olivia’s birthday party this weekend.”

“That could be cool,” I said, happy to have a reason to take an entire day and not just a half-day away from my obligations. “Hey, think about it — we’re grown-up sisters, going shopping with your young daughters. Big sisters, little sisters. Isn’t that crazy?” I could tell by her face that she wasn’t as “whoa, dude” about it as I was, but Jane agreed with me anyway.

Hair pigment is the only discernible difference between my sister and the two miniature versions of her — Jane’s thick tresses are sable, whereas her girls’ long locks are corn silk. Olivia, 6, and Bella, 9, had adorned themselves with accessories that matched their tiny ensembles (white sunglasses, blue purse, glittery pink headband).

The girls were on their best behavior when we arrived at the giant 99-cent market in La Mesa. Olivia had chosen “butterflies” as her party theme. As we walked through the store, she examined balloons and plates with the discernment of Gordon Ramsay inspecting dishes on the line. “They get along so well,” I said to Jane as my nieces discussed the party possibilities for butterfly garden ornaments. “I can’t remember all of us getting along that well at that age.” 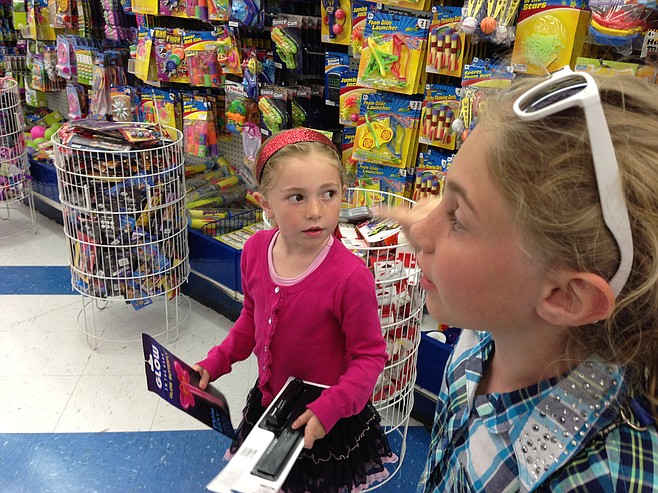 “This is a rare moment; it won’t last,” Jane said. Still in my relaxed haze, I smiled, shrugged, and went off with Bella in search of party favors while Jane escorted Olivia to the “potty.”

I never wanted kids — still don’t — but I admit I don’t mind it when I’m alone with a niephling and old ladies pause to make sure I see their approving, understanding smiles. I play along and smile back, as if to say, I know, child-rearing, amirite? It’s my grown-up version of playing “house.”

When Jane and Olivia rejoined us, we all headed over to the candy aisle, where things began to get a little less relaxed. As Jane looked for piñata stuffers, small hands reached up to wave item after item in front of her face. “Can I have this?” “Mom, Mom, Mom... Can I have this?” Jane’s simple “No” was light and firm, as plain and unquestionable as the sunrise.

It wasn’t long after that the bickering began. I listened in as Bella suggested an idea for an “older kids lounge” that Olivia shot down, right before reminding her sister who the birthday girl was. “I get to choose, Bay-la,” Olivia announced.

“Mom,” Bella hissed, “Olivia is being a diva.” She stole a glance in my direction and then pulled on Jane’s arm and said, “And not the good kind.”

I laughed with Jane, all adult-y and knowing, as we led the girls to the checkout. Our next stop was Party City, where Olivia chose a white unicorn piñata with a rainbow mane and tail, earning the Good Diva Seal of Approval.

By the third store (Michael’s, for googly eyes and pipe cleaners to make the candy butterflies), Jane and I were beginning to wear down. Bored with the task at hand, I turned to my phone for entertainment. “What are you doing?” Jane said in exasperation. “I need help finding the googly eyes.” I stopped and asked an employee, who directed us to the correct aisle, and then, once there, I returned my attention to my phone.

I rolled my eyes. “With what? You’re just wandering around like you don’t know what you want,” I snapped.

“I’m trying to get this coupon, and I need you to look it up and get one, too. It’s 50 percent off — oh, shit. Shit, shit.” Jane tapped at her phone in distress and I snapped to attention.

Jane had found what looked like a 50-percent-off coupon, but the moment she selected it and entered her phone number, she began to receive texts from her carrier, alerting her to the fact that she’d just been billed $9.99.

I remembered how relaxed Jane had been just hours before, how she’d looked smelling that flower. And now she looked to be on the verge of tears. “You know what? This ain’t no thing,” I said. “I can cancel the subscription in the car, and then, I know it’s a bitch, but you’ll have to call AT&T to remove the first charge from your bill.” Jane took a deep breath and handed her phone to me.

“You know what I think?” I said as we carried the last of the goods to the car, “I think we need another spa day.”