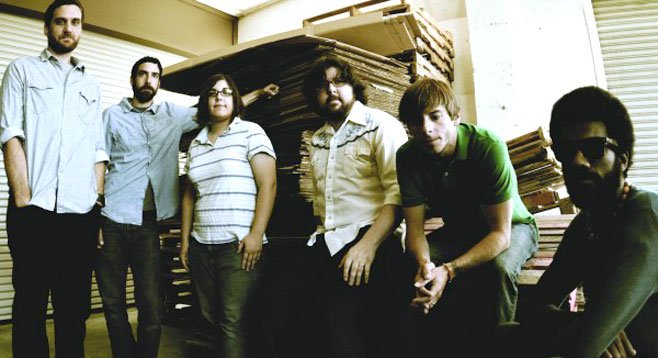 The release party for Hills Like Elephants’ new album, Feral Flocks, on the local Requiemme Records label and distributed by BMG/Chrysalis, happens March 29 at Bar Pink. Featuring a dance-centric sound that frontman Sean Davenport calls “Motown with drum machines,” a video for the single “Ninjavitus,” shot in North Park and directed by Eric Casas of the Visualists, is playable on their Reader page.

The Heavy Guilt’s third CD is a self-titled effort set to drop April 6 at the Irenic in North Park. “There will be a record show, all vinyl, an art show, and great bands,” says Alfred Howard of the bill that includes Dead Feather Moon, the Steelwells, and Trouble in the Wind. “Expect a full set from the Guilt, with some guests joining us to fill out some of the layers on the album. We will probably cover a song or two by either Them, the Box Tops, Neutral Milk Hotel, or the Stooges.”

The release party for Folding Mr. Lincoln’s third full-length (Two Rivers) happens April 6 at Rebecca’s Coffeehouse in South Park. “It’s a narrative concept album, [telling] the story of life-long love of a fictitious couple, Lynne and Eugene,” according to Harry Mestyanek, who says they’ll perform the record with guest Dennis Caplinger, who played dobro, banjo, and mandolin on the album.

The Material will debut Everything I Want to Say on April 12 at the Soda Bar in City Heights. “Although it shows a much more raw and personal side of the Material,” says frontwoman Colleen D’Agostino, “my hope is that it will be relatable to anyone who has ever experienced the love, loss, inspiration, and desperation described in my lyrics.... In my mind, it’s a more real rock take on anything we have ever done.”

New Mexico (formerly Apes of Wrath) premieres their Malpais full-length on April 23. “We tracked everything through an old-school Otari 16-track, one-inch tape machine,” says singer/bassist Rob Kent. “With tape, you get one shot at it, no digital tricks in post[-production], splicing together two versions of a performance. Our newly added synthesizer sounds came from ’80s classics; the Roland Juno 106 and the Korg MS2000, the voices of our childhood.”

A few more: The Hindsight Compilation from Hindsight Rehearsal and Recording Studio features over a dozen local bands, several of whom will play the March 29 release party at Hillcrest’s Ruby Room.

The first full-length from I Wish I since 1997, Convolutions, debuts April 13 at the Soda Bar.