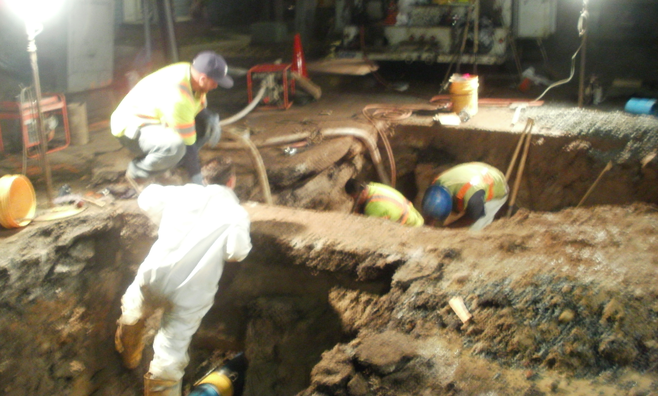 On the evening of June 26, about three dozen people from the neighborhood around 33rd Street in Normal Heights finally learned the details of what one resident called "the sewer line project from hell.”

Five San Diego police officers also were there, working on overtime to monitor the peaceful but rowdy meeting.

Project 767, originally awarded in March 2012 at $2.9 million, was supposed to last about 28 weeks. Instead, the price went up to $3.8 million and the project stretched to a year, during which sections of the pipe were torn up again and again — or so it seemed to residents.

The streets were trenched deep, and heavy equipment, steel plates, and enormous pipes blocked driveways and provided continual noise and dust. The water main was broken and cut off at least five times, power lines were crushed (causing a ten-hour-long power outage), and streets (from I-805 to Felton Street and from El Cajon Boulevard to Meade Avenue) were closed again and again.

"What we really want is an apology, and what we're getting is a laundry list of what occurred," a 33rd Street resident named Ted said at the meeting. "We should have been told while we were living through it."

Dave Zoumaras from the city's Department of Public Works explained that when the contractor dug down the 18 to 20 feet to get to the sewer line, well below the water lines at three to five feet, they found unstable soil conditions, made worse by the “crush weight” of the six to ten feet of heavy, wet clay above it.

"We expect there to be problem areas, but we do not expect every foot of a project to be a challenge," Zoumaras said. "It was a struggle every foot of the way." 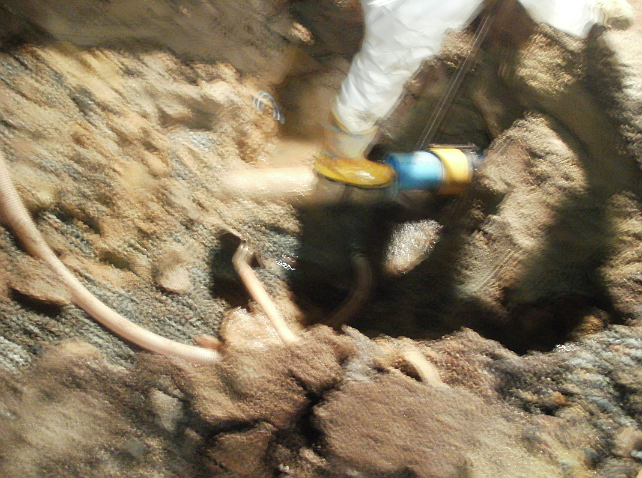 The dry, loose soil beneath the clay shifted so much that Cass Construction had to fill trenches before they went home because they weren't stable enough to cover and leave overnight, Zoumaras said. And the water line they were supposed to leave in place and dig around was at least 60 years old and broke repeatedly. Replacing the water line had to be incorporated into the job.

"We did not make a dime on this — we lost a substantial amount of money on this project," said Kyle Nelson, president of Cass Construction. If he had the chance to bid the project again, he added, he would run away.

That unstable soil may be why residents' sidewalks, curbs, and porches are now collapsing, residents said.

"They were banging so hard that things fell off the walls," a resident said. "We literally felt 7.0 tremors for weeks and weeks of pounding, all day every day."

Residents were directed to submit claims to the city's Risk Management Office, but some said they'd already been rejected.

"You've just been given the finger," Steve Graham said.

Some residents said that “no parking” signs were added for the construction and that they are still garnering tickets, even though the construction ended in May. And there were a couple of days when cars were towed off 33rd Street with no warning to the owners.

The Public Works staff promised to work with Todd Gloria's office to support people in getting their tickets dismissed and towing charges refunded.

Nelson, from Cass Construction, and the Public Works Engineering Division staff said that they have spent a lot of time in meetings figuring out what went wrong — from unexpected soil conditions to leaving residents in the dark.

"The number-one lesson here is that we need to communicate better," said Tony Heinrichs, director of the Public Works Department. "We're going to do a better job of letting people know what's going on in a timely fashion."

Although a lot of factual information was provided, the forum didn't allow for much venting of anger and frustration, and there was much to go around.

"What we really want is an apology," said Carrie Spillane. "What we're getting is ‘okey-dokey,’ and you know what that really means."

The city botched the project, caused unnecessary hassles for the residents on and around these streets (like me), and failed to communicate properly about what was going on.

This isn't a case of locals being whiny.

There is no reason for this job to have turned into such a disaster.

Anyone can understand unforeseen complications that develop during a construction job, but with all the community offices, the staff people working in the neighborhood rep's office, the community outreach officers in the SDPD, and the local neighborhood council, the local residents should have been kept informed every step of the way and extra care should have been taken to mitigate any possible negative effects on residents.

Makes one wonder what all this "community" action is good for.

Don't be intimidated by Risk Management, especially if you have before and after pictures of your sidewalks, curbs, and front porches. Better than 1,000 words.

Adding this to my own post: Cass Construction took pictures (videos?) of all existing conditions before the 767 began.

Bobparks77 your an [edited — no name-calling]. Don 't insult the residents of Normal Heights with your stupid comment. Especially if you don't live in the neighborhood but you've not lived thru a year of power outages, loss of water, fowl tasting/smelling water when it did work, loss of parking and a long list of complaints you have no idea what we the residents of Normal Heights lived thru. The only grip that's needed is your grip on reality. You only come across as uninformed and butting in where your opinion is not needed or useful.

Five police officers getting paid OT to attend a community meeting... Cass Construction should be charged for this farce too. Their joke just doesn't end, does it?

Taxpayers paid for this project gone wrong, and they deserve answers from all parties involved.

Now changing how this department does business? I will believe it when I see it.

Gee, would you be the Robert J. Parks, Attorney @ Buchanan Ingersoll & Rooney?

http://www.bipc.com/robert-j-parks/ Check your id and see if the photo matches this guy, it is not pretty.

This is a highly unusual manner to answer a request for your assistance by a member of our group to represent us in a law suit against the City & Cass Construction.

[edited — no name-calling] You are the one who needs to get a grip. You need a reality check on professionalism. It is not becoming of you or your profession. 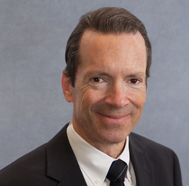 BTW, the cops were very low-keyed and nice to everyone at the meeting. They stayed out at the back and gave off a relaxed and friendly vibe. Extra thanks to Bill Jenkins and United Methodist for hosting this.

Seems that our Normal Heights Community has an Enlightened and Caring Community All Around. One of the few places. Hale Herbert Hoover High !! Steve say something intelligent for a change:)