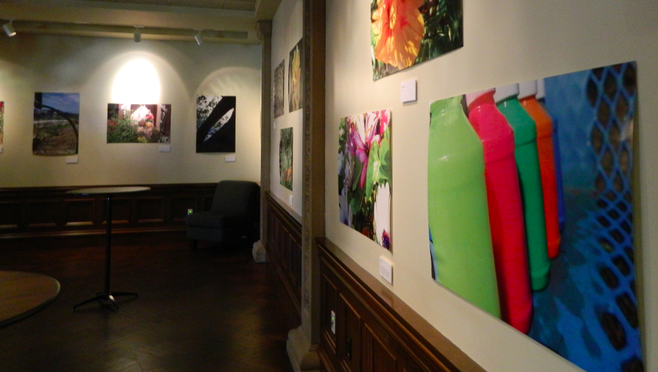 Trained to use 35-millimeter cameras

In multilingual Linda Vista, schoolchildren are learning to write in English. It’s not always easy. Fifteen-year-old Jacqueline Garza admitted that only a few months ago she was failing her eighth-grade English class.

But on the evening of June 25, Garza read a second-prize-winning essay before a photo-gallery opening in the Student Life Pavilion at the University of San Diego. She said she turned things around by taking a photography class during this spring’s Montgomery Middle School Intercession Academy. The assignment for students was to photograph what they liked in Linda Vista or things they wanted to see become better.

So, photography helps writing? “Yes,” Garza explained, “because we wrote paragraphs about the pictures we took. You can see what you’re writing about. You’re telling people your community is beautiful to visit because it has this and that.”

Christian Otero, also an eighth-grader at Montgomery, spoke to the gathering after Garza. Afterward, he told me that the photography program has “helped me to go out and meet new people.”

Twenty-three other Montgomery Middle School students joined Garza and Otero in the photography training. They used basic 35-millimeter cameras that had adjustable lenses. Autofocus was not allowed.

At the gallery opening, each student displayed a favorite photo. There were familiar images of the Linda Vista landscape, lots of people shots (including one of two homeless men outside McDonald’s), and a number of color-rich flower pictures. The students chatted excitedly in small groups and answered questions about their work for the roughly 30 visitors in attendance.

The photography program has been the brainchild of Bayside Community Center in Linda Vista. However, the gallery was not originally part of the plan; that came about in a burst of brainstorming during the past several weeks. Putting it together with USD was so sudden, said Jennifer Bright, a program coordinator at Bayside, “that I felt like we were doing a pop-up.”

The Mission Valley YMCA also assisted the photography program, and the gallery opening received a Nissan Neighbors grant and funding from the Procopio law firm. The gallery will be open through June 28.

Let's hope the next time they do this, they hand out digital cameras instead.