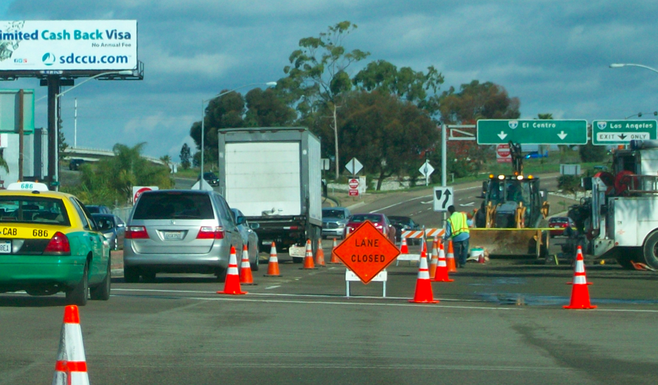 An aged pipe burst and made for a messy and congested effort to access the Rosecrans Street freeway entrances between Hancock and Moore streets. Traffic flow was down to one lane all morning heading east past the Shell Gas Station at 3711 Camino Del Rio West.

A length of seemingly excavated blue pipe lay nearby, tossed aside, as the crews worked alongside a row of slowly moving cars. Fortunately for neighboring businesses, the mishap did not flood the area to any great degree.

I spoke with Alex at the Denny's across the street at 3704 Camino del Rio West, and he said that even though the city crews were still out there working through the evening, they "never lost any water."

Next door to Denny's, Cotixan Mexican Restaurant also did not lose water service. However, earlier in the day I overheard the manager of the Starbucks drive-thru at 3145 Sports Arena Boulevard complaining of "problems with their water pressure."

Has anyone mapped out the locations of the breaks with the infilled land where the San Diego River used to flow into San Diego Bay? If a pipe trench is on solid land in part of its alignment and water-filled sand in another part, will the pipe not be inclined to break at the intersection of the two soil types? What about multiple breaks at the same locations?

Which technical fixes (other than just putting in a new section) does the City use?