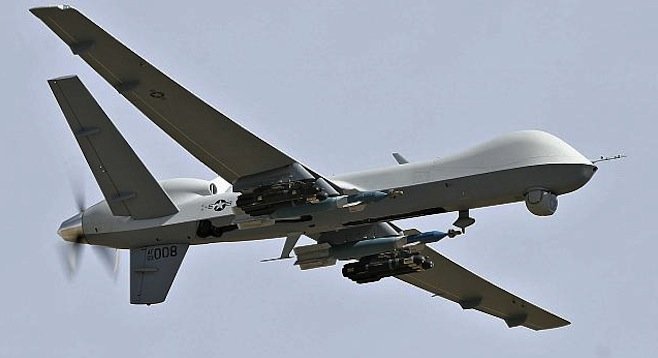 Drones can be used in search-and-rescue, drug enforcement, border control, and surveillance, says General Atomics, pointing out the peaceful purposes, according to The Guardian. But a human rights group named Reprieve asks "Should a firm which produces armed, flying robots with names like Predator and Reaper really be surprised that they are not considered to be humanitarian by the public?"

The self-proclaimed “last of the independents.”
Next Article

His World War I experiences bleed through

Drones can be used in search-and-rescue, drug enforcement, border control, and surveillance, says General Atomics, pointing out the peaceful purposes, according to The Guardian. But a human rights group named Reprieve asks "Should a firm which produces armed, flying robots with names like Predator and Reaper really be surprised that they are not considered to be humanitarian by the public?"

“Nunca comiste una igual,” promises the menu. “You’ve never eaten one like it.”
Next Article

Working our way through a new vision

Point well taken, Don. When those names were assigned, there was not a soft public relations side to it. And they may have allowed some nerd bird designer-types to come up with tough sounding and sinister names for them. Now they probably rue those decisions. How about the "Blue" Bird and the "Blue" Jay? Fits with the owners, doesn't it?

Then there's the menacing appearance of the drones, and the one shown in the photo has this bulge where the cockpit would usually be, but is has no glass, no eyes, no face. Rather spooky, I'd say.

Visduh: Precisely. If General Atomics complains the drones are misnamed, who named them? When "Predator" was selected, the military was probably the only market the company contemplated. Best, Don Bauder

These planes could do the Lord's work in Mexico taking out drug traffickers. In a year or two the entire drug cartel could be wiped out with Hell Fire missiles launched from Predators.

Maybe they could do that, but would the rotten Mexican government ever take such a hard-nosed approach? I really doubt that. Their government can be very hard on small fry, but goes lightly with those who have money, ill-gotten or otherwise. What can be done and what will be done are so often very different things.

Visduh: I know some other countries that go lightly on those who have money, ill-gotten or otherwise. You live in one of those countries. Best, Don Bauder

Agreed. Most, if not all, countries have unequal justice before the law. It's also a fact that the legal system in Mexico is sluggish, rife with corruption, and likely to be influenced by the politicians in power to a far greater degree than anything we experience here.

Visduh: I agree that while our judicial system is tilted toward those with money, ill-gotten or otherwise, I also agree that Mexico is worse. Best, Don Bauder

Burwell: And how many innocent people would be wiped out, too? The same goes for the company's idea for using drones to patrol the border. What about collateral damage? Best, Don Bauder

The Predator could take out a narcotraficante while he's driving down the freeway alone. The hit would be clean and quick with no collateral damage. The Federales could put out a press release claiming the car was struck by a thunderbolt. Plausible deniability. No one would be the wiser.

Burwell: The military often claims that a hit is clean and quick with no collateral damage until we find out otherwise. Best, Don Bauder

depends on which end of the device you are on.

Murphyjunk: Amen. Some Afghans can attest to that. Best, Don Bauder

Don - I looked at her superpower arsenal (Wikipedia) and I think it fits. Justice league too.

shirleyberan: If the shoe fits, wear it. Best, Don Bauder

shirleyberan: Be sure it is a humanitarian one. Best, Don Bauder

If all drones were like dragonflies or pizza-size, they wouldn't seem so menacing and it wouldn't matter what they're called. As it is, they are aptly named.

monaghan: If drones were pizza-size, how many frisbees would be shot out of the air by representatives of the Pentagon? Best, Don Bauder

Maybe VWBug sized. Remember the Jettsons? Enough of this freeway traffic, and make it affordable. Not just for war anymore.

shirleyberan: Picture a society in which not only are all your phone calls, emails, and other social electronic messages recorded and stored by the government, but drones will be constantly flying over your home, patrolling your neighborhood.

Helicopters are patrolling and flying low over my neighborhood already, I'm not paranoid and I adapt, really don't see criminality on the mend. Probably will give gun enthusiasts an excuse to compete harder though. Won't that light up the sky.

shirleyberan: Maybe next year there will be a bowl game called the Snooper Bowl featuring helicopters vs. drones. Best, Don Bauder

viewer: You select your own limits. Best, Don Bauder

viewer - To things I know I have no control over, not just this government monitoring society electronically, but other governments can do it to, remotely or internally. I don't think there is or will be much privacy.

shirleyberan: On the subject of privacy, you certainly had no control. In fact, you had little if any knowledge about the activities until some courageous people brought it out in the open. Best, Don Bauder

A "drone" is an aircraft that's piloted remotely. That's it. It does not have to be armed with Hellfire missiles. Drones can be, are, and will be used for many things.

I swear, some of the people who are constantly crying about "drones" would ignore the exact same attack if it was carried out by a manned aircraft. UAV hits a terrorist camp, and it's "Oh God no, DRONES DRONES DRONES!" F/A-18 hits a terrorist camp… and nothing. And most of these "wedding parties" are terrorist meetings… the enemy knows to pretend to be something innocuous so that American liberals will cry when they're killed.

On channel 10 news at some point they said it, but could be either side lie.

shirleyberan: I just haven't heard that the Pentagon said that the wedding party was actually a secret meeting of terrorists. But perhaps I missed the statement. Best, Don Bauder