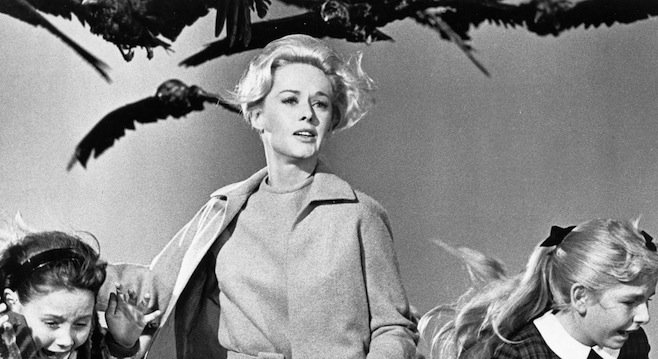 Actress Tippi Hedren, whose most famous role was in Alfred Hitchcock's The Birds in 1963, has won a $1.5 million case over a gallon of water that hit her on the head at San Diego's Stu Segall Productions studio in 2006. According to the Hollywood Reporter, Hedren, 83, had taken a role of a grandmother dying of cancer in a soap opera named Fashion House, which didn't last long.

She had suffered headaches for many years, but in 2006 had undergone spinal fusion surgery, which gave her relief. But the water falling on her head during rehearsal ended that. She tried acupuncture and all manner of cures but the headaches persisted. She hired an attorney, Joseph D. Allen of Santa Barbara, to sue the owner and lessee of the soundstage, but he made a mistake and dismissed the suit.

Oh, yes — according to the Reporter, the deluge was probably caused by a bird's nest that had blocked an air-conditioniing condensation tube.

So the facts of the case were never really resolved, but the alleged malpractice was worth 1.5 million.

Figures this is California you know... Where people wonder why EVERYTHING is so expensive...it's judgements and awards like this that cause it. Then we all pay for it one way or another.

JustWondering: No doubt. This judgment is open to criticism, justifiably. Best, Don Bauder

It's possible that the delayed effect of Hitchcock's tremendous girth is partly responsible for the back problems and headaches.

Burwell: Hitchcock had a fondness for blondes. That may be another explanation. Best, Don Bauder

For those, unlike Scott Marks, who do not follow movies, it should be noted that Hedren is Melanie Griffith's mother. Look at the photo above, and the resemblance is striking. (If you don't know about Melanie, just let it pass.)

Visduh: I don't know anything about Melanie Griffith and have never heard of her, to my recollection. Maybe others can comment. Best, Don Bauder

It's nice to see that for a change Ms. Hedren is making headlines for something other than disparaging Mr. Hitchcock. And don't forget Melanie's daughter who is slated to star in "50 Shades of Gray."

Scott Marks: I understand Hedren was a model whom Hitchcock rescued from obscurity and then taught her how to act. An ingrate, maybe? Best, Don Buader

And wasn't her character in The Birds named Melanie?

mridolf: I don't know the answer to that question, either, but believe it or not I did see the movie. Best, Don Bauder

Oh, Don! It's one of the Master's half-dozen best which automatically makes it one of the greatest of all time. It's as pointed an attack against American complacency as any filmed. Do yourself a favor and rent it tonight.

Scott Marks: I did see it, probably in 1963 when it came out. I agree it was a very good film. Another Hitchcock one I liked was "The Trouble with Harry." In the Army, I got a kick out of a book that was an assemblage of short stories that Hitchcock said "They would not let me do on TV." Best, Don Bauder

Scott is our "go to" guy for movie arcana.

Visduh: Indeed. He is a wonder. Best, Don Bauder

Scott Marks: Your memory is much better than mine. However, I will bet I am much older than you are. That's almost a certainty, because I am older than almost everybody. Best, Don Bauder

Older, yes. Much older? Not so much.

Scott Marks: Since I don't know how old you are, I can't comment. Best, Don Bauder

Why shouldn't she get compensation from attorney who botched her original lawsuit? Maybe it's excessive, maybe not. Living with pain is already hard in old age. My guess is you don't like her because she's beautiful. She has big cat wild animal rescue that takes a lot of money. Her daughter does what she wants too and was good back in the day - "Working Girl" the line that stuck was "I have a head for business and a bod for sin". No amount of money would compensate that poor girl for sex with Alfred.

Ah, yes, "Working Girl". The male lead was Harrison Ford, wasn't it? And the female protagonist was Sigourney Weaver. Or am I thinking of two movies at once?

Vidush is doing fine without me.

shirleyberan: She was gorgeous in the 1960s. Now she is in her 80s and still looks fetching. Did she have sex with Hitchcock, or was she just chased by him? Best, Don Bauder

Yeah, I think she worked for Sigorney's character but wasn't taken seriously, Sigorney/boss took credit for an idea of Melanie/insert name here, but in the end did impress Ford with showing her brainy work, not just new panties.

shirleyberan. When I was in grade school, I was in love with the actress Hedy Lamarr, but knew nothing about her. Now I read that she was a genius. Best, Don Bauder

Both women were interested in the very successful businessman Ford but Weaver did some of her straight faced comedy and eventually lost him to the new girl.

shirleyberan: Strange. I go for the comediennes. Best, Don Bauder

Who knows but the two if there was sex and why/why not. People assume she was easy because she would play up her looks? She had to look the part, it was Hollywood. And it's hard to get away from a sticky casting couch, so I've heard. You alluded to his reputation. She is still beautiful and so is Melanie, but Mel seems unafraid of surgery.

shirleyberan: Hitchcock had a reputation as a womanizer, so some people may assume wrongly that every female who starred in one of his films had to sleep with him. That's bad. Best, Don Bauder

shirleyberan: Remember that in Hollywood anything goes as long as it gets the actor or actress publicity. Best, Don Bauder

Hedy Lamarr was an inventor of some kind too. Have to look her up or just ask Scott.

shirleyberan: Yes, the story I read said that she was an inventor/genius. Best, Don Bauder

Maybe Hedren disparaged Hitchcock for the as of yet, not even in the dictionary, sexual harassment.

shirleyberan: She may have been talking about that before it became an easy way to collect a lot of money. Observe all the women lining up to sue Filner and/or the city. Those who arranged the Filner coup/lynching should have seen this coming. Goldsmith (and others), I am talking about you. Best, Don Bauder

It's going to be pretty damned ugly for the power elite if Alvarez is elected Mayor. They spent all that money to destroy Filner and wound up with something worse. Alvarez is going to want living wages for hotel workers and maybe even rent control. Alvarez is not going to want to give the stadium construction contract to the white union workers with the $60,000 a year jobs. A lot of mid level white managers in city government are going to hit the glass ceiling as Alvarez diversifies the city workforce and appoints minorities and females to executive positions. It's going to be worse at SDPD. Hell will be upon the power elite if Alvarez wins.

Burwell: You may well be right. And think what the lynching of Filner will wind up costing taxpayers. It will be some time before these lawsuits end. Note that one of the new suits has nothing to do with sexual harassment. Best, Don Bauder

Faulconer is trying to smear Alvarez. The charger ticket give-away, Mr. Self-Righteous is saying he doesn't do that for special interests like his opponent and Alvarez, not denying he has given away a majority of tickets, explained they went to disadvantaged kids and families who would never be able to afford attending a game otherwise. I'm sure that's true.

shirleyberan: Only one factor is relevant on the Chargers. Alvarez doesn't want taxpayers to ante up for their stadium. Faulconer -- who is in the downtown establishment's pocket -- does. That's all you need to know. Best, Don Bauder

shirleyberan: These are petty squabbles. Both should start talking about big issues. My bet is they won't. Best, Don Bauder

This should 'Tippi' Don's memory in the right direction. A pre-"Birds" ad for Gleem Toothpaste feature Ms. Hedren. 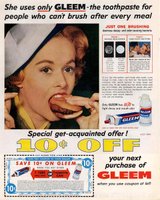 And here's the Tipster for Angel Face Cosmetics.

Scott Marks: Hitchcock is said to have seen ads such as these, and decided to make an actress of her. Good history. Best, Don Bauder

Might as well have made that burger a hot dog. Not flattering.

shirleyberan: I'm not sure a hot dog would have been more flattering. Best, Don Bauder

A thing of beauty is a joy for ever - Keats.

shirleyberan: If Keats would have said those words to a female today he would have wound up in jail. Best, Don Bauder