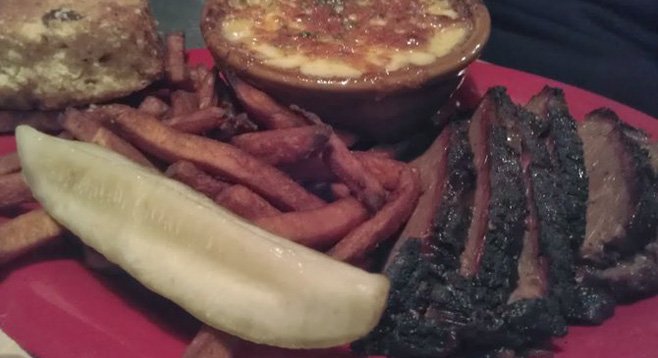 Hillcrest's barbecue of record shows what happens when 'cue gets way ahead of itself.

Barbecue has its roots in the humblest corners of the American South. The “low and slow” cooking method was developed as a way of increasing the palatability of tough, sinewy cuts of meat. ‘Cue isn’t alone in that. All over the world, resourceful populations of impoverished and working-class people have found ways to use it to make delicious meals out of the meats that the rich eschewed in favor of tenderloins and other naturally succulent cuts. But, just as coq au vin (a peasant’s dish if ever there was one) sits alongisde foie gras as emblematic of French cuisine, barbecue has moved out of the backwoods and into the mainstream. 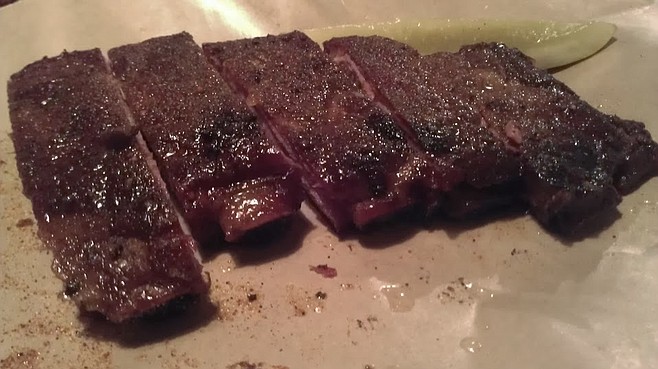 More than any other place in town, Brazen BBQ (441 Washington Street, Hillcrest) epitomizes barbecue cooking at its least proletarian. Not only does the restaurant offer (gasp!) table service, the menu has been kicked- and classed-up to the point that Brazen is a restaurant that just happens to sell barbecue. It could just as easily be a steakhouse, or farm-to-table experience. Look at some of the dishes on the menu:

SO not barbecue. Old-school pit masters would be justified in calling Brazen “highfalutin’” and nobody with a lick of sense would counter that.

Still, it’s kind of cool to be able to order a $2 “ambulance shot” whenever a siren blares past the restaurant headed to one of the nearby hospitals. The bartender will mix up something whimsical that utilizes whatever spirit the restau wants to promo — even if promo shots aren’t at all in the spirit of barbecue. 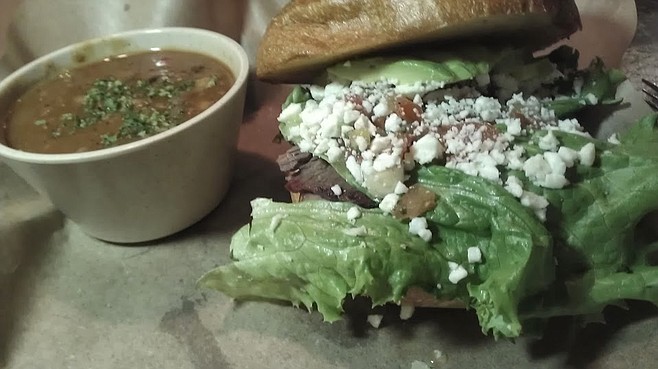 The Big B, BBQ-SoCal fusion at its most fused.

Here’s the twist: Brazen actually does a good job. Their huge smoker, modern and far slicker than the primitive contraption at a place like the Wrangler, imparts rich flavors to spareribs and brisket, though the greater control yields a more refined product lacking some of the character of an old-school open pit.

Still, dolled-up BBQ can be a delight. The “Big B” sandwich ($10.49), for one, smashes brisket, ham, lettuce, pice de gallo, queso fresco, avocado, and mayonnaise between the two halves of a brioche bun. Since the basic elements (i.e. the brisket) satisfy, the fancified sandwich ends up being delicious. Despite the fact that the “Lone Star pressed sandwich” says “a Texas take on a Cuban tradition” where it should say “Texan take,” the combination of smoked ham, pulled pork, pickled onions, and spicy mustard is just plain smart!

Despite the pleasant surprise of well-smoked meats, Brazen ends up carrying Jennifer Grey’s watermelon. Everything on the menu is just a little too spicy, and the sauce is too busy. It’s certainly more Kansas City than anything else, but instead of being a blend of clean vinegar and molasses sweetness, there are other things going on in the sauce, confusing the taste and adding too many flavors to meat that’s already seasoned with a very aggressive dry rub. But, then again, nobody puts Baby in the corner, and things turn out just hunky-dory for Brazen BBQ in the long run. They start with substance, and whatever’s built on that — however inauthentic — is better than expected.