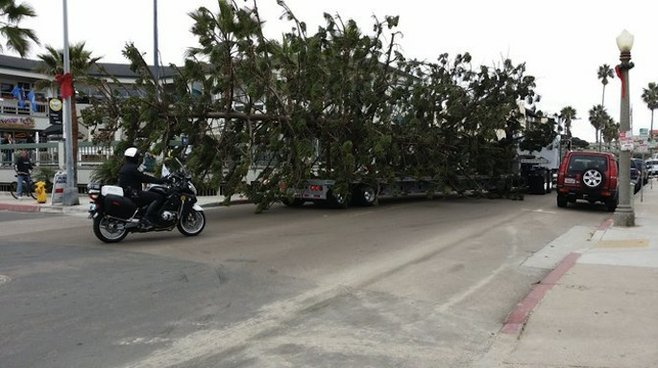 The O.B. Christmas tree has been a much-talked-about tradition for 34 years. If it looks perfect, people complain it's not O.B. enough. But when it gets partially destroyed, as it did several years ago at a freeway underpass, locals said it looked like a Charlie Brown tree.

This year's star pine started its five-block journey early on the morning of December 3.

Most years, the tree is donated by a resident who wants the tree removed. This one's roots were infiltrating the house it sat in front of. The owner gets the tree removed for free and the town gets a free tree. Otherwise, the whole operation can cost up to $6000, according to Claudia Jack of the OB MainStreet Association. 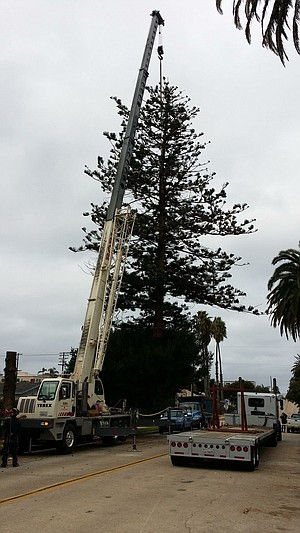 Jack said she has been organizing the cutting of the tree for 21 years. All the services — from the truck donated by R.D. Reed Transport, to Atlas Tree Service, to Diamond Environmental Fencing, to Hawthorne Rental's Larry Thayer (the project coordinator) — donated their time and equipment. The only charge was for Bob's Crane company, which was given at cost.

Starting before 7 a.m. at the private residence on Coronado Avenue, it was at least four hours until the tree was erected on the sand at the foot of Newport Avenue. It was escorted by several SDPD motorcycle officers.

I watched "Spiderman,” a nickname given to the guy who climbs the tree and cuts branches to make the tree transportable. He also attaches the crane to the top of the tree. Spectators gasped as he worked his way up the towering pine. More oohs and ahs were uttered as they watched the tree hang in the air and then lowered onto the flatbed. This part of the operation took over one and a half hours. 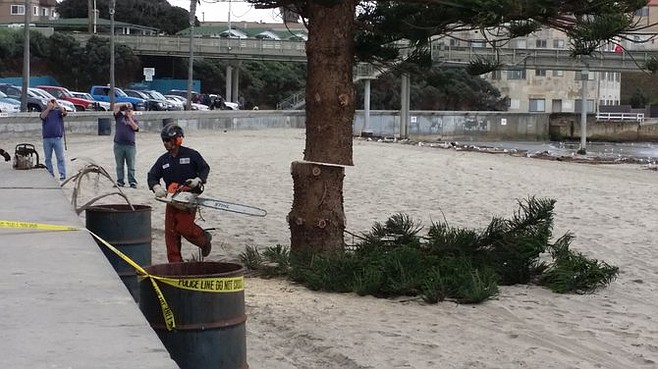 What started out as an 80-foot tree was cut down to about 65 feet before it was loaded. Once the tree was trucked down Abbott Street and arrived onto the sand, a "sleeve" to hold the tree — about 12 feet under the sand — was uncovered. But this tree was too big to fit into the sleeve and had to be trimmed again; another three to five feet were cut off at the base.

Once it was set up, it didn't look as full as when it sat in front of its home on Coronado Avenue. A true O.B. tree, for sure. Just in time for the O.B. Christmas parade on December 7.