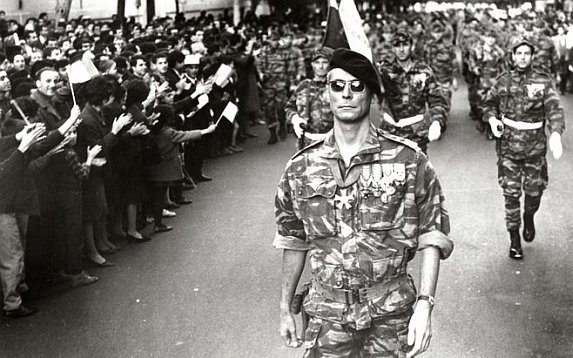 The Muslim Experience comes to the Central Library

A film series focused on presenting the history and diverse cultures of Muslims around the world is coming to downtown San Diego.

With its mix of documentary and narrative features, the series looks to raise awareness of the wide variety of experiences that make up Muslim life in the US and other areas.

The NEH-funded series has also granted the American Library Association free books, films, and other online resources to enhance libraries’ collections in hope of establishing future cultural programs for their communities.

In addition to her curatorial duties, Romani, adjunct professor of Film at Palomar College, OSHER instructor (SDSU), and one-time KPBS film critic (I know the feeling) will introduce each film and conduct the post-show Q&A.

Screenings start promptly at 6:30 pm. The Central Library is located at 330 Park Boulevard.

Few films are better at mixing documentary realism with narrative storytelling than the series’ opening presentation, Gillo Pontecorvo’s monumental The Battle of Algiers. What follows are Ms. Romani’s program notes.

The Muslims Are Coming! trailer

Who knew the Axis of Evil could be so funny? Acclaimed comedians Negin Farsad and Dean Obeidallah lead a group of Muslim-American standup comedians as they go on the road to counter Islamophobia using the only weapon they have: jokes. The Muslims Are Coming! follows these comics as they visit big cities, rural villages, and everything in between to do shows, meet locals, and counter the haters. Commentary from pop culture icons like the Daily Show's host Jon Stewart and correspondent Aasif Mandvi, Rachel Maddow, Janeane Garofalo, CNN's Soledad O'Brien, David Cross, and Lewis Black pepper the film as the comedians travel through middle America. Will they make a difference? Will they make it back?

Director Eyad Zahra will be in attendance after the film for a Q&A.

The Taqwacores is an intriguing look at little known phenomena, Musllim punk rockers- in this case Pakistani-Americans rocking out to the sound of punk guitars. Yusef, a first-generation Pakistani engineering student, moves off-campus with a group of Muslim punks in Buffalo, New York. His new "un-orthodox" housemates soon introduce him to Taqwacore -- a hardcore, Muslim punk rock scene that only exists out west. As the seasons change, Taqwacore influences the house more and more. The living room becomes a mosque during the day, while it continues to host punk parties at night. Ultimately, Yusef is influenced by Taqwacore too, as he begins to challenge his own faith and ideologies. The Taqwacores deals with the complexities of being young and Muslim in modern-day America.

Director Eyad Zahra will be in attendance after the film for a Q&A.

We are very pleased to bring Sabah, the first feature of one of the rising stars of Arab-American/Canadian cinema, independent director Ruba Nadda (Cairo Time, Inescapable). Little seen in the US, Sabah is a poignant story of Sabah is a 40-year-old single immigrant from Syria living in Toronto with her family, caring for her mother since her father’s death. Her niece, Souhaire, does not want her uncle Majid, Sabah’s brother, choosing her husband. A traditionalist, Majid has appointed himself the guardian for all the women of his family. For Sabah, this becomes a problem when she meets a non Muslim, Stephen, at a public pool and they start to see each other – something forbidden a Muslim woman. When Sabah finally tells her anxious family the truth, love, culture, family duty and the need for self-realization collide with surprising results.