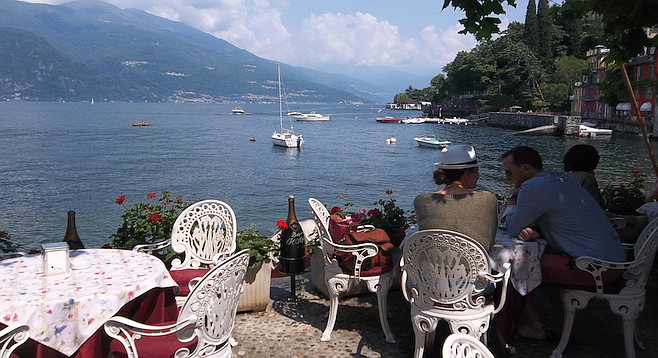 "Picturesque" is one word – among other superlatives – to sum up this lakefront town near the Swiss border.

Varenna is a stunning, yet underrated, jewel on Lake Como just north of the more well-known and widely visited Bellagio. If you’re looking for a tranquil atmosphere to accompany magnificent views of the lake, Varenna is your spot.

We headed out from Como on the southern tip of the lake and slowly meandered our way up to the center. Most of the tourists – many clearly from the U.S. – disembarked at either Villa Carlotta, the magnificent 17th-century lakeside villa with an extensive art collection and expansive gardens, or Bellagio, a popular resort on the lake dating back to Roman times.

Having bought a day ticket, I had plenty of options. I’d heard about Varenna, a town of about 800, and decided I would spend a few hours there before heading back to Bellagio. Ultimately, Bellagio never happened. Varenna stole my heart from the moment I landed and I knew it would be my only destination of the day.

After disembarking, I walked along the beautifully landscaped sidewalk, the passarella, lined with flowers (left), which meanders along the sea connecting the two harbors. As one strolls the passsarella, it’s possible to catch a glimpse of some of the many 19th-century villas that dot the edge of the lake. Varenna was popular with the European nobility during the 18th and 19th centuries and has a history dating back to Roman times.

It was difficult to choose from the tantalizing sidewalk cafés, each with a spectacular view. I settled on one overlooking the harbor and a tiny beach. Nobody here is in a hurry, and people linger with their drinks and lunches. What’s the rush?

Varenna isn’t just a spot for relaxing and staring out at the lake. There’s a castle, a church dating to the Middle Ages, and two villas with scintillating gardens open for visitors. There are no streets to speak of in Varenna. Between several of the buildings along the lake, there are lanes with steps called contrade that lead you up to these attractions and the heart of the town.

The Castello di Vezio, a medieval fortress surrounded by an olive grove, towers over the village; a worthwhile 20-minute hike will get you there. You can cross the drawbridge and climb to the top for some magnificent views of the lake.

The Chiesa di San Giorgio, built in the 14th century and lined with frescoes, is at the town plaza near the tourist office. A two-block walk from here takes you to the villas. Villa Monastero has beautiful botanic gardens suffused with sculptures, statues, vases, fountains and exotic plants – including cypresses, oleanders, citrus trees, agaves, and palm trees. In the 12th century, the location was the site of a Cistercian monastery in what seems the ideal location for spiritual reflection and contemplation. A house museum at Villa Monastero dates from the 17th century. Villa Cipressi, named after the cypress trees that line the grounds along the rocky coastline, has terraced landscapes leveling down to the water’s edge.

On the way back to the harbor, I stopped at Gelateria Riva, where the gelato is made fresh daily. I enjoyed what was perhaps the best gelato I had ever experienced in my life, the heavenly cherry-flavored amorena.

Despite its quiet atmosphere, opportunities abound for worthwhile activities in Varenna. There are trails in the mountains for cycling and hiking and opportunities locally to take cooking classes.

If you’re looking for an active nightlife, though, or opportunities for shopping, Bellagio might be a better bet for an overnight stay. While Varenna is better for relaxing on the lake, Bellagio is the island for shopping; it contains many more shops and hotels.

So if your plan for staying on the lake revolves more around people watching and shopping, the majority of your time is better spent on Bellagio. Wherever you stay on the lake, however, you can’t go wrong, as ferries appear frequently to provide island-hopping opportunities.

To get to Varenna, you can take a train directly from Milan or a ferry up the lake from Como.