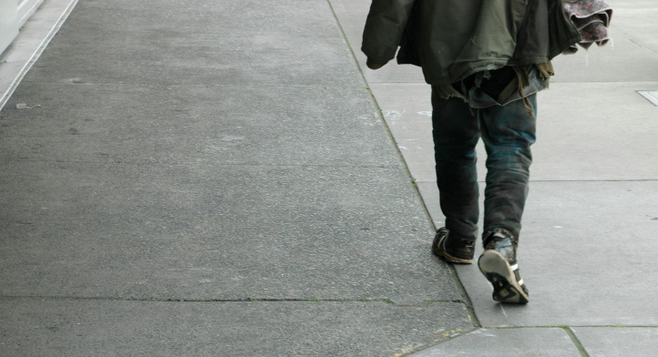 It all started when I was working for Freeway Insurance as a sales trainee in Clairemont. I was hired by my good friend Kevin, my former manager at American Graphics, where we sold promotional giveaways to medical and small businesses all across the country.

I started in October of 2011 and worked there until February of 2012. Everything was going great until I had to take the state insurance test. It was very difficult. If I passed that test, then I would become a licensed agent, but since I didn’t, they couldn't keep me on at minimum wage. I knew I was in trouble, as I had child support to pay and rent was due.

My landlord was a huge Georgia Bulldogs football fan, and every Saturday we would watch football from sun-up to sundown. He slept in the garage because he had rented out all the rooms in the house. I needed help! I went to my older brother Bruce who lives on Mt. Soledad Road with his new wife. They were kind enough to let me live with them for six months, so I could save enough to move out on my own.

My brother said, "I can't help you, you’re on your own!" I was hurt, but I did not give up. I then went to my loving girlfriend Darlene, aka “The Dar,” who had no way to help me with shelter because she lived with her aging parents. They are nice folks, but "old-school.” Darlene would drive out to see me on the weekends and we would go out to dinner, usually at a fast-food place.

She suggested that I stay with her sister Peggy and her husband Eddie, who lived in Vista. I thought it was too far away, but I didn't have a choice so I packed up my clothes in a big black garbage bag and waited for Darlene to pick me up.

I stayed with them for about a month and slept on a bed in their garage. I had nothing to do all day but watch TV with  their dogs — and, boy, were the dogs getting tired of me! I tried to get a job in Vista but there was nothing around and after about a month of their hospitality, food, and shelter, I had to find another place to live.

Darlene and I went to the employment office and found information about homeless shelters in the area. We found a very reasonable shelter called La Posada in the backcountry of Carlsbad. For a mere $20 a week, they provided a bed and three meals. Darlene cried when she dropped me off that first day, and I said to myself. Okay, I have landed in hell! I was right: there were some 50 beds in a military-style building and there was not a finkin’ thing to do.

They would wake you up every day at 4:30 a.m. to roll out of bed. It was impossible to sleep, and people were constantly getting up to go to the bathroom. The beds were terrible! They gave you a comfortless pillow and the lights were out at 9 p.m. They would kick your butt out at 6 a.m. and a lot of my "bedmates" would go off to their meaningless jobs.

I found a friend, though: Big Mike, who showed me the ropes. We would leave and ride the bus to the local libraries and hang out till dinnertime, around 5 p.m. We had to walk a mile or so up a steep hill in the summer's heat.

The food in the place was scarcely edible, and you had to beg for seconds. After dinner you could play volleyball with your fellow “bedmates” or putt on a small golf green that was about 20 years old. You could also go back to your bed and just lie there and be bored to death!

At that time, I was running out of money, so after about a month I decided to get the hell out of there. I figured I would take my chances that my "bro" would take me in just one more time. It was the end of June, and I packed up my belongings and pleaded with my girlfriend Darlene to come pick me up early in the morning. I must have waited three hours for her to come and get me.

She picked me up and said that they had to put Al the Wonder Dog to sleep and that my brother was very depressed. So, there I was, getting out of La Posada homeless shelter, my brother’s beloved dog dead, and my girlfriend Darlene not very happy with me but stlll sticking by my side.

HELLO: Fellow readers. This is the first time that I have ever written a story about anything as I wanted to tell my story because I did not put in this story but will in future stories about how it felt to be alone , hungry, not loved in a situation that I was in. I really want to hear your 'FEEDBACK" ON THIS . so please contact me 24/7 @ or & my celI E-mail...#619 715-7783. [email protected] Thanks for reading & god bless..JEFF FINKLE A.K.A.OO7.

Jeff, What you describee here so well was obviously extremely difficult for you. It goes without saying that the world can be a very cold and harsh place. The most important take away from your story for me is that you did not give up sir. A lesser or weaker person would have thrown in the towel. You did not. Consequently, your faith and perseverance won the day. Never forget that because you'll need them going forward and so will your Family, from you. For people like us, ALL THE WAY is the only way. Nothing worth having and keeping is free or comes easy and without sacrifice -- at least not for ~99% of us.
The only constructive criticism I'd like to give is this. it seems unfinished. If you agree, I suggest that you consider a part two that: * complements or expands this (e.g., the excluded feelings mentioned in your comment),

Thank you for publishing this. I found it, in one word, inspirational. DRIVE ON.

Great story Jeff !!! Keep us posted on your future endeavors !!!

Shiloh Snapp...Congratulations on your published story Jeff Finkle, thanks for sharing. One of my favorite movies is The Pursuit of Happiness. I met a Millionaire who used to be "homeless" and now owns a 18M Yacht with a hellipcopterpad!

Shiloh Snapp It seems like the story never got finished though. Hope you're doing better.

Shiloh Snapp You live in America the land of opportunity! Where there is a will there is a way!

I rarely post comments like this, but since you seem to invite constructive criticisms, I offer these.

We've all got life stories, Jeff. And yours has the makings of something that could reach the hearts of people all over this country. You need to go back to the "Why?" of how you came to write this in the first place. It didn't start with an insurance job in 2011.

This article sounded too much like every middle class person's daily struggle to put food on the table, deal with family issues, and pay the rent. Yours is a much more compelling story than that.

I've been following your FB posts, and this article doesn't even touch on the more interesting aspects of your story. You need to do a prequel, starting with the sponge hat invention in 1987. Maybe even go back to JDRHS days.

The article seems much more bland than the colorful picture you've been painting on social media. You don't want readers to finish the article and say, "So, what?" They need to know more about your quirkier side, the joy you've found in the crazy things you've done, the interesting characters you've met along the way, the things you've accomplished, and the personality you've built around yourself.

Start thinking with the end in mind, and ask yourself, "Can this be made into a movie? Will people actually be interested and pay to see it?" From what I've read, I think the answer could be, "Yes."

I think you should go into more detail about how you "work the system" finding all the great free (or cheap) events and deals that helped you get by. I imagine a "Steal This Book" meets "Private Parts" meets "The Night of the Seven Bonfires" (and other stories written in the 70's for the National Lampoon that eventually became the screenplay for "Animal House").

You should learn how to blog, or at least create a place where you can compile your thoughts and stories all in one place. Pretty sure you can set your blog posts to simultaneously post to FB.

Good luck on your writing career. You've always reached for the stars, Fink. Don't give up, and keep on posting. And if it ever makes it into a paperback or Kindle Book, I think you should set the type in ALL CAPS, just as you posted on FB. That's all a part of who you are, my friend.

I'm looking forward to the next installment of your saga.

Jeff, I have always appreciated you for your uniqueness and individuality. Although, I can't say I understand your day to day personal priorities. You are truly a kid at heart who shares personal thoughts that most adults don't have or choose to share with others. You live in the moment, without worry of tomorrow and have fun at San Diego events all the time regardless of your living, financial or employment status. Your story is bigger than coming back from being homeless. Most of Americans are just one pay check away from that. What I find magical about you is your ability to enjoy your life when everything around you is crumbling. Whether it is going to the parking lot before a San Diego Charger game without a car or a ticket, walk up to strangers, eat their BBQ, drink their beer, and they give you a free $125.00 ticket to the game. Or taking your last $10.00 to $.25 wing night and eat like a champ. Or going to summer Mansion parties. The list is endless. Just like the number of stories you could tell of all the great times you have had. All people are different and so many of us are so wrapped up in our realities we forget to live in the moment, forget to have fun, forget to share our feelings and forget that jobs, money, security and material possessions are all retainable. Our time to enjoy our lives and each other is finite. So, when I have a social event I am not excited about, I have a saying I use to put it in perspective. W.W.J.D. "What Would Jeff Do." It makes the decision to go have a good time easy. God Bless. Love You man. Kevin.

Jeff this is the start to a interesting story that I'd like to see what part two has instore ....