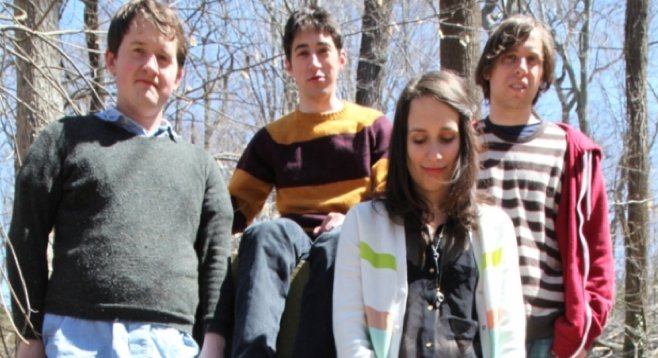 Actually, they're like at least one. A couple tunes into their guitar-glorious set, one fan loudly dubbed front woman Sadie Dupuis "Female Malkmus." No one objected. While her voice invokes Liz Phair or Aimee Mann, there's no questioning the influence of Pavement on her songwriting and musicianship.

A number of tracks from SO's debut full-length, Major Arcana, conjured memories of that ’90s alt-rock mainstay, as well as Olympia noise-rockers Unwound. Whether the elliptical melody of “Casper (1995)” or exquisitely angular riffs of “Pioneer Spine,” the songs energized the smallish but attentive crowd.

The best kept 'til last, though. While the music geeks in attendance had to practically drag Dupuis back onstage for an encore, they were rewarded with a smoking rendition of the group's must-listen Bandcamp single, “Ka-Prow!” during which the group's other lead guitarist Matt Robidoux unloaded the contents of his backpack onto his upturned instrument for a feedback jam assisted by no less than books, notebooks, and wadded up copies of San Diego alt-weeklies.

Great review, really well written. Wish I'd known about these guys before they came to town, but now having been turned onto them, I'm a fan and will make sure I'm there the next time they come through.