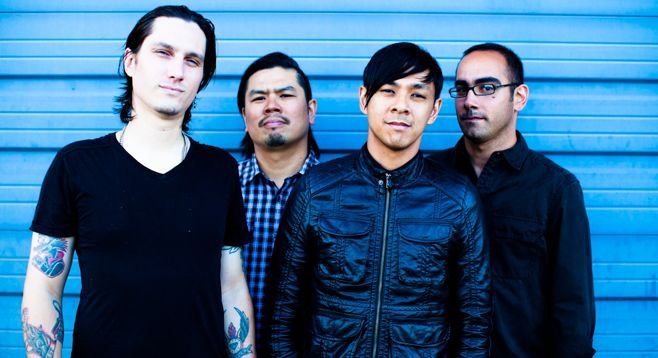 I Wish I ties the past with the present

‘During our time, we’ve gotten to play with great bands, from Swing Kids and Unbroken to Texas Is the Reason and the Promise Ring,” says drummer Gabe Gamboa of the recently reconstituted quartet I Wish I. “In the early days, we’d play Soma with Blink, pre-182, GBH, and Korn. Another great venue to play was the Pickle Patch in Santa Barbara, which ended up being the birthplace of Dim Mak Records.”

The original Fugazi-inspired lineup of Gamboa, Joey Guevara (vocals, guitar), June Cate (bass, vocals), and Jay Choy (guitar) were signed to Dim Mak when their last record was released in 1997, after which Gamboa played with Kill Holiday, Guevara joined JeJune, Choy focused on martial arts and running his Ebisu Sushi restaurant and bar in Hillcrest, and Cate became a pro skater and then worked for a well-known coffee chain (“I went from grinding rails to grinding coffee”). Over the lengthy hiatus, I Wish I played only a handful of shows between 1997 and this year.

The reunited foursome has signed up with Dim Mak again for their new full-length, Convolutions, recorded at Earthling Studios by Mike Kamoo and set to drop with a release party at the Soda Bar on April 23. “The album cover art is a painting from Nilo Naghdi,” says Guevara. “She’s actually the artist that designed our logo back when we first started in 1994. It was special for us to have her painting on our new release, since it ties in our past with our present.”

Cate: “I’m a mellow drunk. I did pee walking once, on my way home from Nunu’s in Hillcrest.”

Guevara: “Wrecked my life, not so funny. Now I party with monster java and mango suckers.”

Choy: “Can’t remember when, where, or what happened, but I bet it was awesome.”

Cate: “Lolita’s for the best bean, cheese, and guacamole burrito.”

Guevara: “I was a vendor at SeaWorld for awhile, and that fully sucked. One time at Shamu Stadium, I forgot to get out of the way and Shamu spit water all over a fresh tray of popcorn, and I had to pay for it. Whale bastard.”

Gamboa: “Working in a plastic printing company, I had to pull apart the credit cards from the machine and each time it would shock me. I probably got shocked about 12 times a day.”

Outtakes: MOST PAINFUL FAIL? Cate: “Just tons of sprained ankles and shinners from my skateboard.” Guevara: “While waterskiing, my dad broke his shoulder when he tried to ski onto the sand too fast and flew out of his skis. I bet that looked pretty funny.”

WHAT WOULD YOU DO WITH A MILLION DOLLARS? Cate: “Save, invest, pay off the whip.” Guevara: “Buy a building downtown and throw a non-stop party for a year.” Choy: “Try not to spend it all.”

BEST ADVICE? Cate: “My friend Rock told me to slow down on my backswing. My golf game sucks.” Guevara: “From Motorhead, ‘Eat the Rich.’” Gamboa: “One of my bosses in retail once told me about the five-P rule: Proper Planning Prevents Poor Performance.”

BIGGEST POLITICAL CONCERN? Guevara: “I’m afraid people have succumbed to the worst form of mind control. They’ve been made to feel ineffectual, having the last two Presidential elections rigged and feeling powerless against their nation being thrown into war. It has us all feeling like the people don’t make decisions in this country anymore.” Choy: “Troop pullout. Who’s footing that bill, and who’s protecting us?”