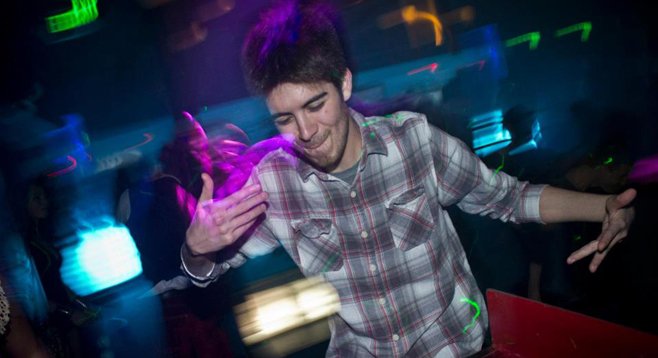 4th&B may reopen as an electronic dance music nightclub

The 4th&B concert hall was forced to close in December following the eviction of business owners Vince and Judy Puma. The Pumas were hit by lawsuits from building owner Crown Investments and former owner Ali Nilforushan over nonpayment of rent and other alleged financial obligations.

All of 4th&B’s sound equipment and other fixtures were sold at auction last month. No official word has been released on whether the space that housed the 4th&B nightspot would reopen as a music venue or as some kind of retail or office complex. Twenty years ago it was a bank.

The outside marquee on B Street reads, “Redefining awesome.”

Word has it that longtime local electronic dance-music impresario David Dean has signed a lease on the 25,000-square-foot, 1500-person-capacity venue. Insiders say the new venue will be equipped with a state-of-the-art sound system and that the interior will be completely remodeled.

Under Dean, it is assumed that the new 4th&B will primarily be known as a mecca for electronic dance music (EDM).

Dean was connected for many years with Spin Nightclub on Hancock Street. He has presented events at Spin as well as in Las Vegas and Los Angeles. He could not be reached for comment.

A spokesman for California’s Department of Alcoholic Beverage Control says the alcohol license has not yet been transferred.

Dean and his group would face a daunting task, as EDM already thrives at downtown clubs such as Spin, Fluxx, and Voyeur.

But, one local EDM promoter thinks it could work as a dance palace, despite the cost and stiff competition. “EDM is not going anywhere anytime soon,” says Luis Martinez of Audio Impact Entertainment. “Some elements aren’t as popular as they were a few years ago, like dubstep, but new genres keep popping up, like trap (techno rap). It keeps evolving.... Everyone is used to huge festivals with a lot of bass. This genre is so bass-driven. If they can get ample sound to fill that huge room, that place could definitely go off. That place has great parking and it’s easy to get to.”