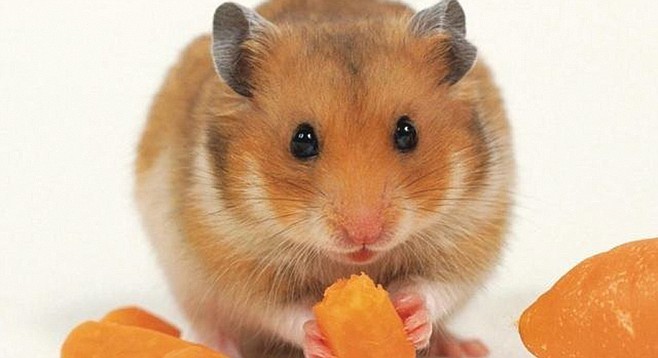 Hamster is a better idea than hamsters

The pet debate raged on in the Kelly home. On one side are the kids who ask for a dog every time they see one in a commercial. On the other side is my husband Patrick who resents having been, as he says, the sole caretaker of the one dog we owned, Nellie the miniature schnauzer. Before the two sides took up arms against each other, I suggested we look into the possibility of owning hamsters.

The first thing I found out is that hamster (singular) was a better idea than hamsters. “Hamsters are loners. If you get more than one, you need to get them at the same time,” explained David, one of the owners of North Park’s Animal House Pet Store (619-295-8834; sdanimalhouse.com). “If you buy one and wait several months and then buy another, you could have problems.

As far as cages are concerned, “If you get the smaller hamster, you need to make sure the bars on the cage are real close together so they can’t escape. Cages run from $24.99 to $100,” depending on the size and style.

“They eat hamster food, a kibble all the way to a grain cereal that looks like a trail mix. Hamsters are like a pack rat, but the amount of food they eat is small, compared to a rabbit,” he added.

“We sell the Syrian hamsters,” explained Lauren from Pet Kingdom in Point Loma (619-224-2841; petkingdom.com). “They come in all kinds of colors, black-and-white, tan; some have long hair, as long as two inches. They are one of the bigger breeds [$12.99]. You can get away with a smaller hamster cage because they don’t move around as much as some of the smaller hamsters. The cage, which comes with the wheel and water bottle, runs $29.99.”

Lauren echoed David’s warning. “Most of the time, they are not very social animals. So it is best to have just one.”

“Hamsters can live about two to three years,” she continued. “They can be social animals and they definitely can do well with people handling them. But it’s best if you socialize them when they are young and you do it often. They can scratch or nip you.

“You can use different types of bedding,” she said. “We have CareFresh Pet Bedding [$21.98 for 60 liters], and that is a recycled newspaper that has been processed and all the dye has been taken out. We don’t particularly recommend wood shavings because a lot of them have aromatic oils that can cause respiratory problems. Make sure you are changing the bedding about once a week or as needed.

“You also need to provide chews for them, because their teeth never stop growing,” she added. “Otherwise they get bored and start chewing on their cage. We sell all different types of chews, from wood chews to grassy chews.”

When I headed in a week later, the saleslady pointed out to me the Farmers Market Seagrass Spirals natural sun-dried grass snacks ($2.48). “They can carry these around in their mouth, carry them to the corner of their cage and sit and chew.”

She also offered a caution with hamster food. “Kahoots sells their own Garden Blend Hamster Food [$5.98 for two pounds], which is really good. Some of the brands put sweet bits in their food and the hamster will only eat the sweet stuff.”