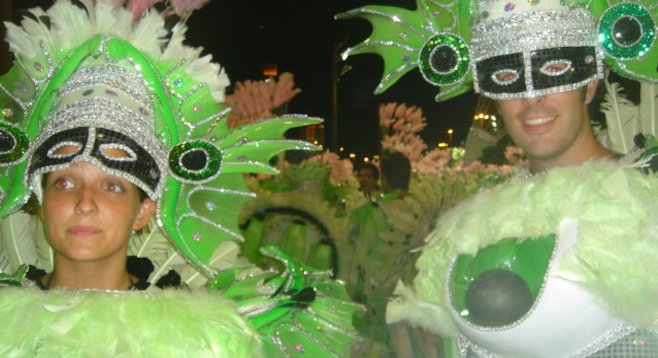 My head was pounding. Fireworks crackled overhead. Hordes jeered, screamed, waved and then broke into joyous whirls of samba. The smell was unbearable, an open sewer ran beside our Sambódromo warm-up lane, and yet thousands of people were crammed alongside the channel of feces just to catch a glimpse of all of us.

And what was I listening to – not the rhythms of the Mangueira samba school, but an anglophile Frenchman chatting listlessly about his adoration for the traditional English breakfast. 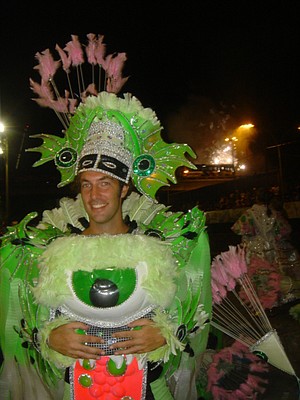 The author in costume.

Stern-faced officials dressed as monks checked our lines and made sure our costumes met the Mangueira requirments as they marked off each bloco as ready to go.

Massive green eyeball on my chest with wart-ridden tongue hanging down in place, check. Green-and-white ribbons and streamers attached to the coathanger fixed to my back, simulated waterfall in place, check. Silver sandals appropriately fastened, check. Mask in place, check. Our section was good to go.

And yet the Frenchman could not stop. He talked of baked beans, mushrooms, his habit of overlooking the black pudding, and here we were, dressed as Negro D'água ("black man of the water"), a supernatural being who lived in the waters of the Paranã River.

How many people were here? Nothing prepares you for that last corner as you turn in, behind the extravagant themed floats. Fiberglass Amazon tribesmen 30 feet tall, polystyrene stallions cascading from the sides of painstakingly fashioned vehicles. When they say Brazilians live and work the year round for Carnaval, they are not mistaken.

Then, there it is, a stretch of almost a kilometer in which we are supposed to – indeed, have been ordered to – samba as if our lives depended on it. To the left and to the right nearly 70,000 people rise up in the stands, crammed into Oscar Niemeyer's Sambódromo parade stadium.

At the front, the master of ceremonies and the flag bearers, then the Baianas (ala de baianas), including over one hundred older Afro-Brazilian women. The bateria drum section consisting of a few hundred men playing a variety of raucous drums, tambourines, and rattles. And then us, in the opulent float section, representing a legendary half-man half-fish creature rumored to fight against the fishermen who dare to invade his space of this great Parana River.

I felt I owed it to this crowd to give it my all. They had come here to witness a spectacle. Regardless of my samba skills, I would shake my body, swing myself around and make this a parade to remember. At the same time, I had my eye on the gap in front. To hell with the monks and their rule – I needed to be free of the English breakfast chat.

After all, where was I? In a greasy spoon in West London, or at the very heart of the Rio de Janeiro Carnaval, honored to be here with one of the oldest and most traditional samba schools, Mangueira?

Elbows out, swishing my waterfall and spinning in an attempt to samba, I freed myself and moved over to the right-hand side where the rich and famous habitually party. Scanning the exclusive bleachers did not yield any famous faces to me. Admittedly, I was looking for two in particular, football god Pelé and the delectable Giselle. Arnold Schwarzenegger was a guest one year, but alas, he was not to be seen either, perhaps too busy in California. There was even no Venezuelan President Hugo Chavez, who seemed a dead cert given his taste for stirring things up and having donated through the Venezuelan State Oil company (PDVSA) anywhere between a reported half a million and a million dollars to Vila Isabel’s effort titled “I’m Mad About You, America!”

Politics aside, the crowds of dancers moved tidally, swaying sweaty costumed bodies in the direction of the finishing line. It had become more of a fight than a dance. My costume was battered, nothing remained of my streamers, my mask had been knocked off by a stray arm attached to a women mid-pirouette. But, as we were in Brazil, the smiles remained and the party atmosphere continued, despite the fact that this was a competition. 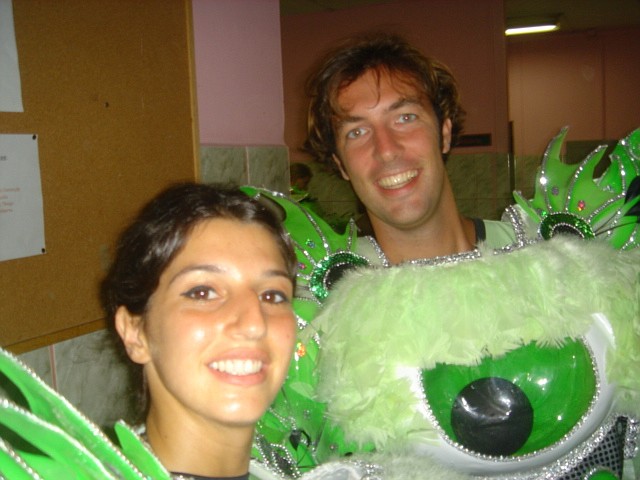 And then, some 45 minutes later, it was over, and we found ourselves back on the metro heading home in full kitsch regalia, prompting the curiosity of one American tourist.

“What are you guys?” 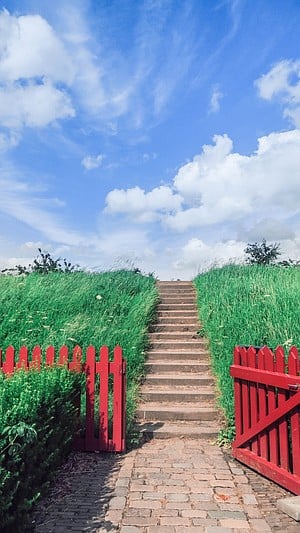