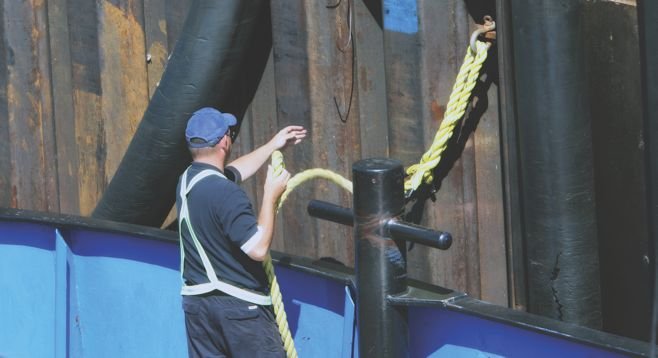 Workin’ on the Dock of the Bay, Not Wastin’ Time

Reggie Vaughn explains the ups and downs of semi-skilled trade work for intellectuals.

First, tell me what you do.

I work on aircraft carriers, doing maintenance and service work. I’m not supposed to go into much detail beyond that.

How did you come into this line of work?

I was a Class A truck driver for ten years. I had a really good job with a national freight carrier, but when the economy slowed down, I got laid off. One day, I was in the unemployment office on University Avenue, and I saw a flyer advertising an apprenticeship with the federal government. I thought it was a joke or a scam at first. When you’re unemployed, it’s a little hard to believe that someone will pay you to go to school and learn a trade. But one thing about being unemployed is you have time to follow all leads, even if you don’t completely believe in them. I applied, jumped through all the hoops, and eventually got hired.

Like I said, I worked for a national freight company - that was a union job. I had a really good hourly wage, incredible benefits, and (I thought) job security. I guess no one counted on the economy going as bad as it did. I worked there for four years, before that I worked at a couple different trucking companies, both were really good, smaller outfits. I left those because of life circumstances, not because I got fired or didn’t like working there or whatever.

Before that, I was a music journalist, believe it or not. I did that for a year and only made $12,000. That’s actually a good start for that line of work, but I was used to living a nice, middle-class lifestyle, and I didn’t adjust my spending to match my income. That’s when I got into truck driving. I needed a skill that would pay good money and wasn’t too complicated. Before the writing thing, I was in the music business. I was a sales rep. for Warner Bros, I managed a record store, etc. Everything was music-related until the truck driving.

So, for the past decade, you’ve had a string of manual labor jobs, even though it’s clearly not your only option. I would venture to guess that’s not a common choice. What are some of the benefits you’ve found that others might not realize?

Well...I wouldn’t call it manual labor. That’s more like landscaping or entry-level construction or something like that. I’d call it semi-skilled labor - the difference is it’s trade work. Which means you have to have a certificate or license to do it.

The meaningful difference is money. In trucking or in the job I’m in now, which is pipefitting, you can make as much as some professionals. Some of the other benefits are leaving the job at work. When I was a sales rep, I was a sales rep practically 24/7. The perks were great, of course, but I was never really off. Since I started driving trucks and now with the pipefitting, when I’m off, I’m off. I don’t think about the job at all when I’m not at work.

Also, when you work a white-collar job, you usually don’t get overtime pay. OT is a big deal - some guys practically double their paychecks that way. Another benefit is the camaraderie at work. The majority of guys I work with are really laid back, hard-working people. They just want to put food on the table for their families and kick back with a few beers on the weekend. I find the working atmosphere more comfortable than it was when I was always trying to make a professional impression. Now, I don’t have to. I just show up and work.

And what are some of the challenges for you?

The biggest challenge for me is that I’m not good with my eyes. I’m a real cerebral person. My natural talents are writing, talking, and reading - stuff like that. Most of the guys I work with work on their own cars, install their own appliances, do their own plumbing work...stuff like that. If I tried any of that, I’d destroy my house. So while they’re picking up things really easily, I’m struggling with the basics. Sometimes at work, I still have to say ‘righty-tighty/lefty-loosie’ in my head just to remove a bolt. It’s embarrassing sometimes. Of course, it helps for the school part of my job. I get straight A’s in the classroom. The hands-on stuff is hard for me though.

What are your plans for the future? Is your current line of work one you’d like to stay in through retirement? Or do you have something else in mind?

In the future, I hope to split the difference, so to speak. I want to stay in the general field that I’m in, but get into engineering or management or something like that. One negative to a labor job is the physical danger and how hard it can be on your body. The shipyard really emphasizes safety, but it’s still a shipyard. People get hurt all the time. Even killed. Not enough to make it frightening on a day-to-day basis, but enough that you never really forget about it either. As I get older, I wouldn’t mind getting an engineering degree and a desk job. Hopefully, I can swing that while maintaining my current job. I’m not trying to leave the federal government!

What kind of advice would you give to someone thinking about going into a skilled labor trade for the first time? What should they know about themselves and/or the nature of working as a skilled laborer?

Advice? Well, if they’re coming from a white-collar background, just be ready to get dirty, and don’t be surprised if your boss treats you less pleasantly than you’re used to. In labor jobs, the boss doesn’t usually ‘ask’ you or ‘chat’ with you or ‘meet’ with you - they just assign the job and expect it to get done. Also, it can be a grind, mentally and physically if you’re not used to it. But if you get the right job, the pay is good, the benefits are decent and, as long as you’re a laid-back ‘guy’s guy’ kind of person, the atmosphere is ok too. If you’re more formal or persnickety I wouldn’t recommend it. And we do have some women in the shipyard, but I don’t know how they do it. Even though the shipyard goes way, way out of their way to talk about sexual harassment and EEO and all that, it’s not what I would call a female-friendly environment. Some women seem to do fine though — I guess it all depends on the individual.