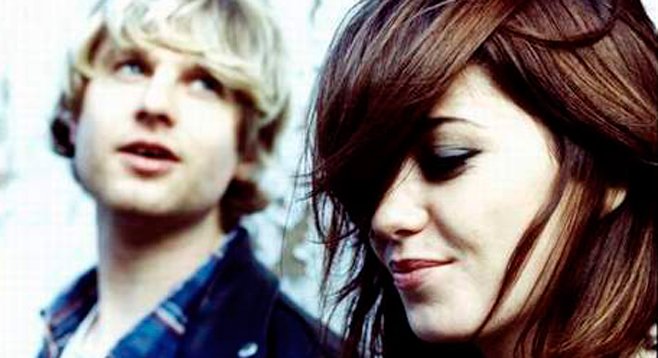 Aimee Mann, meet Cold War Kids. Blood Red Shoes, yet another drum-and-guitar rock duo sound as if tutored by both L.A. artists. They were not. They are, in fact, a British band. Laura-Mary Carter and Steven Ansell started playing together in 2004 after other attempts at bands fizzled. But, aside from the economics of it, I don’t fancy the rock duo. In the late 1960s, Cream showed us the bare minimum: guitar, bass, drums. The duo is a hackneyed idea shamelessly imitated by dozens of emerging rockers who have followed in the footsteps of that most overrated of all duets, the White Stripes. Jack and Meg propelled themselves into the pop stratosphere only to learn the hard way that they were a gimmicky band with plodding drums and a frenetic guitarist who sang funny. As a band, Blood Red Shoes doesn’t go there, meaning, they don’t reinvent. Instead, they take straight-ahead song quotes from Blondie to the Pixies and everybody in between and rework them into their own little sonic blasts.

The band name Blood Red Shoes is in apparent reference to a story from back in the days of Fred Astaire and Ginger Rogers, a pair of Hollywood dance stars that appeared in movies of the ’30s and ’40s. According to the story, Ginger Rogers danced so hard once as to bloody her white shoes. True story or not, one gets a sense of a similar overworked approach to BRS, too, although a good deal of overplaying has got to be chalked up to the fact that there are only the two of them to carry things out. Unlike the Stripes, in this band the man is the drummer and the woman fronts on guitars. They trade off doing vocals. They are loud, festival-pleasing musicians, and with their hot, runway-model good looks they can draw a listener into enjoying the experience.