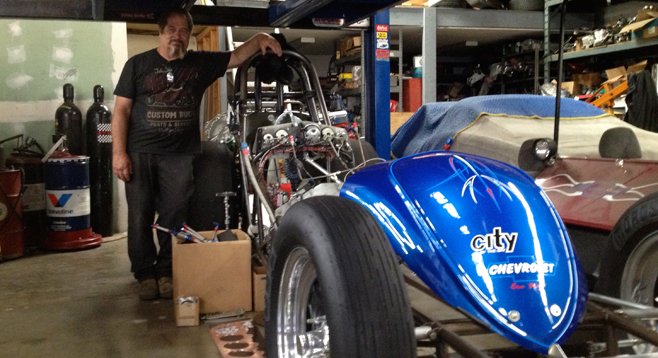 How’s your commute?
I live about a half hour away from the shop. I actually like my commute; it gives me time to unwind before I get home and a sense of preparedness on my way to work.

What do you listen to when you drive?
I like R&B. Sometimes I listen to some very relaxing instrumental CDs that have no words — just nice music. It gives me a sense of peacefulness.

What’s your favorite thing about your car?
That it’s fast!

What’s wrong with your car?
Right now we are building a new engine for it, so we can go faster. There’s always a need for speed!

What’s the coolest car you’ve ever driven?
That’s a hard one; I get to drive a lot of cool cars! My customers will often bring their cars in for an oil change and leave them when they go out of town: they want to leave it somewhere safe where their wife or their son won’t take it out on a drive. Perhaps not the coolest, but the most unique car I’ve ever driven is a Fairthorpe. It’s a little import kit car with an MG drive train; they’re very, very rare.

Do you use your cell phone when you drive?
No.

Tickets?
I have no tickets. I’ve been over 200 miles per hour on a public highway, and I’ve never gotten a ticket — it’s very fortunate.

How about accidents?
I have a funny accident story. I was on the 805 and the traffic was stopped. The woman behind me was driving with her knee — she had the phone in one hand and she was putting her makeup on in the mirror — and she slammed into the back of my truck. When she got out of her car, she didn’t even notice her lipstick was all up the side of her face. I couldn’t help but laugh when I got out.

I looked at her and I said, “What happened?”

“I guess I wasn’t paying attention,” she said.

“At least you’re honest. It looks like you were trying to put on makeup.” She was really embarrassed.

Where’s the worst traffic in San Diego?
The worst San Diego traffic is when someone stops to change their tire on the side of the freeway when I’m on my way to work and everyone starts rubbernecking. Any little distraction creates havoc on the freeway. San Diego traffic is really bad anyway in the morning and in the afternoon, so I try to either work late or leave before the traffic gets really bad. Normally, I work late.

What’s your driving pet-peeve?
Rubberneckers and women putting on make-up when they drive.

What’s your favorite driving shortcut?
When the traffic is really backed up, I just take the off-ramps all the way down until the last moment. There’s really nothing the police can do. It’s not illegal — as long as you don’t speed on the off-ramps, it’s not illegal. It’s just convenient.

What’s your favorite life shortcut?
When I was young, I was hoping to retire by the age of 45. I’m 57 and I’m still working, but I’m doing something that I really like, so even though I’m not a millionaire, I enjoy coming to work every day. In this specialty Corvette and performance business, no two days are alike: there’s always something new going on.

What’s your dream car?
A ‘67 Corvette convertible four-speed with a big block: black on black.