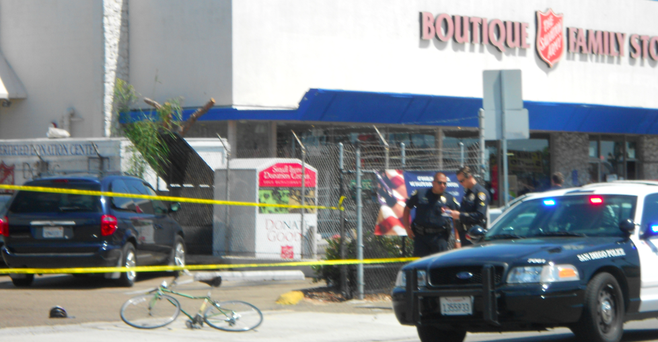 Bicyclist Run Over in Midway District

On September 7 at around noon, a man riding a bicycle was hit and run over by a delivery truck in the Dixieline Lumber driveway at 3250 Sports Arena Boulevard.

Police responded by blocking off the Dixieline driveway as well as the Salvation Army store parking lot next door.

The charity's donation attendant who witnessed the scene, Geno, told me that the man who was struck looked to be "about 60 years old and was unconscious when the ambulance arrived." Geno also noted the bike rider's leg was totally "mangled up" and it "looked like the white box truck's wheels had run over the man."

The female truck delivery driver was shaken up. After the severely injured man was rushed to the hospital, his smashed bike was left on the sidewalk next to his discarded helmet.