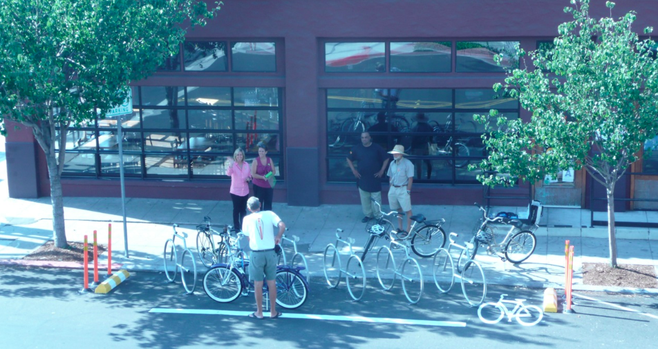 Now there is even more convenient parking for cyclists near North Park's Ray Street Art District; a new “bicycle corral" has been installed at the southwest corner of 30th Street and North Park Way, next to the Linkery.

This is the second corral that has been installed in Mid City; the first one was installed in Hillcrest earlier this year.

Maybe NP will help the City of SD do something like this: BMW Guggenheim Lab Create ‘Dynamic Connections’: A Crowd-Sourced Cycle Map for Berlin Cyclists

snip The problem with cycling in a big city is that many maps are outdated, and certain routes aren’t exactly ‘cyclist-safe’. With this in mind, BMW Guggenheim Lab and Lab City Project have created ‘Dynamic Connections’ – a crowd-sourced bike map of information for cyclists in Berlin. The map was created for German cyclists in order to “enable cyclists to mark the routes they frequently ride on a Google-based map”. Users are also able to answer a number of questions about that route regarding traffic flow, number of parked cars, visibility, topography, and the density of amenities along the route.

Ciclovia: Bogotá, Colombia by Clarence Eckerson, Jr. on December 1, 2007 | 201,437 Plays SNIP: Recently, I had the opportunity to travel with comrades Karla Quintero (Transportation Alternatives) and Aaron Naparstek (Streetsblog) to Bogotá, Colombia to document some of the amazing advances going on in the livable streets movement there. On Sunday we spent the entire day - from 5 AM 'til nearly 5 PM - riding bicycles around the city courtesy of the Ciclovia, a weekly event in which over 70 miles of city streets are closed to traffic where residents come out to walk, bike, run, skate, recreate, picnic, and talk with family, neighbors & strangers...it is simply one of the most moving experiences I have had in my entire life.

This should be easy to do in SD! http://www.streetfilms.org/ciclovia/