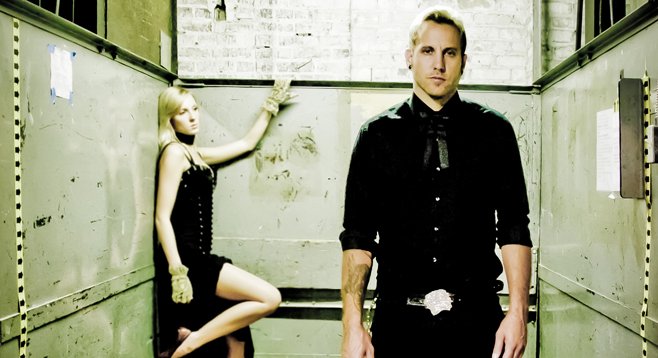 The way Tim Lowman tells the story, it is not surprising to learn that his one-man act Low Volts may have been shaped in part by his great grandfather Doc Lowman (he was a gospel singer who wrote a book about how he escaped the electric chair), juvenile delinquency, and the guitar of Tony Iommi. “By the time my senior year in high school came around,” Lowman says, “I was getting into a lot of trouble.” Born and raised in Los Angeles, he says his mother sent him to live with his dad in Boulder, Colorado. “That was one of the best things that ever happened to me. I ended up meeting a friend who eventually taught me to play ‘Iron Man,’ by Black Sabbath. I haven’t put the guitar down since.”

Low Volts’ first full-length record is due for release on December 11 with a record-release party at the Casbah that falls on the end of the Mayan calendar: 12/21/12.

To this day, you tune your guitars Sabbath-like, meaning way low. What is it about that sound that appeals to your inner composer?

“With that low, open tuning, I can emulate bass, rhythm, and lead at the same time. The lowest string is tuned to C#. I have to change strings after every show, and the frets get destroyed due to excessive vibration, but it’s worth it to me for that swampy tone.”

How did Low Volts come about?

“There was a point when my last band decided to go on hiatus and I had no one to play with. Eventually, I just started playing these heavy, dirty riffs by myself using a glass slide. I had a dusty old kick drum set up in the corner of my room, and I would keep time with that and just jam for hours. So, basically, Low Volts was born out of necessity.”

Somehow, that all translated to the stage...

“Those riffs evolved into actual songs. I would record them just so I wouldn’t forget them. But instead of multitracking, I put one microphone in the room and recorded the kick drum, vocals, and guitar live to save time. On playback, it sounded like three or four musicians. No one believed it was just me playing everything all at once.”

The challenges of being a one-man band?

“I actually loathe the term ‘one-man band’ because it brings to mind the weirdo in the town square with kazoos in his ears and cymbals between his knees. I think Low Volts is something you have to witness live to understand.”

Working alone seems like an uphill battle...No one to fall back on.

“There’s something about the crash-and-burn element that really makes it exciting for me and, in turn, the audience. When everything is mic’d properly, there’s nothing stopping me from playing tiny bars to arena-sized venues. I always tell the sound guy that the force of the kick drum needs to crack sternums.”

Any overdubs in the studio?

“On my debut record, the only overdubs were some chains and tambourines, which I have girls play at live shows.”

“[Record producer] Mike Butler and I thought it would be cool to add some ghostly elements to the record, like chains and other junkyard-type sounds. I need to be able to pull the songs off live, so I keep it really raw with minimal overdubs. People love seeing the Hi-Watts [Lowman’s name for his unofficial backing shakers] come up on a few songs and bang chains to the rhythm.”

I get a sense that hot rod culture is important to you and to your music.

“I think a better term for me is ‘kustom kulture.’ Harleys and old cars have been a part of my life since birth. I have the same philosophy with cars and bikes as I do with music: I don’t polish my motorcycle because I want it to shine; I polish it so it doesn’t corrode. I want it to last forever, but still retain the filth and battle scars that define a great journey.”

“I definitely treat my gear better than most humans. Most of my gear is very rare or customized.”

“I pinstripe my guitars and paint my amps to create something different than what the masses have. I even have an old chrome hood ornament on my kick drum.”

You’ve said Low Volts is self-financed. What could you do with a bigger budget?

“If I were given millions of dollars to make the debut Low Volts record, I guarantee it wouldn’t sound as authentic, passionate, and timeless as the record I made with money from my own shallow pockets, some practice, and a little help from my friends.” ■