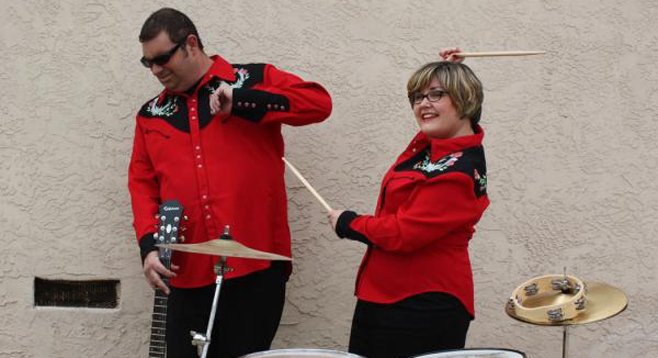 ‘We perform musical comedy inspired by burlesque, vaudeville, and punk rock,” says Jaye MacAskill, who cofounded Pony Death Ride with her husband Joe in 2009. “As a multi-instrumental duo, our songs reference a variety of music genres, from classic American songbook–style to pop, country, electro, metal, and even children’s lullabies. Though our lyrics touch on various inappropriate adult-oriented themes.”

Jaye (formerly of the Daffodils and Nautical Disaster) cites a few of their inspirations. “I’m from Canada, so most of my influences are funny underground Canadian bands from the 1980s, like the Dick Van Dykes, Deja Voodoo, the Gruesomes, and the Flunkees, a sleazy punk Monkees cover band from Vancouver. I like the subversive stuff, so the more commercial novelty-type artists like Weird Al have never done much for me. Plus, I could never get over Weird Al’s hair. I just don’t like it.”

As for Joe (ex–Trophy Wife and Skunk Drunk), “I’ve been friends with Steve Poltz and a fan of Mojo Nixon for a long time, [and] my last two bands had the same mindset as those two musicians. I used to listen to KGB’s Homegrown albums, and one song called ‘Chula Vista,’ which is where I’m from, got me interested in this type of comedy-driven music. ‘King Tut,’ by Steve Martin, was also one of the first funny songs that I liked as a kid.”

Pony Death Ride’s debut full-length (Not a Foal, Not Yet a Horse) is slated for release on December 11. The CD-release party is at Bar Pink on Tuesday, January 15.

IF YOU COULD READ MINDS?

Jaye: “I’d have a long conversation with our cats.”

Joe: “Find out why everyone hates me.”

Jaye: “When I was working at a store in Canada, I served the former wife of Canada’s most beloved past prime minister. Margaret Trudeau was a 1970s Canadian version of Jackie Kennedy, except she liked to party and ran away to hang out with the Rolling Stones. She’s legendary.”

Joe: “I recently saw Rob Halford of Judas Priest at Ralphs. Growing up a metal kid, that’s a big deal.”

Jaye: “Not buying the giant framed needlepoint rendition of The Blue Boy that I saw at a thrift store.”

USELESS TRIVIA STUCK IN YOUR BRAIN?

Jaye: “My favorite trivial fact du jour is that the child actress Charlotte Henry, who played Alice in the first movie adaptation of Alice in Wonderland in 1933, ended up moving to San Diego in the 1940s and joining the cast of the Hollywood Burlesque Theatre.”

Joe: “I can name all the pro baseball teams in alphabetical order in ten seconds.”

Jaye: “All the ones I’ve been to have definitely been fake, but I’m not a complete disbeliever.”

Jaye: “I moved here from Brooklyn in 2003 to get my master’s degree in public history at USD and to live closer to my grandparents.”

Jaye: “Google Maps is a great way to walk around a neighborhood or look in someone’s backyard without physically having to go there.”

Joe: “Setlist.com. I’m hooked on seeing the setlists of bands I like so that, when they come to town, I don’t have to go see them.”

Joe: “When I was a kid, every time I broke something and said it was an accident, my mom would say, ‘So were you.’”

SOMETHING ABOUT YOU FEW WOULD GUESS?

Jaye: “When I was 11 years old, I got my mom to buy me a pair of fake black leather pants.”

Wow. I didn't know it was possible to seem so sexy in print. These folks really pull it off.

Wait ex-Trophy Wife?! No wonder its been so long since our last practice.