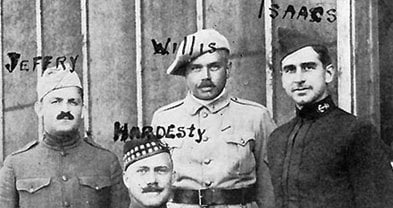 The Best Made Plans

Toward the end of World War I, the Germans boasted that their prisoner-of-war camp on the western outskirts of Villingen was tight as a sealed tomb. A ten-foot-tall, barbed-wire fence surrounded the compound, spikes at the top bent inward to prevent climbers. Inside the fence was a ditch, seven feet wide and filled with spiraled barbed wire, and another fence, this one four feet tall. The camp had 70 German guards. Across the street, a garrison held 575 soldiers. Sentries 25–30 yards apart patrolled day and night. After dark, floodlights kept the open spaces up to 100 yards beyond the camp bright as daylight.

One-story, white stucco barracks held 20 prisoners each. Deep cellars beneath the buildings prevented tunneling. To make sure no one was digging, sentries flash-lit the cellars six or eight times a night.

Harold Willis, a 28-year-old sub-lieutenant of the Lafayette Escadrille shot down at Verdun, said, “The sanitary conditions are indescribable…Villingen is a synonym for filth.”

Along with fleas “as poisonous as German propaganda,” the lethal Spanish Flu hit the Russian barracks just after Willis arrived, on July 9, 1918. German officers refused to isolate infected prisoners. “The well slept in beds two feet from the sick. Two died in the room next to us.”

Edouard Izac, the only U.S. naval officer captured in the First World War, arrived at Villingen “more dead than alive” on July 6 — he’d dived through the window of a troop train going 40 miles an hour. Guards caught and battered him with rifle butts and bayonets, then made him crawl five miles to the camp. Deaf in one ear, grit and pebbles stuck to bloody wounds, and every sinew on fire, Izac passed out on the guardhouse porch. When he came to the next day, he felt like a mummy.

The commandant woke him, roaring, “If you try to escape again, you will be shot.”

“I consider it my duty to escape,” Izac replied.

One consequence of his leaping from the train: whenever American prisoners moved from one camp to another, they now went barefoot.

Villingen was the “most unsanitary place” Izac had ever seen, the latrines the dirtiest. Fleas, he wrote, left permanent scars. Most orderlies were diseased. This was “where I was destined to spend three months of my existence.” He spent every waking second planning to break out.

Prisoners spoke of five or six escapes through tunnels earlier in the war. These attempts, however, had resulted in shored-up surveillance. Guards lived in constant dread of breakouts. If even one prisoner escaped, a guard could go to solitary confinement for at least two weeks — with one meal every four days — or to the front, or worse.

The Germans focused on Izac. He was not only the senior American officer at the camp, he’d already tried to escape. “They could not forgive me for my attempt.”

Nor could he forgive their brutal treatment, which almost took his life. When fellow prisoners told him that learning German would help him flee the country, he refused. “I was determined to exterminate the race and render the further use of their language unnecessary.”

When he arrived at Villingen, Izac had lost 30 pounds and could barely walk. He spent his first two weeks in solitary confinement: a narrow cell, a hard bed, and a little barred window beyond his reach “through which a few rays of light sometimes found their way.” During those “terribly long” days, he did simple stretching exercises and began to regain weight, thanks to food American soldiers smuggled him. Without those morsels, “I should have starved.”

As Izac convalesced, Willis and others planned a way out. They found a weak spot near the fence: a shadow zone where the lights didn’t match up. They constructed ladders from wooden battens and bed slats. They would lean the ladders onto the barbed wire, climb over, and scale down. The day before their attempt, they put the finishing touches on civilian clothing made from uniforms and scraps from other prisoners. They also studied an old map of the Black Forest region around Villingen. The wrinkled paper may have been unreliable, but it was all they had. The goal: head south to the Swiss border in separate groups.

That night, guards discovered the plan. After that, twice as many patrolled the compound. A new wire fence went up at the shadow zone.

As Izac’s health improved, he grew even more determined to escape. He had important information about German U-boats. He knew their routes home. More crucial: he’d learned that the boats were patrolling 100 miles beyond where the Allies thought. So Izac had to break out — not only for himself, but to save lives.

The “lethargy” of the American prisoners appalled him. “Most were content to sit back, eat the food the Red Cross sent,” and wait. They assumed the war would end soon.

By the end of September, however, Izac had recruited 20 American soldiers and began making plans.

An escape, he told them, had three phases: 1) the getaway from camp; 2) moving through the country, and; 3) crossing the border.

As for phase one, Izac rejected tunnels. They took months to dig and were easily detected. “In the four years of the war, over 50 prisoners had escaped from Villingen camp, practically all by means of tunnels,” he said. “Of these, only one crossed safely to Switzerland; and his companion’s body was found near the frontier riddled with, I believe they said, 40 bullets.”

For phase two, he told them to avoid trains. If a prisoner knew German and had clothing that would blend in with civilians, they could hop aboard. Otherwise, steer clear.

Phase three often proved the most disastrous. When they reached the border, writes Dwight Messimer, many prisoners “got careless.” Eagerness caused them “to violate all the rules of caution and make a bold dash for freedom. Inevitably, they were caught, and some were killed.”

The “most heartbreaking problem,” Messimer adds: when they neared the border, if they didn’t have a map, the men had no idea where it was. Some escaped to freedom “only to re-cross into Germany without knowing it.” Or they would approach a German border guard by mistake.

Another must, Izac assured his cohorts, was quality shoes. Interrogators had ripped the soles off his and nailed them back in a shabby manner. “In escaping, a solid pair of shoes was a strict necessity, and we considered a hundred dollars a small price to pay for them,” even for shoes with wooden soles, since leather was scarce in Germany (soldiers and peasants all wore wooden-soled shoes). Izac and Willis bribed a guard and secured proper footwear. They paid full price.

“It was our experience that anyone in Germany could be bribed,” says Izac, “provided you negotiated with him when he was alone.” Some coffee or tea, or a can of meat could work wonders. Soap was supreme. “We used to say, ‘Give me a bar of soap and I will buy the Kaiser’s daughter.’”

Prisoners went on “parole” walks outside the camp. A German officer would escort 10–50 Allied officers. They usually toured the countryside, one hour out, one hour back. To prevent them from running, German officers had the officers sign “word of honor” cards: “I will not make any attempt to escape.” They handed these cards to a sentry at the main gate on their way out.

Runners would be shot. Being officers and gentlemen, no prisoners had tried to escape while on a walk.

Willis would. Using a set of watercolors and a magnifying glass, he forged parole passes for himself and Izac. They read: “I will now make an attempt to escape.” This way, if they got caught, they wouldn’t have lied.

Two days before the scheduled escape, a Russian prisoner went over the wall. Three hundred German soldiers and packs of wolfhounds chased him down. After that, the authorities doubled the interior guard once again. They put 200-watt bulbs in the lamps and constructed a 20-foot-tall wire fence.

They also made an unannounced search of the American barracks. Luckily for Izac, he’d hidden wire chains and screws in the chimney and the ashes of the stove. Others were less fortunate. Guards found maps, compasses, and tools (a file, saw, and wire cutters — together — could cost up to $225). They also noticed that wooden bed slats, used for making ladders, were missing. So they made a thorough search of the entire camp.

Izac and Willis abandoned their scheme. “For the first time I was discouraged,” writes Izac. “We lived a lifetime of hope and fear in the making of [our] plans, and to see them fall one by one was truly disheartening. At this time my fortunes reached their lowest ebb.”

But rather than despair, Izac, Willis, and others planned a major escape. From previous attempts, they’d learned what not to do. They were “experienced veterans in the escape game.”

They would need six teams. Team one: Izac would construct an 18-foot bridge from slats and wooden markers for the tennis courts. He would throw these across the ditch and over the fences. He would also cut the iron bars from his windows.

A second team would use wire-cutters on the fences. A third would throw a ladder over the wire.

Willis’s group, the fourth team, would dress like German soldiers, holding wooden guns painted black. During the escape, when the guards would stream out of the guardhouse, Willis and the others would join them and run through the main gate.

The fifth team would throw weighted chains over the wires and short-circuit the lights. The “circuit men” studied each wire. When the time came, and the signal given, two per wire would kill each one. This was crucial, since a blacked-out camp meant more prisoners could escape detection — and rifle-fire.

A sixth team — which, like the fifth, had no chance of getting out — would load tin cans with rocks and stuff them in large bags. They’d hurl the bags at the walls. The ruckus would create a diversion.

On October 5, Izac learned that all Russian prisoners were to be shipped to other camps in two days. This change would allow the guards to fix their attention on the Americans.

On October 6, Izac announced to his cohorts, “We’ve got to get out tomorrow night. The new moon will be up. Everybody get ready!” ■

Nail-biter of a tale. Eagerly anticipate the next installment.

Eagerly awaiting the next instalment...