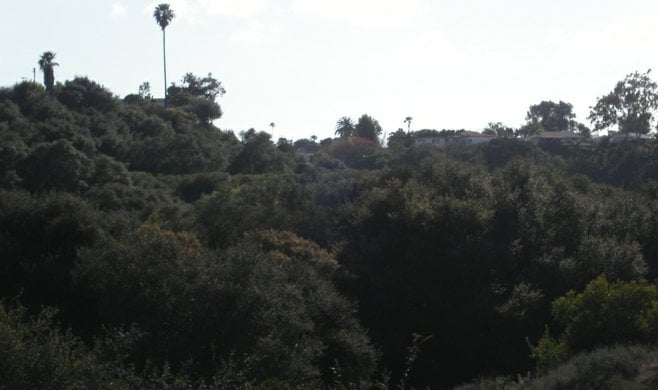 Meth Lab Found in a Clairemont Canyon After Fire

In a letter published this month in the Clairemont Times, District 6 councilmember Lorie Zapf warned area residents to use caution when enjoying our canyons.

The letter was prompted after a fire was extinguished in one of the area’s densely wooded canyons in December. Zapf said it was as no ordinary fire: investigators said it was caused due to a methamphetamine lab located within a homeless encampment. The site of the camp and fire were only yards from residential properties, but none was reported damaged.

The SDPD reportedly apprehended several individuals suspected of being responsible for the lab, and other campers had outstanding warrants for their arrest. The campsite mentioned in the article was near Clairemont Mesa Boulevard and Clairemont Drive. Three tons of waste were reportedly picked up.

Zapf credited the city’s Homeless Outreach Team for its efforts at reversing the upward trend of homeless people in Clairemont.

Gary, Kind of late on this story. The fire was on December 23, 2011 and happened extremely close to my house. Here is a link to some video footage and you can hear the explosions from the meth lab, http://youtu.be/Wo-CiO6t_4k.

I called SDPD 9 times in 2011 to report the activities taking place in this canyon and they have done nothing to remedy this problem! In fact, they didn't even respond to three of my calls and when they did respond no actions were taken. I would have thought that the officers could have at least reported the tons of garbage and debris to Environmental Services, but again nothing was done. The morning after the fire I called SDPD again because the transients were back trying to salvage what they could, 2 hours later the cops arrived but I was unaware that any arrests were made. I personally reported the mess to the City of San Diego Enviro Services and two weeks later the debris was hauled away.

SDPD is a big disappointment! Instead of sitting at a speed trap on Clairemont Drive, they should be fighting real crimes that are taking place daily in our canyons. Oh wait, there is no money in arresting the transients, and it is a lot more work and less profitable than giving out speeding tickets.

Nothing unusual in your story, Jared. What you are experiencing is the do-nothing SD city government in action. It's been that way for decades, and with money shorter now than ever, they have even more excuses for inaction. Too bad someone in the camp didn't get on the wrong side of a cop commander or some other city functionary. They can harass folks unmercifully if they take a notion to do it. In fact, that's where plenty of their skimpy energy and effort go. We moved away from the city of SD in the 80's and I've never regretted the move since.

Jared, Never heard about this until I read Zapf's letter. Thank you for the feedback. Gary