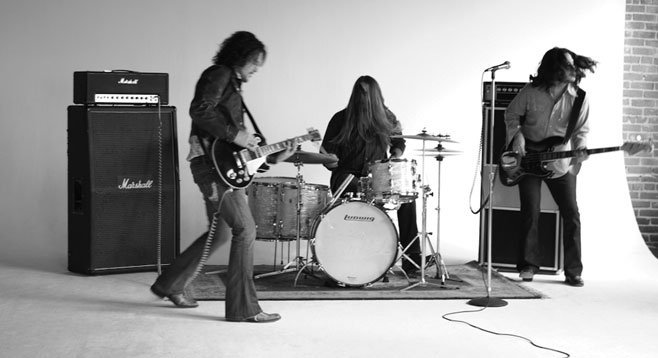 The rise and fall and rise again of the power trio as an art form notwithstanding, the first thing I want to know about the Grass Heat is the name. How did it come to be? Is there a deeper meaning? “I think it just sounded cool,” says Chris Torres, the Heat’s bassist and singer. The band made columns of words on a page and connected them with lines. “The” and “grass” and “heat” made the winning combination. “We wanted something trippy and cool,” says guitarist Billy Joe Clements.

The two musicians are a study in contrast. Torres, with Zen-like calm, scribbles lyrics and hums in the North Park home Clements shares with his wife, dog, and cats, while Clements picks out leads on an unplugged Stratocaster and paces the room. “We come together on the old stuff,” says Torres. ’80s? “’70s!” he corrects, putting something in the way he says “’70s” that makes it clear they are not a big-hair ’80s band. Clements adds that it’s a big, raw sound. “Full [amplifier] stack stuff.”

You get a sense of loud just from the cover art on their debut CD. The three (including Mike Stone on drums) look as if caught in the blast of some mammoth speakers. The image paints a picture, but it’s not of the band’s entirety. They have a couple of songs that sound more R&B than anything. And it’s hard to ignore the melodic lyricism of Torres’s voice, with its Chris Robinson overtone and Leslie West chaser. Torres is 32, lives in Carlsbad, and is gainfully employed by Kris Allen, the American Idol winner (2009). “Last year we were home; the year before we were gone.” This is the main reason the Grass Heat has not been on more local stages. “We only play here about once a month.”